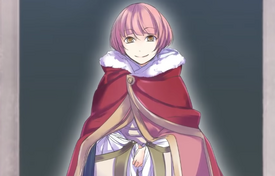 Ma[note 1], or Mem Aleph[note 2], was a title bestowed upon test subjects accepted for Project 'Ma'. Intended for the successful mother of the Twins of God, the title was bestowed upon a number of women over the individual projects. Like the project, bestowing of the title ended with the Levianta Catastrophe, though several Mas survived in the succeeding centuries.

After Project 'Ma' was established in the Magic Kingdom Levianta, the prospective candidate Eve Zvezda was chosen as the project's test subject. Impregnated with the Seed of God, the new Ma was tested for twins as they prepared for the birth of the Twins of God, Cain and Abel.[1] With the fetuses stillborn, Eve fled with her lover Adam Moonlit to Held's Forest in Elphegort and the project was deemed a failure.[2] Eve later married her lover and remained incognito as a woodcutter couple living in the forest.[3]

Once the Leviantan senate sanctioned a second project, the captured Meta Salmhofer was chosen as its test subject and stayed from execution in exchange for becoming the new Ma. After successfully being impregnated, Meta birthed the Twins of God, Hänsel and Gretel, in EC 0. Soon after, she fled with the newborn twins to Elphegort, resulting in the second project's failure.[3]

In EC 001, while traversing Held's Forest, Meta's children were stolen by Eve and she was killed while chasing after the fleeing witch.[4] While Meta continued to be hunted by Levianta, a third test subject was accepted and impregnated with the Seed of God. During the course of testing, the third Ma's frail body gave out and resulted in her death.

After selecting a fourth candidate as the mother of the gods, she was later killed during the project by members of Apocalypse. A fifth subject was then selected and successfully conceived a single child. Due to her failure to produce twins, she was punished and removed from the project. Afterward, a sixth project was sanctioned and accepted a new Ma.

Once she successfully conceived twins, the sixth Ma was abducted by her husband, Wei Lucif; she was later killed while the twins were being extracted from her womb and left in the village of Nemu. With the seventh project established in EC 013, the only surviving candidate, Irina Clockworker, was chosen as the new Ma and began receiving testing. During the experiment, the Levianta Catastrophe occurred, obliterating the Magic Kingdom and leaving Irina severely injured.[5]

Shortly after the disaster, Irina's soul was transferred to a stuffed red cat by Seth Twiright.[6] In EC 014, Eve was killed by her foster children, Hänsel and Gretel. While the twins split her Original Sin, the first Ma was used as the "Demon" for Sloth and scattered across the world.[7] Set on collecting the seven vessels of sin, Irina began searching for the sin while Eve slumbered in her human vessel; Eve was later collected by Irina after she transferred her soul to the Clockworker's Doll as her new vessel.[8]

Over the succeeding years, Eve hypnotized herself into living out different lives every few centuries before being reclaimed by Irina. After awakening from her last incarnation in EC 609, Eve confronted Elluka Clockworker regarding her true nature. During the confrontation, the Ma was extracted from her vessel by Elluka and forced within the mage's soul in an attempt to destroy her.[7] Later on, Irina confronted Elluka at Merrigod Plateau in EC 611 before being defeated.[9] In the wake of the duel, Irina merged with the souls of Eve and Elluka to form a new entity, Ma.[10]

Retrieved from "https://theevilliouschronicles.fandom.com/wiki/Ma_(Mem_Aleph)?oldid=186129"
Community content is available under CC-BY-SA unless otherwise noted.