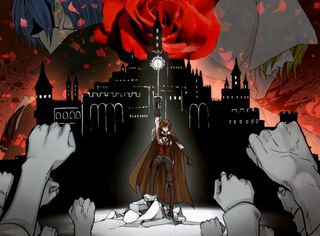 "Let's go! My comrades! The time for revolution has come!"
―Germaine Avadonia[src]

The Lucifenian Revolution[note 1] was the name given to the conflict fought between the Kingdom of Lucifenia and the Lucifenian Resistance and its allies. Lasting only several weeks, the civil war brought an end to the Reign of Evil and was shortly followed by a Marlon occupation.

"I had heard that you joining in the revolution was to get revenge for your father being killed by the princess..."
―Riliane Mouchet to Germaine Avadonia[src]

Following the death of Queen Anne in EC 499, Princess Riliane succeed her as monarch. The government soon after imposed heavy taxes upon its citizens,[1] which was later compounded by a poor harvest sweeping throughout across the kingdom. By order of the princess, the people were left starving during the famine in spite of the government's ability to distribute food from the royal palace's storehouse.[2]

After Leonhart Avadonia was assassinated for smuggling food to feed the citizens, his foster daughter, Germaine, formed a resistance bent on overthrowing "The Daughter of Evil" and ending her tyranny.[3] Following the Green Hunting, the population's rage towards the princess increased and the gradually grew in membership. After the death of his beloved, King Kyle Marlon donned a mask and offered to support the Resistance with his armies.

Bolstered by the masked "Karchess",[4] the resistance continued gaining support while acquiring intelligence from Chartette Langley, a palace maid, and were able to negotiate with Keel Freezis for aid from the Freezis Firm after the businessman was released from government custody. Sending one of his maids to meet with the resistance leaders to confirm his support, the Keel had his business conglomerate send supplies and weaponry to the Resistance.[5]

"This entire time we have continued to be made to suffer! By the nobles! By that abominable princess! But that all ends today! Today is the end of everything, and the beginning! Everyone! Do you all have the courage to fight!?"
―Germaine at the start of the revolution[src]

At a tavern on Milanais Square in Rolled, Germaine led the resistance in ambushing two members from the Venom Mercenaries that were sexually harassing a waitress, causing a fight to break out. After one of the mercenaries return with six of his comrades and attempted to retaliate, the entire tavern of resistance members stood up and the outnumbered soldiers for hire were captured and thrown into the river.[5]

Incited by Germaine Avadonia's call to arms, revolts broke out against the mercenaries in Rolled and the Lucifenian soldiers at Rollam. At the request for reinforcements, the royal palace recalled forces entrenched in Elphegort to help put down threat; unfortunately for them the forces returning from Elphegort were slowed by attacks from its citizens, and the revolts could not be suppressed.[6]

The resistance army sent a division to Rollam, led by Germaine, and engaged the Lucifenian forces there.[6] During the fighting, Germaine encountered and battled Officer Riliane Mouchet.[7] As the Battle of Rollam progressed, the revolutionary leader Sekka Le Corbusier was seriously injured and the battle turned against their favor. In the midst of the fighting, the Freezis Firm's Rollam merchant commanded the middle class citizens against the soldiers and reinforced the revolutionary army. Turning the tides in their favor, the Resistance drove back the Lucifenian army's troops and captured the city.[6]

"The Rolled district is also being hard fought!"
"Rolled–Those damned mercenaries!? We're paying them a fortune, have them do something!"
"But they're being overwhelmed by superior numbers..."
―Lucifenian war minister and Prime Minister Minis[src]

As the tide began to turn in Rollam, fighting resurged in Rolled and the mercenaries were quickly outnumbered by the peasant army. Declaring a state of emergency, the royal palace demanded border forces at Retasan and Babul Desert return immediately and reinforce the contested battlegrounds and sent a messenger to Marlon, asking the ally to send aid overseas.

During the second week of the conflict, revolutionary leader Minage organized the locals in Elphegort into helping aid resistance efforts. Coordinating both armies into a coalition, they effectively blocked off Lucifenia's forces from leaving the nation, trapping them in a prolonged conflict.[6]

The forces at Retasan, commanded by General Gaston Mouchet, and the Babul Desert began their return trip. However, two divisions of disguised Marlon soldiers, led by King Kyle, staged a night raid soon after at both camps. Caught off guard, both Lucifenian forces suffered heavy losses and the masked Kyle slew General Gaston in the fighting.[8]

After defeating the emergency reinforcements, the Marlon troops reinforced the revolutionaries at Rolled against the overwhelmed Venom Mercenaries. With Marlon refusal to bring in more troops, the movement started approaching the palace. The conflict in Rollam also turned in favor of the Resistance and was captured by the revolutionary army. At the end of the revolution's second week, the royal palace received word that Marlon refused to send troops to aid Lucifenia.

Throughout the third week, the fighting at Rolled became increasingly intense. Pushing the Venom mercenaries back, the masked Kyle coordinated with Marc to force them into retreat. As the battle progressed, Karchess encountered the group's leader, Gast Venom, and engaged him in combat. Although injuring his wrist, Marc intervened before Gast could deal the final blow. Although easily killing the revolutionary clergyman, the injured Gast and his forces retreated soon after to the royal palace. With both Rolled and Rollam successfully taken, the armies converged towards the royal palace.[6]

Pressured to capture the royal palace and Princess Riliane before the Lucifenian army in Elphegort returned, the Resistance's forces plowed through Lucifenian and easily reached the main gates. Linking up their forces, Kyle and Germaine broke through into the Heavenly Yard and engaged the final remnants of the Lucifenian soldiers still resisting. Refusing offers of mercy, the two forces clashed. Germaine coordinated her forces to form a ring around the remaining soldiers and press their attack.

With the revolution army vastly outnumbering the soldiers, they began breaking their lines until Mariam Phutapie joined the frey. Slaughtering the Resistance's front lines, the last of the Three Heroes rallied the soldiers to hold the line. Chartette Langley joined the battle immediately after and created an opening for Germaine and Kyle's forces to infiltrate the palace.[6] Engaging Mariam, the two maids went back and forth while the Resistance army entered the palace; injured and at a disadvantage, Mariam used a smoke bomb to cover her escape and fled the scene before being killed by Ney Phutapie.[9]

Dividing their forces again, Germaine and Karchess' teams split. Kyle's forces quickly found Prime Minister Minis Stoup and killed him when he resisted arrest. In the Hall of Mirrors, Germaine's troops were ambushed by Gast Venom and the royal guard protecting Princess Riliane. During their battle, Germaine engaged the mercenary leader and, despite injuries to her eye, successfully killed the Demon of Asmodean.

During the fighting, Riliane swapped clothes with Allen Avadonia and escaped via her room's secret passage whilst the servant masqueraded as her.[6] Soon after, "The Daughter of Evil" was captured in the Hall of Sounds and locked thrown into the palace dungeon. With Gast and Mariam defeated, the royal guard and Venom mercenaries were thrown in disarray. The palace was captured and the capital was taken, prompting the end of the fighting.[10]

"Everyone, thank you for assembling here today. First, I extend my heartfelt congratulations to everyone in the revolutionary army for their victory in the battle."
―King Kyle to the assembly[src]

Five days after The Daughter of Evil was apprehended, a meeting was organized in the Hall of Sounds for all major contributors to the revolution's success. Despite a call for amnesty, it was decided that the Lucifenian soldiers imprisoned in Elphegort would be executed to appease the people. At the meeting, King Kyle spoke as a representative of Marlon and declared the nation's occupation of Lucifenia to guide the rebuilding new government. Despite protests, the attendees agreed to the proposal and concluding that Riliane would be publicly executed to appease the people. Three days later, on December 26th, EC 500, the "princess" was executed in Milanais Square in front of a chaotic crowd, bringing the revolution to an end.[10]

Within the year, the straggling mercenaries of the disbanded Venom Mercenaries were suppressed by Marlon soldiers. In the year that followed, Lucifenia was incorporated as part of Marlon's territories and was faced with rekindled opposition by the members of the Resistance. Demanding Germaine Avadonia's arrest, King Kyle attempted to eradicate the Resistance members and made the Witch Hunting Order.

By labeling Germaine and others as witches, the rebellion members were forced to flee, taking up Retasan and Breck Mountain. In EC 503, both zones were recaptured, with the Lucifenian Resistance being once again forced to leave and flee to the Beelzenian Empire, branded as traitors and war mongerers under Germaine's banner.[11]

"Ha ha, that's nothing. I had thought you'd done all this for a just cause, for justice or peace or something, but it wasn't that at all."
―Allen Avadonia[src]

With the tyrannical rule of Princess Riliane, the population slowly grew more opposed to the government, getting more supportive to the resistance each day. Because of Marlon's aid to relieve the food shortage on the reign, the population's rage diminished a little,[12] only to once increase once more with the Green Hunting. Along with it, many Elphegort citizens joined the cause, starting the Lucifenia-Elphegort War.[4] Although the Kingdom's neighbors were cautious when attacking Lucifenia because of its offensive strength, both the Kingdoms of Elphegort and Marlon provided the revolution with manpower, the latter remaining anonymous throughout the entirety of the conflict.[5]

After the end of the revolution, the resistance members were seen as heroes, with the core members of the group being invited to join the new Lucifenian government. The switch between Allen and Riliane was not discovered by the masses, and the execution of The Daughter of Evil was believed to be a success by the civilians.[10] When Kyle annexed the country to the Kingdom of Marlon, the nation posted propaganda to portray Germaine as a witch and a warmonger who desired to start up another revolution.[11]

Following Lucifenia's independence from Marlon's regime in EC 510, Milanais Square in Rolled became a symbol for the new republic's freedom. Due to its relevance at the start and end of the revolution, the square became a source of pride and patriotism for its populace; following the precedent set by the first elected president, each president of the Lucifenian Republic held their inaugural address at the plaza to honor the nation's revolutionary history.[13]

The events concerning the revolution were later written down by Yukina Freezis, who brought to light the whole truth about the events surrounding the reign of The Daughter of Evil, the Revolution, and its aftermath. Despite this, her claims were regarded as fictitious and historians refused to credit it as an accurate account. However, the tragic tale described by Yukina became widely popular in the 10th century EC, although still unaccepted as a credible view of history.[14]