The Evillious Chronicles Wiki
Register
Don't have an account?
Sign In
Advertisement
in: Groups, Organizations, Lucifenian Resistance,
and 6 more
English 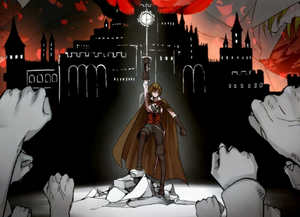 The Lucifenian Resistance[note 1] was an underground revolutionary movement founded and organized by Germaine Avadonia. The group was formed to undermine the tyrannical reign of Princess Riliane Lucifen d'Autriche and overthrow the Kingdom of Lucifenia's corrupt government, backed by several foreign benefactors.

"There're many who hold animosity toward the royal palace. Gathered a fair number of people. But most of them are amateurs who've never so much as held a sword."
―Minage[src]

Following the assassination of Leonhart Avadonia at the Lucifenian Royal Palace, his daughter, Germaine, founded the Resistance along with York Le Corbusier, his daughter Sekka, Marc, and Minage in EC 500. Meeting at the abandoned house in the Lost Woods, the seditious rebels regularly met to discuss their progress towards revolution.[1] Securing an information feed via Chartette Langley, the resistance gathered information necessary for their intended coup and secured the support of King Kyle and the Kingdom of Marlon following the Green Hunting.[2]

"This is hardly a problem. The majority of the rebel forces are nothing but people from the lower class moving on citizens of the middle and upper classes... the number of soldiers on our side gives us an overwhelming advantage!"
―Prime Minister Minis Stoup[src]

Using the alias of "Karchess", the Marlon king supplied his soldiers as part of the Resistance's garrison and membership skyrocketed from both Lucifenia and Elphegort with the Lucifenia-Elphegort War inciting the people's anger. Through their palace contact, the Resistance was able to meet and negotiate with Keel Freezis to use his vast resources to support the Resistance's revolution. With the merchant's support, the Revolution became well armed and supplied for war.[3]

Afterward, Germaine and her forces gathered at a local tavern on Milanais Square in Rolled and ambushed a group from the Venom Mercenaries harassing a waitress. Subduing eight of the troops and throwing them into the river, Germaine gave a speech to the crowd assembled outside, sparking the revolution. The resistance fighters coordinated their attacks to isolate the royal palace from the main army and link up with the Elphegortean military.

With the support of the Freezis Firm and Elphegortean royal government, the revolutionaries won the battle in Rollam after several weeks of fighting, along with cutting off the Lucifenian army's reinforcements in Elphegort, Retasan, and the Babul Desert. After their victory in Rolled, the two Resistance armies converged and assaulted Lucifenian. Making their push through the capital, the revolutionaries raided the royal family's estate, successfully defeating the Royal Guard and capturing Princess Riliane.[4]

"Ignoring that fact, once I told him that, he became furious and punched me in the face... Honestly, even though violence against prisoners is prohibited under Marlon law. Germaine, you'll be careful around him from now on, won't you?"
―Allen Avadonia regarding Kyle Marlon[src]

In the ensuing peace talks, the Resistance leaders were offered positions in the new Lucifenian government under Marlon's guidance with King Kyle as its governor and the group unofficially disbanded.[5] After Marlon annexed Lucifenia the following year, York and Minage fled the royal palace and reformed the Resistance at Breck Mountain, amassing forces to combat Kyle's regime. Soon after, the resistance battled the armies of Restan Fortress and eventually pushed them back, capturing the fortress in EC 502. With a counterattack from Commander Riliane Mouchet in EC 503 defeating them at both Breck and Retasan, the Resistance fled across the border to the Beelzenian Empire.[6]

"The Langley Unit used to be in the Lucifenian Revolutionary Army... Its members were the original resistance army."
―Chartette Langley[src]

Harbored as political fugitives, the Beelzenian Emperor offered them protection in exchange for their services as part of the army. Soon after, revolutionary heroes Germaine Avadonia and Chartette Langley rejoined the Resistance and, in EC 504, the Langley Unit were recruited and garrisoned in Rucolebeni near the border with the former Lucifenia territory and Retasan Fortress, unofficially disbanding once again.[6]

The Lucifenian Resistance was headed by a revolutionary leader. Under said leader were their subordinates, each tasked with organizing a different aspect of the revolution such as securing manpower or supplies. As an underground movement, the resistance maintained a distinct knocking code for its base in order to ensure its secrecy.[1] Following the recruitment of Chartette, the group also possessed a direct information feed from the Lucifenian Royal Palace.[2] Later on during the revolution, the revolutionaries' numbers were bolstered by soldiers from the Marlon military.[3]