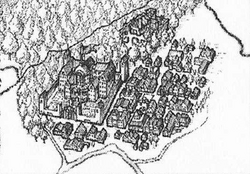 Lucifenian[1] was the capital city of Lucifenia, located along the Orgo River. The city bordered the Forest of Bewilderment near Elphegort and was the site of the royal palace for the Lucifenian Royal Family. Throughout its history, it remained a political and economic center for the nation.

After the Kingdom of Lucifenia was established by Lucifenia I in EC 399, Lucifenian was made the capital of the new nation and the Lucifenian Royal Palace was constructed just outside the main city.[2] Sometime before EC 500, a group of bandits camped just outside the city and captured the daughter of a local blacksmith, the girl rescued afterwards by Leonhart Avadonia's adopted children.[3]

With the rest of the kingdom, the people of Lucifenian became increasingly desperate and dissatisfied with the Lucifenian Royal Family during the reign of Princess Riliane, high taxes and countrywide famine making most in the city destitute.[4] In EC 500 the residents of the city discovered Leonhart's dead body in the city's river, many concluding that he was assassinated on Riliane's order. His funeral was also held outside the palace, attended by his friends, subordinates, and relatives.[5]

The Lucifenian Resistance formed from a handful of residents in the city not long after Leonhart's funeral, beginning to reach out to the citizens disillusioned with Riliane's rule. While citizens were temporarily placated by financial support from Elphegort and Marlon,[6] public opinion dropped again with the Lucifenia-Elphegort War.[7]Following the release of the Freezis Family from imprisonment, Keel Freezis and his family were placed under house arrest at the merchant, Corpa's mansion.[8]

As the Lucifenian Revolution expanded across the kingdom, the Venom Mercenaries retreated to the capital in December of EC 500 and made their last stand with the Lucifenian army there against the resistance army. The city was captured and the revolutionaries invaded the palace soon afterwards, capturing and imprisoning the alleged princess.[9] As the riots continued over the next few days, the Marlon army occupied the city and put down the remaining violence.[10]

Following Lucifenia's occupation by the Kingdom of Marlon, King Kyle continued to use the former capital as his residence to govern the territory with the ministers. The city was later annexed by the Blue Country along with the rest of Lucifenia's territory in EC 501.[11] Once Marlon completely reinstated Lucifenia's independence in EC 510,[12] Lucifenian continued to act as the governing capital for the new republic.

On May 23, EC 610, the Lucifenian chief officials met with the leading members of the Freezis Foundation at the Lucifenian Palace. A Justea unit later interrupted the meeting and arrested Kaidor Blankenheim, disguised as Bruno Marlon.[13] Sometime after, the palace was retired as a government work building and became a popular tourist attraction for Lucifenian.[14]

In EC 998, Lucifenian was completely decimated by Punishment. Following the end of the Third Period and its subsequent merging with the Hellish Yard,[15] Princess Riliane reconstructed an illusion of the palace along with numerous souls from her lifetime. Afterward, the Princess held a dinner party at the palace. Later during the festivities, the Eighth Gift spread into the air and began putting all the attendees to sleep.[16] The poison was later sealed away.[17]

The political center of Lucifenia as well as the home of the Lucifenian Royal Family.[18] After the Lucifian Revolution and during Marlon's occupation, it served as the governing residence of King Kyle Marlon.[19] After Lucifenia's independence was reinstated and it was made a republic,[20] the palace became a government work building before being closed and made a tourist attraction.[21]

The home of the Rogzé family in Lucifenian. The residence held a laboratory for experimenting with medicines and other chemical compounds.[22]

The home of the merchant, Corpa. The mansion was very spacious and maintained a large garden outside.[23] After the Freezis Family was freed from Lucifenian confinement, they were placed under house arrest at Corpa's mansion before fleeing to Marlon.[24] After Marlon added Lucifenia as a territory, Corpa began holding banquets regularly at his mansion to celebrate his booming business.[25]

The home of the Avadonia family. Leonhart Avadonia lived in the house, outside the palace, with his two adopted children.[26] It is unknown what became of the residence after Germaine Avadonia left on her travels abroad.

The home of the Langley family. Run by Chartette's father, the residence served as a blacksmithy for Lucifenian and was visited by many clients, including the Three Heroes, for weapons repairs. In the lead-up to the Lucifenian Revolution, weapons for the Resistance were also made in the smithy.[27]

A river running through the city, the bank not far from the Avadonia residence. The cities of Rolled and Lucifenian were situated along its banks. Leonhart Avadonia's dead body was discovered in the river after his assassination.[28]

A Levin graveyard located on a hill outside the palace. Leonhart's funeral took place on the hill after his body was recovered from the river.[29]

A center of the Levin faith, used as both a gathering place for parishioners of the faith and members of the clergy. The bells of the church would ring each hour to communicate the time to citizens, and were loud enough to be heard from the Palace.[30] It was considered a blessing to be born while the bells were ringing in the town.[31]

Retrieved from "https://theevilliouschronicles.fandom.com/wiki/Lucifenian?oldid=124941"
Community content is available under CC-BY-SA unless otherwise noted.