The Evillious Chronicles Wiki
Register
Don't have an account?
Sign In
Advertisement
in: Events, Lucifenia, Elphegort,
and 6 more
English 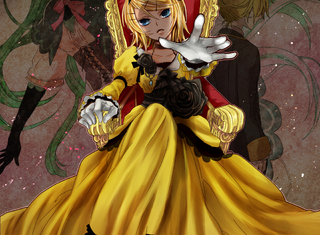 In EC 488, Prince Kyle Marlon developed a crush on his green-haired tutor Margaret. One year later, Margaret and her husband committed suicide via poison through his mother, Queen Prim Marlon's schemes.[1] After the death of his father in EC 494, Kyle Marlon was crowned sovereign of the Kingdom of Marlon and later became acquainted with Princess Riliane of the Kingdom of Lucifenia.[2]

Due to political affairs, it was determined by their parents that they were to be betrothed and married when the princess turned fifteen. As they became close childhood friends, Riliane developed a crush on the Marlon King.[3] Despite this, King Kyle viewed Princess Riliane as a sister, holding only platonic feelings for her.

During one of his visits to the Freezis Mansion in Elphegort, he met one of their servants, Michaela.[4] Shocked by her resemblance to Margaret and her beauty, Kyle instantly became enamored with her.[1] As a result of his feelings, Kyle gave a letter to Prime Minister Minis Stoup of Lucifenia for Riliane in EC 500, stating he was withdrawing their engagement to be with a "green-haired girl" he had met instead.[3] Afterwards, he prepared to travel to Elphegort but was place under house arrest and imprisoned by his mother.[4]

Although deemed impossible because of the Millennium Tree Forest between them, the princess ordered the forest burned to quicken the invasion. In opposition, Elluka Clockworker argued that Held, the god present in the forest would be affected and was met with Riliane's order to have the mage executed. The sorceress then immediately fled with her green-haired apprentice, Gumillia.

That night, the Lucifenian army set fire to the forest and the members of the Lucifenian Resistance attempted to douse the flames in opposition of the army. Soon after, Elluka and Gumillia conjured a rainstorm and ended the fire. With nearly half of the forest destroyed, the army swiftly marched into Elphegort the next day and launched a surprise attack on the Elphegortean army. Overwhelming their forces, the Lucifenian soldiers began enacting the genocide of its green-haired female population and anyone attempting to resist them.[5]

During the day, the first army, led by General George Ausdin, quickly moved north from southern Elphegort and arrived in its capital of Aceid within the day. In one of the nation's villages, Yatski, the army swiftly slaughtered all the women and several men who attempted to stop them.[4] Once the army reached Toragay, its resident Earl Felix was arrested and deported to Lucifenia and the army occupyied the city as its base of operations. Pushed out of the capital, King Thorny Elphen and his forces retreated up north to Toragay to hold out.[6]

Having learned of the conflict beforehand, Keel Freezis sent the intended target, Michaela, with her close friend Clarith en route to the Freezis' hiding place in a well in the Millennium Tree Forest; in collaboration with Kyle, they planned to have Michaela moved to Marlon for safety when the king arrived the following week.[4] At the same time, the merchant had his staff flee in small groups and attempted to escape with his family. When the Lucifenian army arrived in the northern district, they confiscated Keel's collectibles and burned down the mansion.[6]

Afterwards, Ayn attempted to protect Clarith from the soldier but was killed via an arrow.[4] The white-haired girl was arrested and sent to Toragay for questioning and remained silent for two months despite Daniel Ausdin's frequent interrogations.[6] Around this time, the Freezis Family was arrested and imprisoned at the Lucifenian Royal Palace's dungeon in Lucifenia.

After Keel divulged Michaela's location to the servant, Allen Avadonia, he visited his romantic interest to assure her safety. Having overheard Keel's conversation with Allen, Ney Phutapie reported Allen's knowledge and actions to Princess Riliane. In response, Riliane ordered Allen to kill the girl.[5] The following night, Ney, disguised as the servant, arrived at the well and assassinated Michaela shortly before Allen's arrival.[4]

Although her death was confirmed to the princess, the ministers proposed using the opportunity to conquer Elphegort, and the fighting continued. During the period, Holy Levianta sent a message remonstrating the Kingdom of Lucifenia for invading their ally and were ignored. On their own, the remnants of the Elphegortean military held out against Lucifenia's forces.[7]

Having discovered Michaela's corpse in the well upon his arrival, King Kyle disguised himself as "Karchess" and supported the Lucifenian Resistance with Marlon soldiers. Around the same time, civilians of Elphegort joined at an increasing rate in opposition of Riliane's tyranny.[7] Two months into the fighting, Keel Freezis was released from custody and placed under house arrest in Lucifenia. Through Keel's connections, Corpa of the Evillious Commerce Alliance took in the family and freed Clarith from the army's custody.[6]

The resistance later negotiated a deal with the merchant, using the Freezis Firm to help supply the revolutionary army with weapons and aid.[7] Armed, the revolutionaries caused riots throughout Lucifenia. With the armies stationed in Elphegort recalled to help put down the threat, the citizens began harassing the soldiers and stalling their return trip.

In the second week of the revolution, a fellow Elphe of the Resistance, Minage, contacted King Thorny and negotiated their support in their civil war. Coordinating with the revolutionary army, the Elphegort military effectively blocked off Lucifenia's forces from leaving the nation, trapping them in a prolonged conflict. After the Lucifenian Royal Palace was captured, the Lucifenian soldiers in Elphegort surrendered and the fighting ended.[8]

Five days after "The Daughter of Evil" was apprehended, a meeting was organized in the Hall of Sounds for all major contributors to the revolution's success. Despite a call for amnesty, it was decided that the Lucifenian soldiers imprisoned in Elphegort would be executed to appease the people. At the meeting, King Kyle spoke as a representative of Marlon and declared the nation's occupation of Lucifenia to guide the rebuilding new government. Despite protests, the attendees agreed to the proposal and concluding that Riliane would be convicted and she was publicly executed three days later.[9]

With their population decimated by Riliane's efforts to exterminate their Elphe female population, Elphegort spent decades recovering from the brutal genocide,[9] remaining passive in future foreign affairs for at least the following decade. As a result, the Green Country laxed its historical foreign prejudice and developed into a more racially diverse society by the next century.

When King Kyle adopted Lucifenia as part of Marlon's territories, Elphegort didn't oppose their new neighbor's increasingly militaristic policies; during the period, it was blocked from trade with the island nation and its Lucifenia territory, save for within said Marlon territory.[10] After Lucifenia's sovereignty was restored, Elphegort repaired relations with the new Lucifenian Republic by the end of the century.[11]

As the war with Elphegort dragged on, preexisting resentment for Princess Riliane and her rule intensified among Lucifenia's citizens and the war became another example of her tyranny.[7] Similarly, Elphes became outraged by the civilian massacre caused by the Green Hunting and incurred deep hatred of the Lucifenian soldiers occupying their nation.[9]As a result, support for the Resistance grew exponentially and membership for the revolutionary group increased throughout the war.[7]

When word of Michaela's death reached their ears, the Elphes were enraged by the murder of their beloved Diva and steadily began to resist the occupying forces.[12] Once the civil war sparked in Lucifenia, Elphegort's people swiftly assisted in harassing the Lucifenian soldiers and slowing their return trip.[8] With the end of the war, outcries were made in Elphegort for retribution, but due to King Thorny's pacifist policies, the soldiers imprisoned in the Green Country were not executed for their participation in the war; similar spite was held towards Riliane, and The Daughter of Evil received no sympathy from the masses.[9]