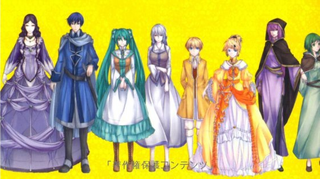 This is a list of human races and ethnicities that have appeared or are mentioned in passing in the Evillious Chronicles.

Almoga Mobarez[note 1] was an ethnicity of human native to Asmodean. The ethnicity was characterized by its members wearing wooden masks to prevent exposing their faces and never taking them off. Although an ethnic minority, it was generally tolerated within the borders of Asmodean and its members typically did mercenary work.[1]

Asmodean[note 2] was a race of humans native to Asmodean. Attributed to the country's geographical placement and history, Asmodeans were diverse in appearance. As part of this, they ranged in hair colors from silver to purple. The race's skin color also varied, with members having both pale or dark tones.[2]

Black Valkyria[note 3], also known as Maistians[note 4], was an ethnicity of human native to Maistia. Its members were characterized by their brown skin and dark hair, and were mostly enslaved.[3]

Beelzenian[note 5] was a race of human native to Beelzenia. Owing to their history, Beelzenians varied in appearance but typically had red or brown hair and similarly-colored eyes.[2]

Elphe[note 6] was a race of human native to Elphegort. Modeled after Held's human form in the Second Period,[4] Elphes were known for their pale skin, green hair and green eyes. Despite their homogeneity, like most other races Elphes could be born with varying appearances, such as having different shades of hair.[5] In EC 500, a significant portion of its population was wiped out during the war between Lucifenia and Elphegort.[6] Although not as intolerant as the Jakokuese, Elphes were largely known for their discrimination of foreign ethnicities.[7]

Jakokuese[note 7] was a race of human native to Jakoku. Its members were characterized by their pale skin and black hair.[8] The Jakokuese were known for their outright intolerance of foreigners within their country, being even more discriminatory than Elphes; this intolerance could sometimes devolve into outright bigotry.[9]

Leviantan[note 8] was a race of human native to Levianta. Members of the race had varied appearances owing to the country's history, and several members were organized into clans possessing magical power.[10] Some also had the chance to inherit the powers of the gods.[11] After the Levianta Catastrophe, the race was largely wiped out, although there were several survivors to continue the lineage.[12]

Loop Octopus[note 9] was a race of humans native to Levianta, characterized by their pale skin and pink hair. Members of the Loop Octopus Clan were also the sole possessors of the prophetic dream ability.[10] Following the Levianta Catastrophe, a majority of the clan's members were wiped out, though there were a few survivors that eventually assimilated into the Asmodean population.[12]

Lucifenian[note 10] was a race of human native to Lucifenia. Owing to its history, Lucifenians were diverse in appearance and could have hair ranging from black to red, although blonde hair was also not uncommon.[13]

Marlon[note 11] was a race of human native to Marlon. Although typical Marlons had pale skin and brown or black hair, male members of the Marlon Royal Family were known to have blue hair and blue eyes. Marlon men were also stereotyped as having a strong addiction for collecting things.[5]

Mogura was a race of human native to Elphegort during the time of the Magic Kingdom Levianta. The Mogura people devoted themselves to excavating the technology of the Second Period buried in Elphegort.[14]

Mukokuese[note 12] was a race of humans native to Mukoku, characterized by their medium-toned skin, black hair and black eyes. The Mukokuese practiced a political policy of isolationism, with foreigners invariably excluded from their borders.[15]

Netsuma was a race of humans native to Jakoku,[16] and later Elphegort.[7] They were characterized by their pale skin, red eyes and white hair. Due to their previous history of terrorism,[16] Netsumas suffered from severe persecution by devout Levin believers and became few in number by the EC 500s,[7] although eventually experiencing a resurgence in the following centuries.[17] During the time of the Magic Kingdom, they were inheritors of Salem.[14]

Retrieved from "https://theevilliouschronicles.fandom.com/wiki/List_of_Human_Races?oldid=191838"
Community content is available under CC-BY-SA unless otherwise noted.