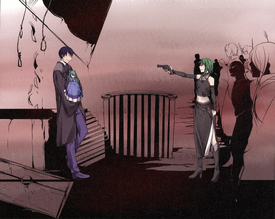 The Leviantan Civil War[note 1] was the name given to the conflict in Levianta resulting from the exoneration of USE General Tony Ausdin by the Dark Star Bureau Director Gallerian Marlon. In response to Gallerian's corruption, riots broke out across Levianta and resulted in the deaths of both men.

Following the death of his wife and daughter,[1] the Director of the Dark Star Bureau Gallerian Marlon began engaging in increasingly corrupt court practices, exonerating criminals in exchange for kickbacks while the wealthy were able to pay to have their political opponents jailed.[2] As a result, public disapproval began to build as innocent people were convicted while killers, sexual offenders, and other criminals bargained for their freedom.[3]

During this time, the judge, under the alias of "First Santa Claus", also made use of the bureau's private espionage force, PN, to remove any and all opponents to his policies, including an assassin, Nemesis Sudou, codenamed No. 8. In December of EC 982, he sent an order for her to kill her own lover. Following the completion of her mission, Nemesis swore vengeance on the judge.[4]

In early EC 983, General Tony Ausdin was charged for the massacre of Zenosai village and placed on trial; with Gallerian presiding over the trial, the judge was bribed and exonerated Ausdin of his apparent crimes.[5] Soon after, the Tasan Party leaked evidence of Gallerian's corruption to the press. With the populace already enraged over the world's strange phenomena and the ongoing global war, citizens' outrage exploded into riots beginning in Alicegrad, with civil war eventually breaking out across Levianta.

In response, the USE government sent in World Police soldiers to stifle the populace. With the soldiers failing, the USE later sent in the military. During the riots, dissenters targeted those benefited by Gallerian's corrupt rulings, with Jason Jack being the first casualty of the conflict. Bindi Freezis was later targeted by the citizens, prompting him to leave Alicegrad before being killed in Lunaca Labora by the forces of the Yarera-Zusco Conglomerate.

As the civil war progressed, several USE soldiers defected and began aiding the rioters. In August of EC 983, the people's militia seized the Dark Star Courthouse. Met with resistance from PN, the courthouse fell after 18 hours of fighting and the rioters successfully captured PN's leader Bruno Zero. They then sought out and killed Tony, shooting him 40 times and leaving his mangled corpse exposed in his yard.

Later on, the citizenry surrounded Gallerian's mansion and set it on fire.[6] Gallerian was then approached by Nemesis;[7] with the judge refusing to return everything he stole from the people,[8] he was killed soon after and his body was left in the burned down mansion along with much of his collection.[9] Around six months later, the USE was able to put an end to the civil war.[10]

Following the riots' end, the deaths of Gallerian and General Ausdin were processed. As according to his will, the vessels of sin the judge had collected over the course of his corruption were handed over to the playwright Ma, who took them to a theater that had been built in the Millennium Tree Forest.[11] Nemesis Sudou was afterward charged for Gallerian's murder and subsequently imprisoned for some time before being pardoned. Becoming the leader of the Tasan Party, Nemesis grew to become the absolute dictator of Elphegort.

The citizens of Levianta were enraged at the corruption of the Dark Star Bureau, frustrated with the ineffectual legal system plaguing the nation's government. As a reflection of his greedy nature, Gallerian was attributed with the moniker "the Collector" by later generations[12] and his policies left a dark stain on the reputation of the Dark Star Court.[13] Not understanding the cause of this greed, the people saw no use taking his collectibles and were instead only concerned with taking his wealth and property.[11] Public outcry also rose specifically over the exoneration of General Tony Ausdin, the citizenry outraged at such a ruthless killer being set free and this outrage sparking the initial conflict.[12]

Retrieved from "https://theevilliouschronicles.fandom.com/wiki/Leviantan_Civil_War?oldid=191551"
Community content is available under CC-BY-SA unless otherwise noted.