The Evillious Chronicles Wiki
Register
Don't have an account?
Sign In
Advertisement
in: Events, Levianta, Union State of Evillious,
and 3 more
English

"The USE unified government has concluded that the cause of this progression of bizarre occurrences is that they are done by the magic of ‘witches’."
―Hanma Baludred[src] 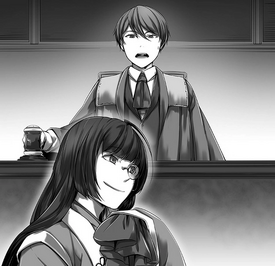 The Levianta Witch Trials were a series of trials for the alleged witches in the USE. Conducted by the Dark Star Bureau, the defendants were usually given the death penalty before the pattern was upset by Judge Gallerian Marlon.

After Elluka "Ma" Clockworker became an enemy of the Freezis Family, the plutocrats decided to eliminate her and all other magic users that could possibly oppose them. Building on the word of the scholar Heaven Jaakko, they spread the claim to the public that alleged witches were to blame for the strange phenomena happening around the world.[1]

As the World Police found numerous people guilty of witchcraft; the Dark Star Bureau in USE Levianta then tried the accused witches, giving them the death sentence every time. In EC 944, Elluka Clockworker was convicted for witchcraft, her murder of Mata Corpa, and her theft of the Marlon Spoon in Mata's possession.[2] Her apprentice, Judge Hanma Baldured, later gave her the death sentence in order to exploit the bureau's law that no person could be given the death sentence twice. Elluka then escaped and forged a new identity as "Kayo Sudou".[3] Later on in EC 958, Lana Ray was tried for allegedly communing with the spirits of Held in the Millennium Tree Forest.[4]

At some point, the Freezises discovered Elluka's tactic and decided to have her indicted once again.[3] In EC 960, Kayo was tried for casting lightning magic on two anti-witch extremists as well as illegally screening movies in a theater. After the presiding judge, Gallerian Marlon, exonerated her, Levianta's Java Gazette reported the incident as the first witch ever being declared innocent.

Soon after, Gallerian was given a suspension by Hanma;[5] he then encountered Kayo and collaborated with her in indicting Loki Freezis before recruiting her into the bureau as a consultant in EC 962. Guided by Kayo's knowledge, the bureau declared all alleged witches innocent until EC 964.[3]

Due to the strange phenomena happening around the world, many people were upset about said phenomena and were willing to blame it on alleged witches. As a result of Heaven's writings on witches, belief in them resurged despite many previously considering them to be a product of fiction and fairy tales.[2] Despite the previous stereotype of witches being female, people readily applied the term to all magic users regardless of gender.

Hatred towards these alleged witches was also widespread, with an extremist anti-witch movement existing in Levianta. As the years passed, however, witch trials became commonplace and were no longer regarded as a spectacle due to the sentence being the same every time. After Kayo Sudou was declared innocent, the public was shocked by a witch being acquitted and the Java Gazette reported the incident.[5]