"Lord Kaspar—No, I’ll dispense with the honorifics with him. To speak bluntly, that man was the lowest of the low."
―Rita Flohn[src]

Kaspar Blankenheim, codenamed Second Dealer, was the Marquis of Toragay in Elphegort and the husband of Margarita. After facing financial trouble, he married the Felix Family daughter for her father's wealth. He later joined the criminal organization Père Noël as its black market dealer to maintain his affluent lifestyle and array of mistresses.

"Before I left my family, I entrusted my own son in the care of my younger brother—Karl."
―Kaidor Blankenheim[src]

Born in Toragay on August 30, EC 588, Kaspar's father Kaidor Blankenheim entrusted him to his uncle, Karl, shortly after killing his own wife. With his real father expelled from the family as a fugitive, Kaspar was raised as the son of Marquis Karl and his wife. During his youth, his father arranged for him to meet many girls as potential marriage candidates and he romanced each of them over the years, promising to marry them.

Among those candidates was Margarita Felix. After the young Margarita moved into the Blankenheim Mansion, Kaspar played with her often and the two eventually became more intimate, with Kaspar promising to marry her with a wooden ring as he had done for the rest.[1]

"It’s a bit lonely in here, isn’t it?"
"I used to have a lot of things in it. They’ve all been sold off now."
―Hanne and Margarita painfully admitting the truth[src]

Following Margarita's return home and later his father's death, Kaspar inherited the family title of Marquis and wasted his fortune on Finé cigars from Maistia and other luxuries. He also befriended Cle Mence, son of the Marquis of Nianemu. As his fortune began to deplete, Kaspar decided to marry Margarita and acquire her father's fortune for himself.

Around EC 608, he and Dr. Felix agreed to a political engagement between their two families through him and Margarita, marrying her in June of that year in a public ceremony.[2] During their subsequent honeymoon, Kaspar bought Margarita a bed for her new room in the Blankenheim manor; he shortly after discovered Margarita's sleepless condition and, disgusted, began sleeping in a separate room from her.

Soon after, the Marquis began taking on numerous mistresses and periodically invited them to his home,[1] forbidding Margarita from entering his room whenever he had them over.[2] As time progressed and their finances began to dwindle, Kaspar sold off many of Margarita's personal possessions to help recuperate their losses; he also began firing many of their servants to cut costs.[1]

"That was close to one thousand Ev. Not the sort of thing you’d expect an impoverished marquis to be able to buy several of so freely. …Which means there’s a chance he had a means to earn money no one else knew about."
―Ayn Anchor regarding Kaspar[src]

Sometime in EC 608, Kaspar was approached by a woman calling herself "Elluka Clockworker".[2] Claiming to be the leader of Père Noël, First Santa Claus, Elluka asked the Marquis join the organization as their black market dealer in Elphegort, offering him a chance to make a profit for himself with some of the earnings;[3] in exchange, the woman asked him to give her the golden key in his family's possession.[4]

Kaspar accepted the offer and joined the organization, codenamed Second Dealer.[3] Setting up the market in his mansion's basement,[2] the Marquis donned a mask and began buying and selling products to his shady patrons.[5] As he acquired numerous goods through his illegal channels, he began storing the products in the basement's warehouse.[2]

Raking in major profits, the Marquis secured his luxurious lifestyle while sharing his earnings with the whole of Père Noël;[3] over time, First Santa Claus periodically visited Kaspar and checked in his operations.[1] He later introduced his "business partner" to Margarita and his wife joined the organization sometime after.[1]

In EC 609, Santa ordered Kaspar to help enact a single operation: monopolize a cure for an airborne Gift epidemic that they would create and release for the organization's profit. Once Margarita developed an incomplete variant of the cure, Kaspar began selling the stimulant on the black market before it or the actual Gift epidemic were complete.[6] He eventually began keeping all his profits from his shady dealings for himself, claiming to be First Santa Claus to customers;[1] later on, he gave one of his customers, Sixth Venom, the original copy of the Freezis Fairy Tale the "Flower of the Plateau".

As Kaspar began to suffer from insomnia, Marx began to regularly visit the mansion and examine the marquis' physical condition.[5] On August 24 of that year, Kaspar and Margarita attended King Soil's birthday celebration at his castle in Aceid before returning home late that night. The next day, Elluka visited and quarreled with Second Dealer over his cheating Père Noël's underground market before leaving.[1]

On August 30, EC 609, Kaspar celebrated his birthday with one of his mistresses at the mansion. Late that night, Margarita offered her husband some toast covered in trauben jam as a gift, saying it would help him sleep. Accepting the birthday present, Kaspar shared it with Eleanor and they consumed the toast. Unknowingly poisoned, the two succumbed to Margarita's Gift shortly after, dying in each other's arms.[7]

"Anyhow, if I dispose of you two, I'll become the next Second Dealer... I was promised that."
―Kaidor to Hanne and Heidemarie Lorre[src]

Kaspar and Eleanor's bodies were discovered by Dr. Marx and Margarita the next day.[7] After a quick diagnosis, Marx covered for his daughter and claimed it to be a result of Kaspar's smoking habit. After the World Police's subsequent investigation and Dr. Puerick Rogzé's own autopsy of the corpse, Marx's diagnosis was accepted as the Marquis' official cause of death. When Dr. Marx was found in a coma with the same symptoms less than a month later, the police reports changed his cause of death as being the result of an unknown disease.

Kaspar's funeral was held at Toragay's church nearly a month after his death and was attended by the entire town and royalty from both Elphegort and Marlon; Margarita served as his chief mourner. In response to the alleged tobacco causes, Elphegort entered a joint agreement with Lucifenia and Marlon to limit imports of the product despite facing opposition from many aristocrats and businesses.[2] The first in a multi-part tribute to Kaspar and his life was published in the Schuburg Newspaper's 61st issue,[1] though subsequent parts were delayed and inevitably cancelled due to the current events.[3]

Schuburg Newspaper reporter Hanne Lorre continued investigating Kaspar's mysterious death and alleged connection to Père Noël, uncovering much about his past and shady dealings.[2] Julia Abelard later criticized Kaspar among others' self-serving actions in Elphegort, lamenting how his murder by Margarita had lost her a valuable pawn.[4] Kaspar's biological father, Kaidor, later replaced his son as Second Dealer a few months after his death, taking over the black market.[8]

"Spending all his time playing around and picking up other women every day while he had a wife like Margarita around—I’ll say it again, that bastard was utter trash."
―Rita Flohn[src]

Kaspar was a selfish, conniving, and hedonistic man. Since childhood, Kaspar Blankenheim prioritized his own physical needs over emotional relationships, becoming close with multiple women as potential marriage candidates and yet selecting them for their financial prospects over any romantic sentiment.[1] Continuing into adulthood, Kaspar lived largely for his pleasure and expensive tastes.[2] He thus partook in illegal activities in Père Noël to fund his addictions, even monopolizing the black market for himself and arguing about his activities when confronted.[3] He similarly thought nothing of selling even his own wife's possessions for money.[1]

Kaspar put up a polite front when the situation necessitated it, being able to make a select few friendships and being capable of romancing multiple women even from a young age.[1] Though able to form such relationships, Kaspar was only loyal to himself and looked after his needs before others'. Shameless in his philandering and disloyal to Margarita, treating her with disdain and disrespect,[1] Kaspar displayed no concern for others' opinions and had no worries over potential consequences for his actions, trusting Margarita and careless in his monopolizing of Père Noël's black market.[5]

"Margarita, Kaspar, and even Mayrana―I've lost very useful pawns thanks to them."
―Julia Abelard[src]

As the feudal lord of Toragay and head of the Blankenheim house, Kaspar had a great deal of influence within the town and an impressive affluence inherited from his father.[1] However, due to his spending habits, much of his family's fortune was depleted within a short period, forcing him to rely on Margarita's dowry to maintain his rich lifestyle.[2] After becoming Second Dealer, Kaspar became very successful in making illegal transactions within Toragay's black market and obtained products from all over the world for himself and his clients.[9]

Margarita Blankenheim: Kaspar's wife. Kaspar played with Margarita often as a child, although in the end only saw her as a means to remain rich compared to his other marriage candidates. Disturbed by her Sleepless condition, Kaspar preferred the company of more beautiful women to her and gave no consideration to the girl's feelings. Despite this, he trusted Margarita, letting her with meet his business partner "Elluka" and accepting her birthday gift to him with no suspicion of foul play.

Mayrana Blossom: Kaspar's partner in Père Noël. Understanding her to be First Santa Claus and Elluka Clockworker, Kaspar eagerly worked with her in the underground market to line his own pockets, often polite and cordial when she visited and introducing her to his wife. Despite this, he had no loyalty to "Elluka" or Père Noël and monopolized the black market against her wishes.

Eleanor: One of Kaspar's mistresses. Kaspar often invited Eleanor over to his mansion and enjoyed her company, showering her with many gifts as well as considering her his favorite. As part of this, Kaspar invited Eleanor over on his birthday and even shared his wife's present to him with her.

Kriemhilde: One of Kaspar's many mistresses. Kaspar often invited Kriemhilde over to his mansion and enjoyed her company, showering her with many gifts.

Kaspar Blankenheim's profile from Deadly Sins of Evil: Gift from the Princess who Brought Sleep
Add a photo to this gallery

Kaspar in Gift from the Princess who Brought Sleep 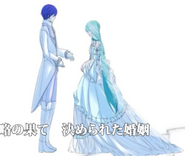 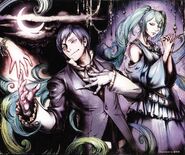 Kaspar as he appears in Deadly Sins of Evil: Gift from the Princess who Brought Sleep
Add a photo to this gallery 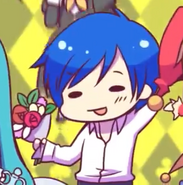 Kaspar as he appears in the Deadly Sins of Evil manga

Kaspar recounted by Margarita in the manga 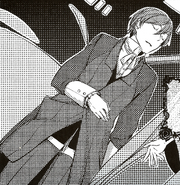 Kaspar as he appears in Quartets of Evil

Kaspar dressed in only his formal vest in the manga

Retrieved from "https://theevilliouschronicles.fandom.com/wiki/Kaspar_Blankenheim?oldid=189095"
Community content is available under CC-BY-SA unless otherwise noted.