For the boy sometimes referred to as "Irregular", see Adam. 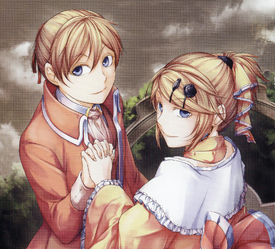 Irregulars[note 1] were a type of human in the Third Period. Existing outside the Third Period's established rules, they were typically capable of both great destruction and as well as creation, and were instrumental in bringing about the Four Endings. Two kinds existed, the Ending Boy[note 2] and the Genesis Girl.[note 3]

Existing outside the established rules of the Third Period, irregulars were beings brought into existence through illogical or even miraculous ways, such as through virgin conception. Irregulars could enact a "reformatting" event known as the Re_birthday, and were thus considered the key to bringing about the Four Endings.[1] They were usually born in sets of boy/girl twins; out of the pair, the male usually represented destruction, called the "ending boy", while the female usually represented creation, called the "genesis girl".[2] Because of this, both were necessary in recreating the world, as one destroyed it and the other created it anew.

Irregulars born without their twin counterpart tended to be highly unstable and destructive in nature regardless of gender, to the point of being able to bring about the end of entire worlds. They were typically born with blond hair.[3] Irregulars were also, in some cases, affected by the distortions caused by Sickle's meddling with parallel worlds.[2]

Retrieved from "https://theevilliouschronicles.fandom.com/wiki/Irregulars?oldid=192102"
Community content is available under CC-BY-SA unless otherwise noted.