Ilotte Venomania was a Duke of the Beelzenian Empire, governing the territory of Asmodean, and the father of Cherubim and Sateriasis. After his first wife committed suicide due to their baby's deformity, the furious feudal lord locked the child away in the basement. He later remarried and sired another son, raising Sateriasis to be his heir instead.

Born during the first century EC as the son of the Venomania Family,[1] as well as childhood friends with Martius Beelzenia,[2] Ilotte eventually became the head of the family and inherited its title as one of the Five Dukes, living at his mansion in Lasaland. While managing the Asmodean region's state of affairs, Ilotte began visiting the nearby village of Abito about once a year to hear the local province's opinion on its current state.[1] At some point, the Duke began writing about his daily life and work in a diary.[3]

Later in life Ilotte met and married the noblewoman Nylpho, conceiving a child with her. Once their baby was born in EC 113, they discovered the boy was deformed with another face on his right cheek. Nylpho committed suicide shortly after and the grieving Duke blamed the baby, concluding he was a "demon child";[4] he decided to imprison the child in the basement with a lone sentry, occasionally visiting the boy's cell to talk with the guard.

Soon after, Ilotte married the younger sister of Marquis Glassred and sired a child with his second wife in EC 115, naming him Sateriasis. He later agreed to betroth his son to the Marquis' daughter, Gumina. Years later, the duke posed for a portrait with his wife and the young Sateriasis, hanging it in the mansion,[3] when the child was old enough took him on one of his his yearly visits to Abito.[1]

When the boy grew older, Sateriasis begged his father to free his deformed half-brother and Ilotte eventually complied, naming his first son "Cherubim" and letting him work at the mansion as a servant.[3] In December of EC 135, Ilotte threw a party at his mansion with his aristocratic associates. The next day, Cherubim murdered the Duke along with the rest of his family and servants.[5]

Shortly after his death, the sorceress I.R. visited the mansion to give the Venom Sword to the Duke and discovered the massacre. Offering the vessel of sin to Cherubim instead,[5] the boy contracted with the Demon of Lust to masquerade as Sateriasis and become the new Duke of Asmodean, brainwashing and abducting numerous women across the Beelzenian Empire until his assassination over a year later.[6]

While investigating clues about his past, the amnesic Cherubim read through the mansion's diaries, including Ilotte's journal.[3] Abito's village chief later claimed Ilotte would've been proud of Duke "Sateriasis" becoming so handsome as an adult, sharing all sorts of stories of the late Duke's yearly visits with the new feudal lord.[1]

Ilotte was a devoted and loving man but a hateful father to Cherubim.[4] As the Duke of Asmodean, he was generally likable, understanding and open to his subject's opinions, earning him praise from those under him.[1] Having loved Nylpho dearly, Ilotte blamed their deformed son for driving her to suicide and quickly grew to despise the baby, considering his deformity demonic in origin, and he disowned and imprisoned the boy as a result.

In spite of his love for Nylpho, Ilotte quickly remarried and sired a new heir for the Venomanias, treating Sateriasis as if he were his only son and lavishing him with everything he needed to succeed him as the heir.[4] The Duke's love and trust in his youngest surpassed his hatred for his eldest, accepting Sateriasis' pleas to let Cherubim be free from the basement and be part of normal society; however, he still refused to treat the servant as part of the family.[3]

Befitting his position among the Five Dukes, Ilotte was an effective manager of his territory and ruled fairly, bringing Asmodean to military and economic prosperity by the time his son succeeded him.[1] He was also educated and thus capable of reading and writing.[3]

Cherubim: Ilotte's first son. Hating the boy as the reason for his first wife's suicide, as well as repulsed by the child's deformity, Ilotte neglected and imprisoned his son shortly after his birth. Aside from occasional visits to the basement to speak with his guard, Ilotte made no sustained interaction with Cherubim. While setting him free at his son and second wife's behest, he similarly refused to acknowledge him as his heir and firstborn, making him a servant instead.

Sateriasis Venomania: Ilotte's younger son. Loving and raising Sateriasis in contrast to his older child, Ilotte often spent time with the boy showing him around the Asmodean territory, preparing him to inherit the dukedom as his heir. His affection for the handsome and popular Sateriasis in part allowed Ilotte to be swayed by him, allowing Cherubim out of the basement at the pleadings of his second son and his mother.

Nylpho: Ilotte's first wife. Marrying her to the blessings of his peers, Ilotte loved Nylpho and conceived a child with her. Due to this love for his wife, Ilotte was distraught by her suicide and came to hate the child that had prompted it, believing her death due to its ugliness.

Second Wife: Ilotte's wife after Nylpho's death. Ilotte loved his wife enough to conceive another child with her, as well as to be swayed by her when she pleaded for him to release Cherubim from the basement. 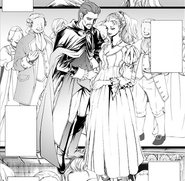 Retrieved from "https://theevilliouschronicles.fandom.com/wiki/Ilotte_Venomania?oldid=185772"
Community content is available under CC-BY-SA unless otherwise noted.