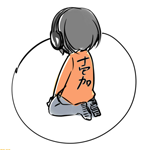 Ichika[note 1] is the primary illustrator for the Evillious Chronicles. Collaborating with Akuno-P early on in his career, Ichika continues to extensively contribute to the series. Included in her contributions are her illustrations for the series' light novels, albums and manga, among other forms of media.

Ichika began as an artist by teaching herself illustration, reading books on the subject and honing her skills without formal lessons.[1] Then, beginning in 2008, Ichika first began posting her own PVs for various songs, one notable one being Cantarella. Around the same time, Akuno-P was searching for illustrations for his song, The Daughter of Evil.[2]

Seeing this as an opportunity, Ichika contacted him and the two collaborated for the first time.[3] While the song was not popular initially, its sequel The Servant of Evil became extremely popular and both creators gained notability within the community. Ichika then kept illustrating PVs for other producers, teaming up with Akuno-P again for Tale of Abandonment on a Moonlit Night, released in October 2008.

Her next major contribution would be Evil Food Eater Conchita, which was another success for both parties. After a string of successes, she illustrated the booklet and cover for Evils Theater. She would not collaborate with Akuno-P again until 2010, in which she contributed several drawings with other artists for The Daughter of White. Her art was commissioned to promote a theater adaption of The Daughter of Evil and its soundtrack, released in March.

In the following months, she also illustrated The Last Revolver and later Twiright Prank, the latter released in August. A week later, the first novel for the The Daughter of Evil Series, Clôture of Yellow was released, which she had provided the major illustrations. She later collaborated with Akuno-P in December for his first commercial album Evils Kingdom by illustrating the album art and booklet. At the end of the year she released Memento, a collection of manga shorts reflecting on her work thus far.

Upon the release of the second novel in The Daughter of Evil series, Ichika began to establish herself as a major illustrator for Akuno-P, providing interior illustrations once again. Her next PV was Gift from the Princess who Brought Sleep, released in May 2011. In July, Akuno-P's third summer album Evils Court was released, complete with Ichika's artwork. A month later, Ichika was interviewed along with the other illustrators for Entr'acte of Evil: The Daughter of Evil Worldguide.[4]

Ichika's next contribution was the video for Escape of Salmhofer the Witch, released at the end of July. Simultaneously, she promoted Akuno-P's upcoming album on her blog, which featured her illustrations in its booklet and cover.[6] An illustration of Riliane Lucifen d'Autriche was also used in a campaign with FamilyMart to tie in with Hatsune Miku's fifth anniversary.

In the following August, Ichika created Her Reason for the upcoming fanbook, which also featured a short comic about her growing collaboration with Akuno-P. Her character profiles from the novel series were later used in The Daughter of Evil Schedule Book 2013. Ichika's final contribution for the year was the character profiles for Akuno-P's new novel series, the first entry detailing The Lunacy of Duke Venomania.

After a long pause between her collaboration with Akuno-P, Ichika returned with illustrations for his Original Sin Story -Act 2- in August.[7] The following month, she took on illustrating Deadly Sins of Evil: Evil Food Eater Conchita, completing both the cover and interior illustrations. A trailer was uploaded before its release, featuring some of her illustrations.

A few months later in November, Ichika's costume designs were used again in Project Mirai 2. The first databook for the Deadly Sins of Evil was published in December, featuring her illustrations of Arte, Pollo, Elluka Clockworker, and Platonic. On New Year's Eve, she released a statement reflecting on her work for 2013, as well as continued success in her future endeavors; also revealing that in November, her grandmother had passed away.[8]

In February 2014, Ichika's biggest project yet was announced: a manga adaption of The Daughter of Evil.[9] Prior to its release, she had participated in a livestream promoting the manga on Nico Nico Douga.[10]

Ichika's next contribution would not come until August, with the release of The Muzzle of Nemesis album. In addition, she also illustrated the PV of the same name.[11] Just a few weeks later, Deadly Sins of Evil: Gift from the Princess who Brought Sleep was released, featuring her illustrations once more. In September, a manga short for the novel was released in MIKU Pack 09.[12]

The following month, Ichika released a second PV, focusing on the exploits of Elluka Clockworker and Gumillia.[13] In addition, the second volume of The Daughter of Evil manga was released in the same month, with her commenting on how the manga had created different perspectives of the story.[14]

In February, Ichika provided illustrations for the PV of Akuno-P's Seven Crimes and Punishments; she also provided art for the album of the same name, as well as its website profiles corresponding short story.[15] She later traveled to Taiwan for autograph sessions, which she remarked being nervous about at first, before eventually relaxing.[16]

The following month, the release of Deadly Sins of Evil: Fifth Pierrot marked Ichika's next novel collaboration, along with a trailer that featured several illustrations from the novel. Nearly a week later, she released her first artbook, Cocoon.[17] The book featured full concepts of her art for Evillious, as well as several original pieces.

For the release of MIKU Pack 13 in May, she created another manga short promoting the current novel entry.[18] At the end of the month, Project Mirai DX was released in Japan, an expansion of the previous two games; the costume designs being used again. Ichika later commented that the next half of the year would be the time for Summer Comic Market and working on The Daughter of Evil: Act 3.[19]

In August, Ichika collaborated for Akuno-P's summer album Original Sin Story: Complete Edition, complete with cover artwork and the booklet. Prior to its release, a crossfade of the album was released, featuring several character designs illustrated by her. In December, Deadly Sins of Evil: The Tailor of Enbizaka was released, featuring the cover, character profiles, and major illustrations by Ichika. The third volume of The Daughter of Evil manga was released on January 27. 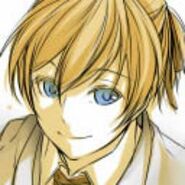 Still of Nemesis Sudou from The Last Revolver PV 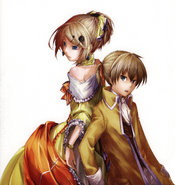 Illustration of Riliane and Allen from the cover of The Daughter of Evil: Clôture of Yellow 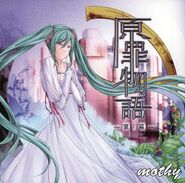 The cover of the Original Sin Story -Act 1- album

Page from the Her Reason manga 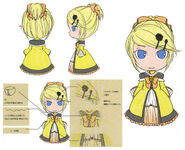 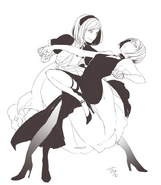 Fanart of Levia and Behemo

The cover of Ichika's artbook Cocoon