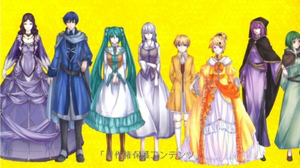 Humans[note 1], also known as earthlings[note 2], were a race of creatures mostly residing in the Third Period. Originating from the Second Period, humanity escaped its destruction and repopulated a new planet, forming various civilizations over the course of history.

Humans originally prospered in the First Period, Earth, becoming technologically advanced enough to generate a digital world known as the Second Period.[1] In the Second Period, online avatars called "earthlings" developed various technological and scientific advancements as well.[2] Later on, the humans of the First Period created a crisis for the earthlings in the form of HER,[1] which became widespread amongst the population, eventually reducing it to one third of its size.

Faced with the eventual destruction of their world, several earthling scientists boarded multiple spaceships, one being the Climb One, to search for habitable planets. As Climb One lost contact with the other spaceships,[2] it was brought into reality by Behemo Barisol; its crew eventually decided to create new earthlings to repopulate the world they had seemingly discovered, really the destroyed First Period.[1] They later, however, changed their plan to creating a new species of human entirely.[2]

Over time, the earthlings of Climb One developed a new race of humans by BT 528, specifically under the direction of Levia and Behemo Barisol. At some point during the process, Seth Twiright contaminated the new human race with the ability to develop HER. These new humans then began populating the Third Period's continents, namely Bolganio and Maistia.

Humans eventually developed farming, writing and magic use. After an ensuing quarrel and Climb One's crash left the surviving earthlings' spirit data trapped inside,[2] the Third Period's humans excavated and congregated around the spaceship, founding the Levin religion and building the powerful Magic Kingdom Levianta around the Climb One.[3]

Humanity continued to construct numerous civilizations that developed into large sovereign powers, one of the most prominent being the Tasan Empire. Around five centuries after their creation, the Evillious Calendar was established by the Magic Kingdom's queen, Alice Merry-Go-Round.[4] Due to the influence of Seth Twiright, HER continued to spread throughout the population.

In EC 013, the Magic Kingdom was destroyed in the Levianta Catastrophe.[5] Sometime after, the Tasan Empire collapsed as well, eventually being swallowed by the quickly growing Beelzenian Empire.[6]

In EC 325, civil conflict erupted in Beelzenia due to the apostasy of Duke Banica Conchita.[9] Asmodean then entered a war with Beelzenia. After the prolonged conflict, both countries were left in tatters by EC 399.[10] That same year, Beelzenia's Lucifenia territory declared independence from the empire.[8] During the EC 470s, Lucifenia began warring with both Asmodean and Beelzenia, becoming the new dominant power in Evillious by EC 490 as a result.[11]

During that period, the Beelzenian population was ravaged by Gula.[12] In EC 499, Lucifenia's populace suffered from a famine under the reign of Princess Riliane Lucifen d'Autriche.[11] Later that year, the monarch ordered an attack on the Kingdom of Elphegort.[13] As a result of the following Lucifenian Revolution, the kingdom was colonized by the Kingdom of Marlon.[14] Adopting a policy of imperialism, Marlon invaded both Beelzenia and Asmodean through Lucifenia in EC 505 before the war abruptly ended.[15]

In EC 508, Holy Levianta suffered terrorist attacks enacted by Neo Apocalypse. Two years later, Marlon granted Lucifenia its sovereignty, with the former kingdom reorganizing itself into a republic.[16] In EC 573, the nations of Evillious agreed to the establishment of the World Police.[17] Decades later in EC 592, the continent of Maistia was discovered and subsequently colonized by the Freezis Foundation for trade.[18]

In EC 609, the population of Toragay was decimated by Margarita Blankenheim, causing international tensions to rise.[17] Immediately afterward, a string of murders in Rolled perpetrated by Lemy Abelard raised similar fears across the different nations. In EC 776, Maistia declared independence, becoming known as the United States of Maistia.[19]

In EC 842, the tailor Kayo Sudou caused an incident that greatly affected society.[20] In EC 878, the nations of Lucifenia, Elphegort, Marlon and Levianta signed the Aishikeru Treaty in an effort of solidarity, coming together to form the Union State of Evillious.[8] A century later, corruption seeped into its justice system, reaching its high point in the Dark Star Scandal caused by Gallerian Marlon and eventually leading to the Leviantan Civil War in EC 983.[8]

In EC 993,[19] Elphegort invaded Lucifenia and all of Evillious was pulled into a worldwide war.[21] In EC 999, Elphegort launched its weapon, Punishment, all over the world, destroying all life in the Third Period and causing it to merge with the Hellish Yard.[3]

Existing in the digital reality of the Second Period, earthlings were presumably similar to their real-life counterparts in terms of appearance and biology, having been modeled off of existing people in terms of both looks and personality.[1] Comprised of a body and soul, earthlings had an intellect much more advanced than the people of the First Period. This allowed them to produce extremely advanced scientific innovations, allowing them create artificial life, discover parallel worlds, and even achieve reincarnation. Despite this apparent intellect, there were also cases of extreme abnormality in terms of mental behavior. Compounding this, earthlings also had the capacity to develop HER, whether through genetics or other factors.[2]

Humans in the Third Period were designed to be identical to earthlings in terms of their shape, cognitive skills and biology. As part of this, many traits of humans also had a tendency to carry on through many generations,[22] if not influenced by an outside source such as magic.[23] Some genetics were so strong that they led to individuals who were nearly identical to their ancestors, even ones centuries removed.[24] When the rules of the world broke down, human genetics became illogical and led to parents conceiving children who looked nothing like them, or didn't look human at all.[25]

Similarly, humans could be born with magical potential, making them suited to learning and casting magic techniques, and magic potential was also an inherited trait. Some humans also had the possibility of developing HER, with the potential to develop it influenced by a variety of factors and its effects weakening with each subsequent generation.[26]

Retrieved from "https://theevilliouschronicles.fandom.com/wiki/Humans?oldid=190870"
Community content is available under CC-BY-SA unless otherwise noted.