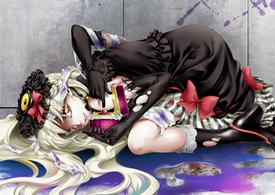 Hereditary Evil Raiser Syndrome[note 1], also known as Hereditary Evil Raiser[note 2], or simply HER,[note 3] was a rare genetic condition. Resulting from Malice, those who were infected by the syndrome possessed malicious intent and a destructive personality. After extensive experimentation by Seth Twiright, the condition became a lasting presence in the Third Period.

At some point, the humans of the First Period created the Malice gene in the Second Period to introduce a crisis for the earthlings.[1] As a result of the gene, Hereditary Evil Raiser Syndrome spread among the earthlings of the Second Period and the mass outbreak of Hereditary Evil Raisers led to the world's destruction. With a HER, Seth Twiright, among the surviving 72 earthlings on the Climb One, the new human species created for the new world was contaminated and thus had a chance of developing the condition. At least two of the earthlings on the Climb One, Levia Barisol and Lich Arklow, were also contaminated and developed the syndrome. Meanwhile, Seth escaped retribution for his deeds and incarnated into a human body in the new world.[2]

Starting around the BT 020s, Seth Twiright developed ghoul children to increase the number of HERs, creating clones such as Pale Noël. Once he developed another method via seeds of malice, Seth created numerous new ghoul children over the years, causing a surge in HERs rampaging throughout the Magic Kingdom Levianta.[3] As the HERs were identified, the Leviantan government attempted to root out the evil raisers and were largely unsuccessful.[4]

Seth later took over the second Project 'Ma' established to eliminate HERs and prevent Levianta's prophesied destruction.[5] The scientist then implanted the ghoul child test subject, Meta Salmhofer, with the god seed, creating the human vessels for the twin gods,[3] Hänsel and Gretel on December 27, EC 0.[6] They later escaped from the royal institute and Seth continued experimenting in following projects. At some point, Seth began developing several objects for the purpose of becoming vessels of malice.

When the Levianta Catastrophe occurred in EC 013, virtually all HERs were wiped out in the explosion and resulting destruction caused by Levia and Behemo's dragon body; at that time, the deceased HERs' seeds of malice were released into the air, causing an extremely low chance for any human to develop the syndrome.[3] After the twin-headed dragon's body fell apart and descended into Held's Forest, its fragments fused with Hänsel and Gretel.[7] Around the same time, Seth transferred Irina Clockworker's soul from her mortally injured body into a stuffed red cat before dying himself.[4]

In EC 014, Hänsel and Gretel murdered their foster parents, Eve and Adam Moonlit, and split Eve's Original Sin into seven fragments. Using Seth and his fellow god kin as the demons along with Eve's soul, the twins created seven vessels of sin before releasing the vessels into the world.[7] Irina then began collecting them to spread malice. In December of EC 135, Irina gave the Lust sword vessel to Cherubim and allowed "Duke Sateriasis Venomania" to contract with the Demon of Lust and propagate to increase the number of HERs.[4]

The Duke successfully impregnated Maylis Beelzenia, Mikulia Greeonio, and Lukana Octo with children that could develop Hereditary Evil Raiser Syndrome.[8] Mikulia's bloodline was later ended with the death of her son in EC 150.[9] Hänsel and Gretel later reincarnated as Arte and Pollo around the EC 290s, becoming the loyal servants to Duke Banica Conchita, introducing the noble to the Demon of Gluttony and killing for her. They were later devoured by Banica around August of EC 325.[10]

On January 14, EC 457, Prim Rogzé was born as a HER.[11] The Queen later gave birth to another reincarnation of Gretel, Ney Marlon, on November 1, EC 482. Afterward, Prim collaborated with Irina to destroy the Kingdom of Lucifenia while allowing the mage to experiment on Ney and use her as Marlon's spy and assassin. Prim was later killed by Ney in EC 505; following Ney's death soon after, Gretel's soul was absorbed into the Glass of Conchita and returned to the new demon Banica's service.[12]

On December 27, EC 595, Hänsel reincarnated as Lemy Abelard. Later adopted by Irina posing as "Julia Abelard", the boy became her assassin for the criminal organization Père Noël. After Lemy's final death on January 30, EC 611, Hänsel's soul was absorbed into the Glass of Conchita and returned to Banica's service.[3] Following Irina's clash with Banica and Levia, her soul was fused with Levia's and Eve Moonlit's spirits, becoming the entity of Ma. The new HER then continued collecting the vessels.[13]

A Hereditary Evil Raiser, or HER, is said to be at their core an incarnation of malice, "programmed" to destroy the gods, everything they created and everything related to them;[14] therefore, a HER's tendencies included physical violence, human experimentation, destruction, and deceit. As a natural prerequisite, HERs typically attempted to increase their own kind and ensure the continuation of their "mission" to spread malice by any means necessary. They likewise took immense pleasure in performing their actions,[4] though in behavior they could range from high-functioning individuals to unstable and irrational killers.[15]

HERs could also be unaware of their condition and live their lives under the assumption that they were normal.[4] Similarly, despite their predisposition toward malice, a HER could still feel guilt over their darker tendencies. As a result, HERs varied in terms of personality, with some attempting to resist their symptoms.[16] In a similar vein, a Hereditary Evil Raiser could hide their symptoms to deceive their peers.[17] One case of HERS was co-morbid with the patient having Dissociative Identity Disorder, with a second personality displaying the HER symptoms instead of the original.[18] Similarly, a symptom of HER was sometimes auditory hallucinations, with a separate voice urging the afflicted to do malicious acts.[19]

Originating from Malice, all Hereditary Evil Raisers were created from the same source.[14] A human HER could also be developed by cloning the human's body, thereby copying their entire genetic and mental makeup. A HER could also be born by implanting the zygote with seeds of malice, causing them to naturally develop the genes of malice as the fetus grew and matured; HERs could therefore be artificially engineered en masse as with ghoul children.[3] Additionally, a human HER could be created through a human forging a contract with a Demon of Sin.[8]

Despite this extremely low probability, the offspring of one or more parents with HER exponentially increased the chances the child would inherit the gene and thereby the syndrome.[4] As a result, family bloodlines could carry over the gene via seeds of malice throughout generations, though the chances of any given descendant developing the syndrome decreased as the family's blood thinned out over the generations.[11] Despite this, near the end of the Third Period it was possible, although extremely rare, for an individual to contract HER Syndrome after birth.[15]

Originally, those who developed Hereditary Evil Syndrome had no known cure for their condition. In order to suppress the symptoms, adam and marry-go-round drugs could be administered and, in more serious cases, clockwork medicine was given. Despite this, those affected could refuse taking the medication, making it difficult to properly treat them.[18] The priestesses of Lighwatch City in the Magic Kingdom Levianta could detect HER, with Elluka Chirclatia in particular being able to cure it.[14] Some HERs were also known to suppress their condition with memory loss or willpower.[20]