The Held Monastery[note 1] was a convent dedicated to the Held sect, located near a Lucifenian port town and funded by the Freezis Firm. The monastery upheld the faith of the religious community there, becoming a safe haven for many over the years as both a church, an orphanage, and a lodging place for travelers.

During the mid to late EC 490s,[1] a friar of the Held sect established the monastery in a Lucifenian port town using the donations of the merchant Keel Freezis, acting as the director. The Golden Key that a pilgrim, Yvette, carried was soon after sealed in the convent. Afterward, Yvette was baptized as a nun at the monastery.[2] At some point, the monastery began accepting travellers unable to find an inn in their journey, in exchange for a donation to the church.[3] It also began taking in orphans.

Eventually, Yvette became the Mother Superior following the friar's death.[2] Following the Green Hunting in EC 500, a Netsuma, Clarith, came to work at the convent per Keel Freezis' recommendation; she was later visited by Elluka Clockworker and Gumillia early the following year.[4] Soon after, Clarith rescued a young girl named Rin and brought her to the convent to live. Over time, the immature Rin began helping out at the convent.[5] At some point, Clarith was officially baptized as a nun in the church.[6]

In EC 505, Mikina Freezis began repeatedly visiting the monastery,[7] donating several of her daughter Yukina's books to Clarith.[3] At a later date, Yukina visited the monastery, accompanied by Germaine Avadonia, and stayed at the monastery while searching for her mother for two days.[3] Mikina was then spotted on the beach outside the monastery and she was subdued by Rin, Germaine, and Yukina that night.[8]

Years later, Rin was baptized as a nun in the church,[9] eventually succeeding Yvette as the monastery's abbess after the latter's death in EC 529.[2] Later on, Clarith took in an orphaned Netsuma before leaving the monastery to form her own religious order.[10] Meanwhile, Rin continued to care for the children in the orphanage until her death in EC 562.[9]

In EC 999, the Held Monastery was completely decimated by Punishment. Following the end of the Third Period, the destruction site merged with the Hellish Yard along with the rest of the ground world.[11]

The Levin church where prayers were conducted within the monastery. The church was outfitted with bells and served as a gathering place for the faithful. Due to the Held sect's restrictions on idolatry, the building was sparsely decorated.[4]

A place inside the church where sinners were allowed to "confess" their sins to God in privacy. Those confessing would kneel inside the room and speak their sins aloud in order to obtain forgiveness.[5]

A place within the monastery for children that had been orphaned, abandoned, or had run away from their homes.[4]

A place within the monastery for workers or nuns that had been baptized into the church. The building had several simple rooms for travelers to rest, set in with lavish bedspreads, and a cafeteria for making meals.[3] Workers would reside in their own quarters when not working.[4]

Grounds of the monastery that had been domesticated for farming purposes. All able members of the monastery, child or adult, were expected to help in the farm work.[5] The fields were used to grow crops for wine-making as well as food for the residents.[4]

A building in the monastery made for storing farm equipment.[3] 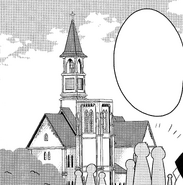 Retrieved from "https://theevilliouschronicles.fandom.com/wiki/Held_Monastery?oldid=186154"
Community content is available under CC-BY-SA unless otherwise noted.