"It is thanks to my father that these ridiculous ‘witch hunts’ began—Ah, let me say up front that I don’t intend to debate or apologize on the matter with you. What my father did has nothing to do with me. I’m not even a historian myself."
―Hel[src]

Hel Jaakko, codenamed No. 2, was a clerk for the USE Dark Star Bureau and a member of PN. Originally working for the Freezis Conglomerate, Hel eventually became disillusioned with her employers and joined PN. After the group successfully indicted Loki Freezis, she began serving the Dark Star Bureau, working under Director Gallerian Marlon.

Born the daughter of Heaven Jaakko sometime during the late 10th century EC, Hel grew up a member of the Jaakko family, eventually becoming employed as a clerk for the Freezis Conglomerate. After her fellow employee, Bruno Zero, formed an organization to undermine Loki Freezis, Hel joined the group, having witnessed the atrocities committed by the Freezis Family.[1] She then dubbed the group "Père Noël" after the criminal organization of the same name.[2] Later on, she became acquainted with her comrades Shiro Netsuma and Feng Li.[3] At some point, she married and birthed a child.[2]

In EC 960, Hel was called to Lunaca Labora by Bruno, learning that Loki had tried to kill his fellow judge Gallerian Marlon under the pretense of going on a hunting trip. Entering the laboratory with Feng, Hel saw Shiro with Gallerian, explaining how Shiro was timid without a gun after hearing Gallerian's exasperation with her. Hel then explained to the judge that he had been treated using the laboratory's technology from Magic Kingdom Levianta, before further clarifying, when asked, that Shiro had shot him in order to save him, not Loki.

After the shocked Gallerian met briefly with Feng, Hel on his request continued her explanation on what Lunaca Labora was and tried to relate what Ma had said about the laboratory, only for Bruno to interrupt and talk with Gallerian himself. Hel later had their fellow member Postman retrieve Ma, who recruited Gallerian into the organization.[3] The following year, Hel delivered the Yarera family's bribe to Dark Star Bureau Director Hanma Baldured, helping to persuade him to try Loki Freezis guilty of his crimes.[1]

Later on, Hel was hired as a clerk for the Dark Star Bureau;[4] around that time, Shiro also hired her as her deputy in order to compensate for her lack of communication skills.[5] In EC 976, Hel divorced her husband and began raising her child on her own. After Gallerian established Police Neutrality as the bureau's police force, Hel joined the force. Two years later, Hel and the other members of PN met with Bruno at Gallerian's mansion to discuss privately investigating the Titanis Sinking Incident. Although initially refusing in light of the harm it could do to her position, she was eventually persuaded by Bruno and the other members.

She then carried out an investigation and learned about the Zeus gang trying to partition Aceid's slums, who were related to the incident. Two months after their initial meeting, Hel reconvened with the others at a bar in Yatski and shared what she had learned, while listening to the others give their own information. Later on, the group determined that Loki's brother Bindi had orchestrated the incident with Zeus.[2]

During Bindi's trial, Hel was shocked and upset to find that Gallerian had tried Bindi innocent for the incident. Later, during the case of Medea Col's murder, PN's investigation determined an entirely different murderer and murder weapon than the World Police's investigation. Upset by the inconsistency, Hel met with Feng in the conference room two weeks after the investigation and expressed her doubts about what they were doing.

After Feng reassured her, the two went to chatting and Hel furthermore vented about how upset she was at Gallerian's corrupt behavior. Feng pointed out the bribe they'd made to get Loki convicted; when Hel asserted that had been for a good cause, she was mollified for the moment when Feng posited that Gallerian's actions were also for a good, albeit unknown cause, and that he would kill him if they weren't. The two soon departed to put the evidence from their investigation in the safe.[6]

Witnessing Gallerian's corruption over the years, Hel eventually leaked information on his deeds to the Tasan Party. After the outbreak of the Leviantan Civil War in EC 983, and particularly after Tony Ausdin murdered Shiro, Hel went with Bruno and Feng to see Gallerian in his office. She announced she was quitting both PN and the Dark Star Courthouse, fed up with his corruption and refusing to believe Shiro's murder was an accident. After Bruno shared how the Tasan Party had leaked information regarding his corruption, Gallerian concluded Hel was the culprit and ordered Feng to arrest her, only for Feng to announce he was quitting for similar reasons. The two departed soon after.[7]

After leaving PN, Hel lived a quiet life with her family.[8] Over a decade after leaving, Hel reunited with the members of PN as they prepared a mission to take down the Elphegortean dictator, Nemesis Sudou. She accompanied Feng Li, Bruno, and over ten other soldiers as they made an assault on the headquarters of the Tasan Party; while Feng hid in a cart, Hel approached the building with him on the pretext of making a food delivery.

When the guards began to question her and tried to send her away, Hel unleashed Feng on them all; as their soldiers began attacking to divert attention away from Bruno's infiltration team, Hel escaped. Due to Nemesis' special abilities, the attack failed.[9]

When Hel died, her spirit transformed back into her youthful self in accordance with her ideal appearance. After Nemesis Sudou destroyed the Third Period in EC 999, Hel met with her father for the first time in decades and he told her his theory that everyone on the ground world was a spirit, with the weapon Punishment having destroyed the boundary between heaven and the Hellish Yard and flooded the ground world with souls.

While exploring the ground world with Heaven, Hel spotted Nemesis alongside a blond boy whom her father identified as Allen Avadonia, a historical figure who lived centuries earlier. Hel also journeyed to the ruined site of Lucifenia, spotting the historical figures Riliane Lucifen d'Autriche and her mortal enemy Germaine Avadonia partying together. She also journeyed to the site of Evil's Theater and spotted a former head of the Tasan Party, Gammon Octo, addressing several former Tasan soldiers who were amassing before the floating building.

Afterwards, Hel ran into her former comrade Feng Li, who had also obtained his ideal appearance in looking like a handsome young man. Hel explained to Feng all that had occurred and how there was unrest going on among the spirits. When she expressed her intent to return to Evil's Theater to investigate the situation, Feng offered to come with her and the two decided to head out together, only to encounter a Black Box before they could.[10] After being sucked up into the Black Box, Hel and Feng were freed and regrouped with the rest of the former members of PN. Later, they were among the souls singing the Clockwork Lullaby to stop Ma.[11]

"She has seen much of the Freezis’ dirty laundry with her own eyes. She has a very strong sense of justice. And that in itself is why she was unable to bear being involved so considerably in their work."
―Ma regarding Hel[src]

Hel was a just and conscientious woman. Strongly believing in the ideal of justice, Hel did things out of her own sense of right and wrong and was willing to break the law only if it was justified in her eyes.[6] She similarly strove to be a morally upright person, wanting to be a good example towards her daughter and growing intolerant of Gallerian's blatant corruption. Hel was also loyal to her comrades, especially Shiro.[7] Aside from this, she was open with her emotions, readily expressing her feelings whenever she was upset or worried about something.[6]

A proficient clerk, Hel excelled at paperwork and other clerical jobs. Because of this, she was eligible enough to be hired by both the Freezis Conglomerate and the Dark Star Bureau. Hel was also a talented investigator, able to look behind the scenes and obtain clues.[2] Aside from this, Hel was a capable homemaker and good with domestic skills such as raising a child. Despite her skill with detective and police work, Hel lacked any combat skills.[6]

Feng Li: One of Hel's colleagues in PN. Hel and Feng were good friends over the course of their time together in the secret organization, and even later when they had obtained legitimate jobs. Willing to support each other through thick and thin, Hel and Feng worked together to the end and ended up accompanying each other after the World's end.

Shiro Netsuma: One of Hel's colleagues in PN. Hel and Shiro were on good terms, and Hel often ended up helping Shiro whenever her poor communication skills caused her problems. Shiro's murder by Tony Ausdin was one of the catalysts that led to Hel quitting from Gallerian's employ.

Bruno Zero: One of Hel's employers in PN. Hel and Bruno were on good terms over the course of their work in the secret organization, and later when they had all obtained legitimate jobs. She evidently bore him no ill will for supporting the corrupt Gallerian, and later did not blame him for failing to stop Nemesis' destruction of the world.

Gallerian Marlon: One of Hel's employers for PN. Initially respecting Gallerian for the damage he did to the Freezis Family, Hel became increasingly upset and doubtful over his corrupt court tactics. Seeing them as unjust, Hel eventually got fed up enough to leave Gallerian's employ, although having no desire to take revenge on him after the world's end.

Heaven Jaakko: Hel's father. As family, Hel was intimately familiar with her father and his work, although he had died when she was young. She also tried to keep a neutral opinion on him in regards to how his research began the witch trials in Levianta.

Nemesis Sudou: A woman Hel sought to oppose. Although initially enemies with Nemesis in life, Hel ended up having no enmity towards her by the world's end, convinced that if she hadn't destroyed the world someone else would have, and that vengeance on her was pointless by then. 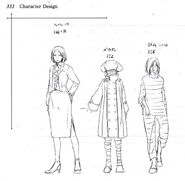 Concept art of Hel in Deadly Sins of Evil: Judgment of Corruption
Add a photo to this gallery

Hel as she appears in Deadly Sins of Evil: Judgment of Corruption
Add a photo to this gallery

Retrieved from "https://theevilliouschronicles.fandom.com/wiki/Hel_Jaakko?oldid=192650"
Community content is available under CC-BY-SA unless otherwise noted.