The Evillious Chronicles Wiki
Register
Don't have an account?
Sign In
Advertisement
in: Magic, Items, Magic Tools,
and 13 more
English 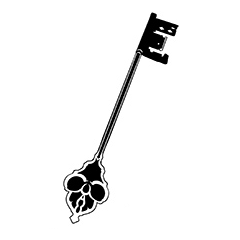 Grim the End[note 1] was one of the Vessels of Sin, inhabited by the Demon of Wrath. Nemesis Sudou was among its most prominent owners, taking part in the Leviantan Civil War.

Sometime during the BT era, Seth Twiright created an unknown number of magical tools to serve as vessels,[1] one of them being his final creation, which he dubbed "Grim the End".[2] When Hänsel and Gretel created the Vessels of Sin in EC 014,[3] Grim the End was used as the vessel for Seth. Afterward, the twins released the vessels into the world.[4] At some point, the spirit of Adam Moonlit also began occupying the vessel and the parasite began borrowing its powers to make contracts.[5]

At some point, the vessel ended up in hands of the Marlon Royal Family, later given to Princess Yufina Marlon by her mother. In March of EC 136, Yufina gave the key to Karchess Crim while she attended her husband's homecoming.[6] Becoming aware of its powers, Karchess brought the vessel with him to Asmodean.[7] Later that year, Grim the End transformed into a knife and was used by Karchess to fatally stab Duke Sateriasis Venomania, possessed by the Demon of Lust.[8] After staging a coup and establishing a "legitimate" Marlon government, Karchess kept the vessel in the Marlon Royal Family and it passed through the generations.[9]

Around the turn of the 4th century EC, the royal family discovered the magical capabilities of the key when combined with other ingredients. Using shavings produced by sharpening the vessel, Prince Carlos Marlon learned how to make a healing elixir from a shaman living in Held's Forest, regularly ingesting the concoction over the years to maintain its effects and infusing his body with the magic.[10]

In EC 325, the prince used the golden powder to poison two bowls of soup, serving them for himself and his beloved, Banica Conchita. Carlos then died shortly after ingesting the concoction while Banica survived and the Demon of Gluttony was slightly weakened.[11] The next day, Banica devoured Carlos' golden dust-infused body, severely weakening the Demon of Gluttony even further.[12]

In the 5th century EC, an Asmodean soldier came into possession of Grim the End and later died during a war in EC 468. The vessel was then kept as a keepsake by his daughter, Yvette Jacobi, and she often played with it. In EC 477, the key transformed into a golden knife for the enraged Yvette and she murdered her stepfather with the weapon. Afterward, she fled with the key before sealing it away in the newly created Held Monastery in the Kingdom of Lucifenia.[13]

At some point, the vessel escaped and ended up in cupboard in one of the rooms at the monastery. In EC 505, the Demon of Wrath possessed Clarith and the vessel took the form of a knife before being taken from the cupboard of the nun's room by her. As Clarith attempted to murder Rin from behind, Allen Avadonia intervened and the demon left Clarith and returned to its vessel. Afterward, Clarith used the knife to cut Rin's hair short.[14]

Sometime after, Grim the End fell into the possession of the Blankenheim Family. In the latter half of EC 608, Marquis Kaspar Blankenheim gave the vessel to Mayrana Blossom in exchange for membership in the criminal organization Père Noël. It was passed onto Julia Abelard shortly after and the mage stored it in her mansion's treasury in Rolled. In December of that year, Julia gave the vessel of Lieutenant General Gatt Coulomb for his assassination of Yuzette Ora and the soldier transformed it into a dagger, strapping it to his belt; following his failure to complete the mission, Gatt returned the vessel to Julia.[15]

On October 6, Gretel moved Grim the End from Julia's treasury into the pocket of Lemy Abelard. After he infiltrated the Corpa Mansion, Lemy inserted the key into a door and it shapeshifted to match the lock, unlocking the room. Two days later, the boy returned the key to his mother Julia. On January 26, EC 611, Julia took the vessel while fleeing her mansion and stored it in Pale Noël's tomb at Merrigod Plateau. On January 29, Gatt took the vessel and transformed it into a longsword before waiting on the outskirts of Calgaround to ambush Elluka Clockworker and Gumillia.

Once the mages' carriage passed, Gatt fired a blast of energy to behead the horse and crash the vehicle. Following the lieutenant general's swift defeat, Grim the End returned to its key form and Elluka retrieved it, giving it to Gumillia. During the Duel of Merrigod Plateau the next day, Gumillia forged a temporary contract with Seth and the key transformed into a bullet, loading it into her Fireworks Gun before shooting and killing Lemy, possessed by the Demon of Gluttony, Banica Conchita.

After Irina Clockworker self-destructed her true body while activating Black Box Type S, the key was abandoned before the clash between Levia Barisol, Irina, and Banica leaked out through the dimensional hole the latter opened, blasting Seth and Adam out of Grim the End. Later that day, it was found by the World Police and stored in their vault.[16]

In EC 842, the vessel arrived in Enbizaka, Jakoku on a merchant ship. It was later obtained by Behemo Barisol and given to Kokutan-douji; the boy then transformed it into a sword and used the vessel to execute Kayo Sudou.[17] Following the execution, the key malfunctioned from its misuse without an occupying demon and went haywire, flying off elsewhere.[18] It was again acquired by Seth Twiright, who inhabited the key again when Gumillia sent him back to the ground world to watch over Nemesis Sudou.[19]

To watch over the young Nemesis, Seth Twiright transformed the key into a Ziz Tiama so that he could freely move about. Once Nemesis adopted him as her pet "Ziz-san", Seth possessed her as the Demon of Wrath and accompanied her everywhere under the guise of being a normal ziz tiama. After Nemesis was forced to kill her lover in December of EC 982 and tried to kill herself, Seth transformed the golden key into a human being so he could speak with her directly, utilizing its transformation ability several times during the conversation.

Convincing Nemesis not to kill herself, Seth transformed Grim the End into six golden bullets and reverted to his own mask form. Urged to use the bullets to shoot the people she considered the most evil,[20] Nemesis would go on to kill her father Gallerian Marlon in EC 983,[21] her mentor Nikolay Tolle in EC 989,[22] her former employer Bruno Zero in EC 993,[23] and her mother Ma in EC 999, using the bullets.[24]

After the destruction of the Third Period in EC 999, Michaela summoned all seven vessels together for Allen Avadonia, including the Golden Key.[25] In EC 1000, Nemesis fired one of the golden bullets at Black Box Type X.[26] Later, Allen used Grim the End to attack Ma.[27]

Similar to the other vessels of sin, Grim the End served as a container for the Demon of Wrath's essence and allowed him to possess or influence a host, though much of contracts carried out were done by Adam.[14] From the key, the demon was able to influence its owner's anger and rage, often putting them in a vicious frenzy.[13] As the Demon of Wrath was the source of Grim the End's magic, sealing the vessel subsequently suppressed the demon.[28]

Grim the End had the ability to shift into multiple shapes,[13] including various weapons, bullets, and even living animals, although the key nonetheless had no will of its own.[20] Its ability could be used even without the Demon of Wrath being present inside the vessel, although the key was at risk of malfunctioning without it.[17] Similarly, the key's metal could be shaved infinitely to create a fine powder that still retained the demon's power. The vessel's wrath magic made it extremely poisonous and venomous when ingested or stabbed into organs.[12] The powder could also be combined with other substances with various effects, creating an amazing healing elixir when combined with the ink of a ziz tiama.[11]

As a weapon, Grim the End could hurl a blast of energy at a target, able to cleanly cut through bone and flesh with ease from a sizable distance.[29] It also had an "anti-demonic" magic that weakened or even killed the Demons of Sin, as well as weakening any other soul inhabiting a vessel of sin;[30] aside from this, Grim the End could be used to restore an individual's sealed memories.[17] Like all the vessels of sin, Grim the End was able to kill a demon contractor through the Demon of Wrath's power;[31] because of its shapeshifting ability, the key was technically considered a contractor under the sun god's rules, making it possible for a Wrath contractor to additionally kill themselves with the key.[20]

Clarith with the vessel of Wrath in The Daughter of White

Karchess with the Golden Knife in The Lunacy of Duke Venomania 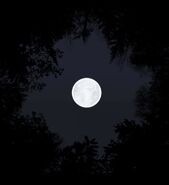 The vessel of Wrath as depicted in Chrono Story 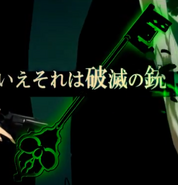 The Key as it appears in Seven Crimes and Punishments 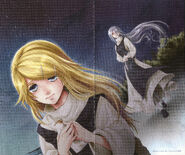 The golden knife as it appears in The Daughter of Evil: Wiegenlied of Green

The golden knife as seen in Deadly Sins of Evil: The Lunacy of Duke Venomania

Karchess holding the golden knife in the novel

The golden longsword in Deadly Sins of Evil: Fifth Pierrot

The golden bullet in the light novel

The golden key in the short story

The golden katana in Deadly Sins of Evil: The Tailor of Enbizaka

A golden bullet on the cover of Deadly Sins of Evil: The Muzzle of Nemesis

Grim the End in The Lunacy of Duke Venomania manga

The Key as seen in The Daughter of Evil manga

Grim the End in the Seven Crimes and Punishments album booklet 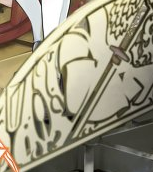 A golden bullet on the cover of the Clockwork Lullaby album

A golden bullet on the complementary post card for the album