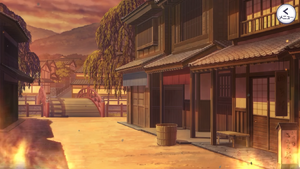 The Great Fire of Enbizaka[note 1] was the name given to the large fire that ravaged part of Enbizaka, Jakoku. Causing a large amount of destruction, the fire consumed several of the town's buildings and killed more than several hundred of its residents.

In EC 580, Enbizaka became the only place in Jakoku open to trade, with, several foreign businesses setting up branches in the town as a result.[1] In EC 838, Kai Miroku, belonging to the anti-foreigner group the Crimson Robed Masses,[2] attempted to set fire to the Freezis Foundation's trade house but was called out by Gakuga Sudou. Startled, the man instead accidentally set fire to a bush and fled.[3]

Soon after, the fire quickly spread to the adjacent buildings down the hill. As the fire worsened, many of Enbizaka's residents crossed the river to safety. However, as more and more people attempted to pass Twin Mirror Bridge, the pedestrian traffic worsened and blocked several evacuees on the side of the river, trapping them inside the fire's reach. Meanwhile, Kai fled the scene of the crime and was pursued by Gakuga in the form of a winged monster.

When they reached Mount Inasa, Kai successfully returned home and Gakuga, burned and exhausted, collapsed on the mountain and lost his memories.[3] The fire eventually went out, after destroying several buildings including Kayo Sudou's tailor shop and Yuka Musubi's hairpin shop.[4]

By the time the fire had gone out, a large part of Enbizaka was burned down and several hundred people were killed, including Kayo's infant son, Ren. During the aftermath, Enbizaka's doctor searched the town for survivors and treated them at his clinic, with Kayo among those treated.[4] Despite the magistrate's office investigating the incident, they were unable to determine the culprit, although investigators tracked the source of the fire to the Freezis trading house and suspected it was a crime against foreigners in Enbizaka.[2]

Later on, both the Freezis Foundation and the Yarera-Zusco Firm invested in the Enbizaka's reconstruction; the town was rebuilt by EC 842.[5] Having lost her entire family, the mental scars Kayo sustained in the fire would eventually lead to her committing a series of murders four years later.[6]

The fire was widely regarded as a tragedy by the citizens of Enbizaka, having destroyed their homes and killed their loved ones. After several foreign firms invested in the town's reconstruction, the locals were quite grateful for the firms' efforts.[5] Despite suspicions that anti-foreign sentiment was behind the fire, Kai's involvement in it was a secret known only to a few people and was never officially recognized;[2] the reputation of the magistrate's office was damaged as a result of never finding a culprit for the crime.[5]