"In sleep, everyone forgets life's troubles and suffering. In unpleasant reality, their wishes can't come true. If everyone is in a dream, they can. So I made it for them. Gift."
―Margarita Blankenheim[src] 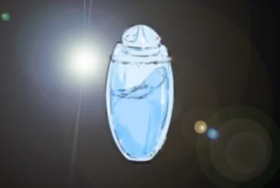 Gift[note 1] was a poison originating from the Kingdom of Elphegort. Originally created as a sleeping agent, the deadly drug was later refined into an extremely lethal poison. It was utilized by several prominent individuals in Evillious history, including Queen Prim Marlon and Marchioness Margarita Blankenheim.

Gift was first invented by the shamans of Elphegort, using the root of the greeonian plateau roses native to Merrigod Plateau to create an effective sleeping elixir. Due to the potency of the drug, it was discovered that Gift instead caused death in anyone who overdosed on the medicine. Due to the difficulty in providing the correct dosage, it was deemed to be more of a dangerous poison. Around EC 151, Countess Mikulia Calgaround learned how to make the drug from Calgaround's roses and used it to poison her husband.[1]

"Well, the Rogzé family is a family that specializes in pharmaceuticals, so someone from our family would be able to acquire the new Gift poison served to Arth. Come to think of it, when I last met Arth, I might have put something in his wine glass. But I wouldn't leave any evidence to begin with so I have forgotten such things from so long ago."
―Prim recounting her first use of Gift[src]

During the early EC 470s, the noble Plus Rogzé refined the medicine's formula and enhanced it. After its completion, he shared the formula with his children, Prim and Presi. Shortly afterward, Prim used the enhanced Gift to poison King Arth's wine glass during her next meeting with the monarch. Arth drank the toxin but managed to survive its effects.[2]

After becoming Queen of Marlon, Prim later sent her creation to her son's imprisoned art tutor, Margaret, via a guard with instructions to take the poison in EC 489; Margaret abided the Queen's demands and committed suicide with the poison.[3] After the death of her husband, Prim began systematically killing all other potential heirs with Gift.

In EC 491, Minister Presi used Gift to assassinate his rival, Prime Minister Genesia of Lucifenia.[4] By EC 494, Prim successfully poisoned all of her husband's children with his previous wife and a majority of the children he sired with concubines, leaving only her son to be crowned King.[2] At some point, Prim passed on her knowledge of Gift to her court mage, Abyss I.R.. The Second Gift continued to be passed down through the Rogzé family generations.[5]

"Through her failure, Margarita was able to further refine the Sixth Gift. It is a wonderful thing. There is no need to even drink it. It infects you through the air, leading one after another into the sleep called death—She magnificently created a greater epidemic than the Gula Disease!"
―Mayrana Blossom[src]

Sometime after, Julia Abelard taught her apprentice, Mayrana Blossom, how to create the poison.[5] Around EC 609, Julia ordered her disciple to enact an operation for Père Noël: transform the Gift poison into an airborne plague and then monopolize a cure through the black market. While Margarita Blankenheim was tasked with developing the cure.[6]

Mayrana experimented with Gift to create the necessary formula. Unsatisfied with the results, she deemed her Third Gift a failure. She then passed on the task to Margarita on August 25, EC 609, passing on her concoction and the formula to the Marchioness.[5] Margarita then developed a more dangerous Fourth Gift. Mixing it with trauben jam, she tested the variant on her husband and one of his mistresses on August 30.[7]

Margarita later developed the Fifth Gift and used the same method of poisoning on her father, Dr. Marx Felix, on September 18. Later that night, Marx slipped into a coma and was hospitalized in Aceid while remaining in critical condition.[2] By mid-October, Margarita developed the desired Sixth Gift and administered the poison to the orphans at Toragay's local Charity Institute. On October 17, all twenty-four of the orphans and staff succumbed to the poison.

As the weeks progressed, the plague spread throughout the entire town.[8] Quarantined by the World Police, the survivors eventually hid in the basement of the Blankenheim mansion. While there, some consumed the incomplete cure for the Gift sold to the local pharmacist to stay alive.

On October 21, Dr. Marx awoke from his coma and died of a seizure from the poison shortly after. That same day, Margarita arrived in Calgaround and finished refining her Seventh Gift to rekindle her memories and kill herself.

After ingesting the poison, Margarita died. By November 8, the Sixth Gift's death toll numbered over 300 and Toragay was seemingly wiped out.[5] Around mid-November, the 72 survivors hiding in the Blankenheim manor were discovered and transferred to a hospital in Aceid. After the source of the medicine keeping them alive was discovered, Dr. Puerick Rogzé formulated a cure from the Millennium Tree's sap to help eliminate the plague.[6]

Following the destruction of the Third Period in EC 999 and its subsequent merging with the Hellish Yard, Michelle Marlon, having contracted with Eve, began developing an Eighth Gift in the decimated site of Toragay. After completing her magical creation, the Sleep Princess unleashed her poison into the air and spread it across the Evillious region, putting countless souls across the region into a deep slumber.[9]

Gift was originally synthesized from the root of the greeonian plateau rose, which helped induce sleep in anyone ingesting it. Refined into a liquid medicine, it was easily digestible and could be mixed with other foods to ease the process. By entering the bloodstream, the poison relaxed the body's essential functions, including heart and respiratory activity, which induced a sleep-like state in the affected.

However, the resulting product required an extremely specific dosage; when overdosed, the body completely shut down, resulting in death; as a result, it was rarely used.[1] Symptoms of Gift's deadly effects caused the afflicted's throat to swell due to fluid build up from the inactive tissue.[2] Despite this, the relaxed state of the individual caused them to appear to be peacefully resting, causing the individual to look like they were simply sleeping at first glance.[8]

As it was further refined, Gift became extremely lethal in much smaller increments, making it an even more deadly poison. However, despite its effectiveness the enhanced poison was not guaranteed to kill the afflicted even in its smaller amounts. Also, as a result of advances in the field of medicine, the earlier variants became obsolete with regard to hiding the cause of death by the seventh century EC.

With the development of the Sixth Gift, the poison was developed into antibody-like structures that could travel through the air into other nearby individuals. As a byproduct, the poison seemed to effectively reproduce and spread like a virus, allowing it to become functionally a deadly plague that could spread to hundreds within a couple of weeks.[5] Improvements also included a delay in the poison's effects, causing the afflicted to not show symptoms for several days.[8]

Despite the potency of the Sixth Gift, the poison also suffered from the downsides of other diseases like it, and the afflicted could develop a resistance to its effects.[5] Compounding this, the tree sap from the Millennium Tree was able to delay the poison and was later used to formulate a proper cure that could completely eliminate Gift from the afflicted.[6]

The original formula for Gift, developed by the shamans of Elphegort. Although originally intended to act as a sleeping medication, it was easy to provide the incorrect dosage and cause premature death when ingested. Because of this, it was seldom used. It was utilized by Countess Mikulia of Calgaround to poison her husband, Gilbert.[1]

The Gift formula developed by Plus Rogzé. Improving upon the original product by Elphegort's shamans, the noble refined it into a deadlier poison. It was potent enough that a single drop could kill a person when ingested. It was used to great effect by his two children, Prim and Presi.[2]

The Gift formula developed by Mayrana Blossom. A refined variant of the Second Gift, it was mixed with animal blood as an experiment to hide its nature as a poison. However, due to an improper mix-ratio, the Gift was ineffective as a poison and deemed a failure.[5] It had a red color.

The first Gift formula to be developed by Margarita Blankenheim.[7] Improving upon the failed Third Gift, it was developed into a proper poison that could swiftly kill the afflicted when ingested. As a byproduct, it remained undetectable by seventh century medical technology after killing the affected.[2]

The second Gift formula to be developed by Margarita Blankenheim. Once ingested, it was able to put the affected in a comatose state for several weeks.[2] It was possible for the victim to briefly wake up from the coma but they would suffer from convulsions soon after and die.[5]

The third Gift formula to be developed by Margarita Blankenheim. The poison was transformed into an airborne toxin that caused the afflicted to die after several days of being in contact with the toxin; the infection spread like a disease over a wide range and was able to kill many within a short period of time.[5]

The fourth Gift formula to be developed by Margarita Blankenheim. Created as a means to help awaken subconscious memories, it was created by Margarita for her planned suicide attempt and help reawaken her fragmented memories. It had a teal green color.[5]

The Gift formula developed by Michelle Marlon sometime after the Third Period's destruction. Like the Sixth Gift, the poison was airborne. As it spread through the air, the poisoned thinned out until it became invisible to the naked eye. The poison was able to affect human souls, inducing them to enter a deep sleep. However, souls blessed by the Millennium Tree were immune to the poison's effects. It had a green color.[11] 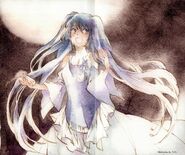 Margarita with Gift in Deadly Sins of Evil: Gift from the Princess who Brought Sleep 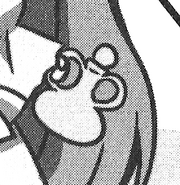 Gift as it appears in the Deadly Sins of Evil manga

Retrieved from "https://theevilliouschronicles.fandom.com/wiki/Gift?oldid=192724"
Community content is available under CC-BY-SA unless otherwise noted.