Gerda was the head maid of the Freezis Family. Serving Keel and Mikina Freezis for years, the woman become one of the oldest and most trusted employees among the household staff. After her fellow maid Michaela was targetted by the Kingdom of Lucifenia, Gerda fled the Freezis Mansion with the other servants in the wake of the Green Hunting, later reuniting with her masters at their new estate in Marlon.

Born in the Kingdom of Elphegort during the fifth century EC, Gerda became the head maid of the Freezis Family in Aceid. For her duties, Gerda directed the other servants alongside Keel's butler and chief aide, Bruno;[1] she also became increasingly strict towards Keel and Mikina's eldest daughter Yukina over the years[2]

"Michaela, Clarith. Do you have a moment? Earl Felix arrived earlier. Would you serve him, please?"
―Gerda[src]

After Michaela and Clarith were hired to replace some of their recently fired staff in November of EC 499, Gerda helped monitor their probation while the two helped clean and cook. When Keel and Mikina departed for Lucifenia with Bruno to attend Princess Riliane's birthday party on December 26, the couple left Gerda in charge for the next three days. Once Earl Felix and his entourage visited the mansion on December 28, she welcomed the earl and had him wait in another room for Keels' return.

The earl requesting to have Michaela and Clarith serve him specifically, the surprised Gerda summoned the two and, after learning they weren't acquainted with the earl, instructed them how to properly serve him tea.[1] She informed the two that Keel would be arriving shortly and waited outside for him to arrive.[3] A few months later, she had Michaela go out to buy soap and was exasperated when Michaela took too long to return.[4]

The next day, Gerda was summoned to a meeting with Keel along with Bruno, Michaela, and Clarith; there, she listened as Bruno explained that King Kyle Marlon had been put under house arrest by his mother, having rejected his engagement to Riliane in favor of an Elphe sweetheart which Keel suspected was Michaela. As Keel explained his future plans for dealing with the precarious situation, Gerda questioned if Riliane would come to kill Michaela and heard that it might be even worse than that.

Given this, the family made plans to protect Michaela should the worst occur,[4] and when the Lucifenian Army laid siege to Aceid a week later, Gerd joined the other staff in the living room in preparation to flee. Once Michaela and Clarith said their goodbyes and safely escaped out the back door, Gerda and the other staff fled the mansion as directed by Keel.[4]

"What kind of relationship do those two have?"
"The relationship you saw."
―Kyle and Keel regarding Arkatoir and Gerda[src]

Gerda later returned to the Freezis' employ after they moved to the capital city of Bariti in Marlon. During her service there she met Marlon's parliamentary secretary Arkatoir Marlon and became infatuated with him. After Yukina ran away from home in EC 504, Gerda and the other servants continued to keep her room clean until her return a year later. A day after the girl returned home, Gerda brought Kyle's last surviving painting to Marlon Castle on Keel's instruction, accompanying him and his son Shaw.

After dropping it off, Keel suggested Gerda help Arkatoir give Shaw a tour of the royal palace while he and Kyle talked in private. When Keel alluded as well to her crush on the man, the embarrassed maid hastily left the audience chamber with Shaw and Arkatoir and gave Shaw the tour.[5]

Gerda was a rather even-tempered woman, loyal to the Freezises throughout her employment. Having been welcomed by them with warm hearts within a country critical towards non-Elphes,[1] the maid deeply trusted the merchant couple and took their motto that employees were the same as family to heart.[4] Because of this, Gerda took her job as the head maid very seriously, remaining polite but strict and caring with all of the servants and even the Freezis children.[1] However, she also demonstrated a vicious temper on occasion, earning Yukina's comparison to a demon.[2]

After moving to Marlon, Gerda became infatuated with the young parliamentary secretary Arkatoir Marlon in spite of the sizable age gap between them; although enjoying fawning over him, she was nonetheless easily embarrassed by her relationship with him.[5]

Gerda boasted an impressive physique among the Freezis servants despite her age and was also the tallest, standing almost a head taller than even most of the men. Being one of the oldest employees to the Freezis family and the head maid, Gerda was also very knowledgeable about performing the household duties including cleaning, laundry, and serving food or tea.[1]

Keel Freezis: Gerda's employer. Gerda was strictly loyal to Keel as her master and worked hard to keep order in his household and do her duty to the fullest. As a result, she became one of his more veteran servants and obtained his trust to carry out important menial and managerial tasks.

Arkatoir Marlon: Gerda's romantic interest. After meeting with Arkatoir in Marlon, Gerda became smitten with the younger man and the two struck up a romance over time. Despite her affection, likely due to their difference in station and age Gerda was embarrassed when this relationship was pointed out.

Michaela: One of Gerda's coworkers. Gerda oversaw Michaela's entrance onto the Freezis staff and made sure that she and her friend were aware of how to perform their duties. Over time, she came to care about Michaela like another member of the family and agreed with the other staff to help protect her.

Clarith: One of Gerda's coworkers. Gerda oversaw Clarith's entrance onto the Freezis staff and made sure that she and her friend were aware of how to perform their duties. Over time, she came to care about Clarith like another member of the family. 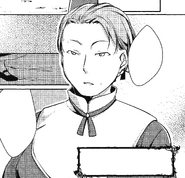 Retrieved from "https://theevilliouschronicles.fandom.com/wiki/Gerda?oldid=192445"
Community content is available under CC-BY-SA unless otherwise noted.