For other uses, see Freezis (disambiguation). 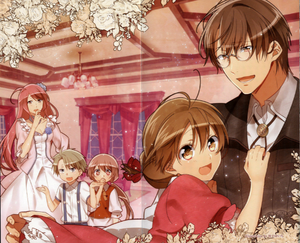 The Freezis Family[note 1] was a noble family of merchants hailing from the Kingdom of Marlon. After moving to the Kingdom of Elphegort, it became one of the most affluent families in Evillious. Following the Green Hunting, the family returned with its business to Marlon, expanding it into a massive conglomerate over the centuries.

During the latter half of the fifth century EC, one of the Freezis facility ghoul children babies awoke and later escaped the facility and lived in the Kingdom of Marlon.[1] Becoming an apprentice, "Keel Freezis" later entered a relationship with Mikina Sfarz. After Mikina became pregnant, the couple fled to Aceid in EC 491 and settled in Elphegort. They married in the same year and Mikina later gave birth to their eldest daughter, Yukina, on December 4, setting up a shop in the capital.[2]

The following year, Mikina gave birth to her second child, Shaw. Afterward, their business expanded across Evillious into the Freezis Firm and the family purchased a title of nobility in Elphegort, moving into a larger mansion. In EC 494, Mikina used the Marlon Spoon to kill her father and severely burn Shaw. She gave birth to their third child Aile the next year.[2] The family was later arrested during the Green Hunting and detained in the Lucifenian Royal Palace during EC 500.[3]

After they were released, Keel and his family returned to Marlon and settled in a new mansion, supporting the royal government's imperialistic efforts.[4] Afterward, Yukina's began publishing extremely popular books before fleeing from home in EC 504;[5] she returned the next year.[6] Several weeks later, Keel was knocked into a coma by his possessed wife.[7] Two weeks after that, Yukina fled in search of her mother before finding her along the Lucifenian coastline and returning home.[2]

After waking from his coma, Keel handed over the family business to his son and later died of his injury.[8] After her husband's death, Mikina became a recluse before dying surrounded by her children.[9] In EC 531, Shaw reorganized the Freezis Firm into the Freezis Foundation.[10] Over time, Yukina's fame as a writer grew exponentially and she eventually cohabitated with Kyle Marlon by the middle of the century.[11] At some point, Aile married a Marlon aristocrat and lived out the rest of her life in his care.[12]

After Shaw fathered several children, one of them had his grandchild, Dashaw Freezis; Dashaw was later selected as his successor in the Foundation.[13] Aile went on to have at least one child that would later sire Aai Freezis.[14] Sometime after, both Yukina and Aile passed away.[15] Aai later led the discovery of Maistia in EC 592 and its subsequent colonization.[16] Dashaw later burned to death during the Lioness Burning Incident in EC 597.[13]

On October 17, EC 609, Shaw died in his sleep of natural causes. A month later, Aai was selected as his successor in the foundation.[17] Following the rebellion of Marlon's Maistian colonies in EC 760, the Freezis family gradually lost power in the Blue Country's subsequent war with them until Maistia's independence was recognized and hostilities ceased in EC 776.[18]

Eventually, the Freezises grew their corporation into a massive conglomerate.[19] At some point, the family adopted the tradition of hunting Maistian slaves for sport.[20] Around the EC 940s, the family head, Múspell, sired three children, Surtr, Bindi and Loki. In EC 944, the Freezises realized that Elluka was making an empty promise and decided to eliminate her, fabricating the lie that witches were responsible for the strange phenomena in the world.[21]

Bindi later became the Minister of Finance for the USE,[22] while Loki became a judge for the Dark Star Bureau.[19] After Elluka "Ma" Clockworker became their enemy, the family had her indicted as part of the Levianta Witch Trials.[21] Loki later attempted to kill his rival Gallerian Marlon during a hunting trip in EC 960.[21] After being convicted of his crimes the following year, the family disowned Loki. The young man was later assassinated in prison by Shiro Netsuma.[20]

In 978, Bindi orchestrated the Titanis Sinking Incident, later pardoned for his crime. Collaborating with Gallerian, Bindi had the judge pardon his friend Jason Jack.[22] During the Leviantan Civil War in EC 983, Bindi was killed by Jorm Zusco under the orders of Gusuma Yarera while attempting to flee from Alicegrad.[23] Two years after, Múspell died, and Surtr inherited his position as president of the Freezis Conglomerate; the company continued to decline following the rise of the Tasan Party in Elphegort.[24]

After the destruction of the Third Period, all the dead members of the Freezis family residing in the Heavenly Yard were dragged back down to the earth as the ground world merged with the Hellish Yard.[25]

Retrieved from "https://theevilliouschronicles.fandom.com/wiki/Freezis_Family?oldid=189157"
Community content is available under CC-BY-SA unless otherwise noted.