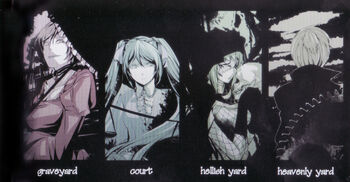 The Four Endings,[note 1] also known as the Four Last Things,[note 2] were four separate events that were all possible outcomes of the Third Period. They typically involved the world's destruction and varied in terms of the nature of their occurrence.

In EC 1000, Banica Conchita utilized the Neo Black Box created by Seth Twiright to travel to a parallel world aboard Evil's Theater II. She then presumably terrorized the world in pursuit of "evil" food.[2]

Due to the twins Adam and Eve prematurely starting a Re_birthday in EC 1000, the twins, Gammon Octo and Irina Clockworker were brought to a repeat of the Third Period, Irina becoming Alice Merry-Go-Round and living her life during the BT era. The Third Period's previous history then repeated numerous times.[2]

Thanks to the intervention of Allen Avadonia in EC 1000, he and his twin Riliane Lucifen d'Autriche used a golden key to create a new world: the Fourth Period. Said new world had a minimized influence by the gods and other beings from the previous world.[2]

The Third Period was created to allegedly last for roughly one thousand years;[3] due to the makeup of its rules, it was destined to end in one of four ways.[4] Said endings were typically orchestrated by a set of irregulars. However, it was also possible for all four endings to take place simultaneously, as well as for one ending's effects to be counteracted and thus turned into that of another ending.[5]

Retrieved from "https://theevilliouschronicles.fandom.com/wiki/Four_Endings?oldid=190863"
Community content is available under CC-BY-SA unless otherwise noted.