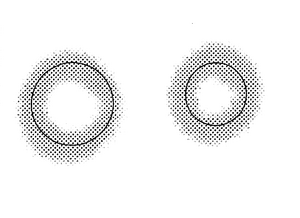 Forest spirits, generally regarded as simply spirits, were supernatural entities existing within the Millennium Tree Forest. Derived from the spirit data of earthlings from the Second Period, they served the earth god Held.

After Seth Twiright instigated the deaths of sixty-two of the earthlings aboard the Climb One, Levia Barisol preserved their spirit data on the ship.[1] In BT 528,[2] Held Yggdra arranged for them to be reincarnated as forest spirits in the Third Period's Evillious region, in the Millennium Tree Forest.[3] Forbidden from leaving the forest, the spirits lived in peace in service to the Tree of Held, often playing by the Lake of Amusement.[4] Later on, the earthling Lich Arklow also reincarnated into a forest spirit following his death on the Climb One.[5]

In EC 325, on Held's orders the spirits erected a magic barrier around the forest to keep out any mages from entering the woods, although eventually taking it back down.[6] During the EC 470's, the forest spirit Lich made Prince Arth into a mud golem following the death of his physical body.[7] He and another spirit, Eater Sabella, were expelled from the forest as punishment.[8]

In January of EC 500, the spirit Michaela escaped the forest and was attacked by a rollam bird. After being cared for a by a human for two weeks, the spirit was rescued and returned to the forest. A few days later, Held offered Michaela and Gumillia as disciples for the mage Elluka Clockworker and they were reincarnated as humans shortly after.[9] After the world's end in EC 999, the spirits used their magic to hide the presence of Nemesis Sudou during her fight with Ma.[10]

Spirits possessed immaterial bodies lacking physical form. As a result, their shapeless forms were genderless and could float or fly anywhere at their leisure. While spirits were able to communicate with one another, their spiritual forms were largely invisible to human eyes and inaudible to human ears. However, trained magic users were able to hear, see, and communicate with the spirits.[11] Having originally been earthlings,[12] spirits had the same range of intellect as normal humans, although their loss of memories of their old lives left many of them lacking in understanding human emotion.[13]

Spirits also possessed immense magical power typically beyond the ability of even powerful mages.[14] However, spirits were otherwise unable to interact with the physical world in their formless bodies, though essentially immortal as a result. Due to Held's power, spirits possessed the ability to transform into physical animals while within the Millennium Tree Forest.[15] These animal bodies were made out of a special mud within the forest; although these bodies aged over time, spirits had the potential to be reborn in a new animal form should the old body die.[16] While taking an animal form, spirits could heal from any injury while within the forest, as well as communicate with other spirits regardless of species while still remaining unintelligible to non-magic users.[17]

Retrieved from "https://theevilliouschronicles.fandom.com/wiki/Forest_Spirits?oldid=179895"
Community content is available under CC-BY-SA unless otherwise noted.