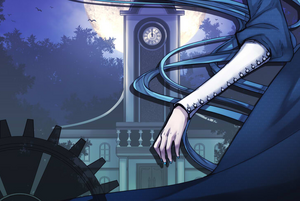 The Graveyard[note 2] was the cemetery surrounding the theater and the domain of the Master of the Graveyard. Built after corpses were found at the original construction site,[1] it was regularly patrolled by the awakened vessel of Gluttony and her servants later on.

Heartbeat Clocktower[note 3] was the tall clock tower at the center of the Theater and the domain of Gear. The awakened vessel of Greed protected and maintained the spire to preserve the life of the burned Clockworker's Doll.[12] Seventeen years after its construction, the clocktower broke down due to its aging parts.[15] Once Gear sacrificed his heart and linked himself to the tower, the clock began to work again and the Clockworker's Doll was saved.[17] As a result, he could neither leave the clocktower nor enter the main theater.[13]

An office where the vessels of sin were stored in the theater; this collection room was located in the interior of the theater's great hall.[2] The room itself had an interior room inside of it.[24]

A main hall in the building that had the director's office at its interior.[2]

Retrieved from "https://theevilliouschronicles.fandom.com/wiki/Evil%27s_Theater?oldid=188635"
Community content is available under CC-BY-SA unless otherwise noted.