Eugen was a soldier of the Kingdom of Elphegort and the nephew of Yatski's village chief. After leaving the army due to a dispute, Eugen became part of a crew of bandits haunting the Millennium Tree Forest. He later reformed after his gang kidnapped a girl and became a henchman for his uncle.

Born in the village of Yatski in the Kingdom of Elphegort during the 5th century EC, Eugen entered into the Elphegortean army and later left over a dispute. Becoming the leader of a band of thieves around the EC 490s,[1] the former soldier hid in the Millennium Tree Forest's abandoned home with his comrades for some time. In EC 492, the bandits captured Chartette Langley and held her at their hideout.

Eugen was later left to guard the prisoner while the others went out into the forest. During that time, the youthful girl convinced him to reform. When Chartette's friends, Allen and Germaine, approached the home, Eugen stepped out to stop them as they pulled out their swords on him. Once the situation was explained to the kids, Chartette left with her friends and Eugen returned home.[2]

"Is this sufficient for the price of the land?"
"It's enough."
―Michaela and Eugen[src]

After returning to Yatski, Eugen took up work assisting his uncle, the village chief. Accompanying his uncle around the village, Eugen helped him collect the land fees for Earl Felix, intimidating anyone who refused to pay their dues.[3] He also began teaching the chief's son, Ayn, how to use a sword at the boy's own request.[4]

One day in EC 499, Eugen joined his uncle to collect Clarith's land fees from her home. After they arrived, he silently watched the chief demand Clarith pay her fees until a visitor offered to pay the fees for her, giving them a generous amount. The two left the house and, from then on, they began collecting Clarith's fees from the new village resident, Michaela, in exchange for allowing her to stay.

After six months had passed, Eugen discovered his uncle had been pocketing some of the money for himself rather than giving them all to Earl Felix. He confronted the chief, threatening to expose his corruption unless he diverted his money into illegal channels. As a result, the chief poisoned and killed Eugen.[3]

"Eugen's been killed. My father's been insisting that Clarith killed him. Some of the lads are getting together to arrest you–get out of here now!"
―Ayn[src]

Immediately after Eugen's death, the chief blamed Clarith for the incident, claiming she poisoned Eugen out of resentment for her situation. After learning the truth, Ayn warned Clarith and Michaela about the village mob and helped them escape before reporting his uncle's corruption and deceit to Earl Felix.[3] After becoming a soldier for the Earl, Ayn later admitted he dreamed of one day becoming a strong knight and killing his father and Eugen to protect Clarith.[4]

Eugen was an earnest and loyal man. Although having joined the Elphegortean army, he abandoned the military life following a quarrel and led a band of criminals instead, living a life of lawlessness.[5] However, after encountering Chartette Langley, Eugen was convinced to reform his ways and left behind the criminal's path for good.[2] Besides his connection to Chartette, Eugen had a mixed relationship with Ayn, agreeing to help teach his eager cousin how to use a sword but nonetheless earning his resentment for his role in suppressing the people of the village.[4]

Eugen became very loyal to his job as his uncle's thug as well, accompanying him whenever needed to assure the government taxes were properly collected. Even having supposedly abandoned his criminal ways he still was not above extortion and trying to get a piece of his uncle's embezzled funds for himself.[3]

Having been a soldier in the Elphegortean army, Eugen was skilled with the sword and able to aptly teach the craft to others.[4] Possessing a hulking frame and burly physique, he was also rather strong. Because of this appearance, Eugen could intimidate others with ease, his glare alone able to scare any villager into silence. This made him excellent for being his uncle's muscle when collecting the tax money from villagers.[3]

Yatski Chief: Eugen's uncle and employer. Following his reform from life as a bandit, Eugen carried out his duties as the chief's assistant without complaint, often intimidating his critics and those who didn't pay their dues. Despite this, he drew the line at the chief stealing, and wasn't afraid to put a stop to his misconduct when it was discovered.

Chartette Langley: Eugen's captive while a bandit. Although posted in charge of watching the girl by his fellows, Eugen sympathized with the innocent child and was inspired by her to reform his ways, allowing her to go free unharmed.

Ayn: Eugen's cousin. Eugen had a regular familial relationship with Ayn, and saw fit to tutor him in swordplay despite the boy not having any use for it in the village. 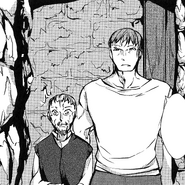 Retrieved from "https://theevilliouschronicles.fandom.com/wiki/Eugen?oldid=190840"
Community content is available under CC-BY-SA unless otherwise noted.