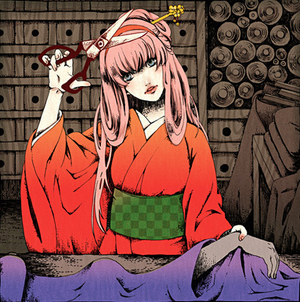 The Enbizaka Murderer Scandal[note 1] was the name given to the string of homicides caused by Kayo Sudou at Enbizaka in Jakoku. Murdering her victims in a peculiar manner, the tailor victimized a family of four and caused great pandemonium throughout the area, while concealing the true reasons why she murdered them to protect Enbizaka.

In early EC 838, Enbizaka was ravaged by a great fire in which many suffered or died, including the husband and son of the tailor Kayo Sudou,[1] who secretly being the daughter of the Demon of Envy contained envy magic within her.[2] Following the deaths of her family, Kayo was unable to mentally recover and began projecting her husband and son onto others who shared similarities with them.

In EC 842, the false Levin missionary Elluka "Ma" Clockworker used her Swap Technique to trade bodies with Kayo to give her a new life. Afterwards, Ma hypnotized the town into believing Kayo had always looked as she did.[3] Although trying to live her new life, Kayo nonetheless spotted Kai Miroku one day and, seeing a burn on his hand like her husband's, became convinced he was the deceased Gakuga Sudou.[4]

Later on, Kayo had a prophetic dream of a future in which she murdered Kai's family under the mistaken belief that he was her husband and his wife and daughters were his mistresses. In the dream, before her murder of Kai, he confessed to Kayo that he was a member of the Crimson Robed Masses and, rather than being her husband, he was the one responsible for the fire in which her family had originally died. In her dream, Kayo testified this at her trial and the magistrate Gato Octo declared war on the terrorist group, leading to the destruction of Onigashima and Enbizaka in particular.

When Kayo awoke, she was filled with a need for vengeance towards Kai, coupled with her feelings of envy that his family was still alive while hers had perished.[5] Eventually, on the night of a full moon,[6] Kayo met Kai's wife Mei Miroku late at night and brutally murdered her with her scissors before stripping her of her red kimono and disposing of the body. The body was discovered the following day and the murder investigated by the constables Uibee and Eikichi Akagi.[7] Under another full moon, Kayo similarly killed Kai's daughter Miku by the town bridge and stole her green obi, with Uibee and Eikichi again examining the crime scene.

By this time, Miku's lover Kiji Yarera began using the resources from his family's firm to investigate the case on his own.[8] When Rin Miroku returned to town after leaving to recover from the death of her sister, Kayo targeted her as well and murdered her on a beach,[9] again under a full moon and stealing her new yellow hairpin after doing so.[6] With Rin's disappearance, the magistrate determined that the murderer had a grudge against the Miroku family and a guard was put on Kai Miroku.[9]

Knowing from her dream that Kai would eventually scale Mount Izasa, and being suspected by Kiji's men, Kayo left Enbizaka in the clothes she stole from his family, having repaired and retailored them to fit her. Meeting Kai in an abandoned temple under the full moon, Kayo revealed herself as his family's killer; after explaining her reasons for doing it, she brutally murdered Kai and tore his body apart with her scissors. With her revenge complete, she left the mountain covered in Kai's blood.[6]

Kayo was quickly discovered at the base of the mountain and was arrested for her crimes.[6] During her trial a month later, Kayo feigned ignorance about Kai's true identity to prevent war with the Crimson Robed Masses, insisting that Kai was her husband and that she had murdered his family for being her husband's mistresses. She was convicted and sentenced to execution. Unable to die from a normal weapon due to the envy magic in her body, Kayo was executed by Kokutan-douji, a famed do-gooder who had been living with her at the time, wielding Grim the End.[5]

Kayo's head was then put on public display at the execution grounds for three days, where it was visited by her friends and Kokutan himself, as well as the traveling monk Gakusha. When Gakusha regained his memories and realized he was Kayo's husband, he refused to believe the head was Kayo's and he went back into Enbizaka to look for her.[10] Shortly after Kayo's execution, Ma conducted her own investigation on the events in Enbizaka by asking the being inside Kayo's scissors, Kagura Octo.[11]

Due to Kayo receiving Lukana Octo's body and having her prophetic dream, the timeline in which she murdered Kai out of mere jealousy of his "mistresses" and then testified that he was a member of the Crimson Robed Masses was split off into a new timeline unrelated to her own, as noted by the god, Behemo, in the aftermath of the case.[5]

With the discovery of Mei's murder, investigators noted the brutality of the attack but initially decided it the doing of a common thief due to the theft of her kimono.[7] With Miku's death, investigators discounted theft as the motive and began to believe the killer was targeting women.[8] When Rin disappeared, her body being washed off by the tide, the investigators determined she had been killed too and finally decided the killer was targeting the Mirokus in particular.[9]

Each murder sowed progressive seeds of chaos and fear throughout Enbizaka, to the point it was near hysteria by the time of Rin's death;[9] many were shocked by the reveal of Kayo as the murder, with some hating the tailor for her crimes and some pitying her for her apparent psychosis. Similarly, some were alarmed by her initial inability to be executed, believing her to be an actual monster.[5] Ma recounted the story of the murders in her series of short stories, Eastern Magic Record,[12] detailing her murders as having "shook society".[13] After Kayo's execution, Enbizaka quickly returned to a state of calm and was able to move on from the event.[14]

Due to Kayo's testimony, even Enbizaka's officials remained ignorant about the true reason why she had committed her murders, and many of Enbizaka's citizens believed Kayo to be merely an insane woman who thought Kai her deceased husband. Kiji Yarera and his men in the Yarera-Zusco Firm, due to their unofficial investigations, were one of the few to know the truth, with Kiji sharing the full story with Kokutan-douji after Kayo's trial.[5]

Retrieved from "https://theevilliouschronicles.fandom.com/wiki/Enbizaka_Murderer_Scandal?oldid=189147"
Community content is available under CC-BY-SA unless otherwise noted.