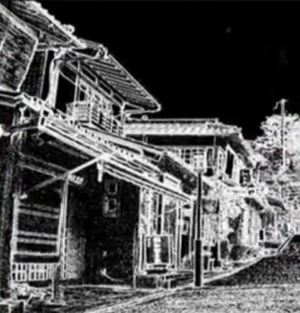 Enbizaka[note 1] was a city situated on a hill of the Onigashima island of Jakoku. Becoming a major hub for trade and immigration with the western Evillious region, it had a diverse population. It was subjected to a string of murders perpetrated by Kayo Sudou.

At some point, Enbizaka was founded on the hill slopes at the center of the Onigashima island. After the western Evillious nations made contact with Jakoku, trade and immigration was opened at Onigashima and Enbizaka became a major hub for the foreign merchants and immigrants.[1] In EC 838, the town was ravaged by a great fire. Afterward, the Freezis Foundation and Yarera-Zusco Firm financed the town's reconstruction.

In EC 842, everyone in the town was hypnotized by Ma into thinking Kayo Sudou originally had pink hair instead of black hair. During the spring, Kayo murdered Mei Miroku and her disappearance became the talk of the town. Several months later, she murdered her eldest daughter Miku; later on, she killed the youngest daughter Rin before killing their father, Kai. Driven into a panic, the city residents quickly confirmed Kayo was the culprit. The tailor was then arrested and executed a few months later.[2]

In EC 999, Enbizaka was completely decimated by Punishment.[3] Following the end of the Third Period and its subsequent merging with the Hellish Yard, Kayo Sudou created an illusion of the city.[4] It later experienced space-time distortions and the USE Dark Star Bureau courthouse manifested in town.[1]

The main road leading through the city. Due to Enbizaka's location, it gradually sloped upward and could be difficult to walk for long periods of time. The numerous shops and other buildings in Enbizaka could be found along the street.[1]

A collection of trading houses of various foreign businesses located on top of a hill. A branch of the Freezis Foundation and Yarera-Zusco firms were among the resident establishments and it was adjacent to the execution grounds. In EC 838, a fire started from the building, spreading to the surrounding area.[5]

The site where heinous criminals were publicly executed. It was located at the top of the hill and adjacent to the trading houses. After being beheaded, the criminal's heads would be put on display at the site to set an example for others.[6]

A tailoring business in the corner of Enbizaka and the residence of the Sudou Family. It was built in EC 820 by Nagare Sudou, who began running the shop as a source of livelihood for him and his wife. In EC 830, their daughter Kayo began helping out in the shop, eventually taking over after Kagura's disappearance in EC 838. Later that year, it burned down along with the other surrounding buildings. By EC 842, it was rebuilt and furnished with tailoring supplies by the Freezis Foundation Firm.[5] The shop tailored and repaired local clothing.[1]

A hairpin shop on the main street,[1] owned by Oyuka and her husband.[5] It sold well-crafted hairpins with a golden color.[7] In EC 838, it burned down in the great fire along with the surrounding buildings, but it was rebuilt by EC 842.

A soba shop located along the hillside.[5] It made and sold soba noodles. In EC 838, it presumably burned down in the great fire along with the surrounding buildings, but it was rebuilt by EC 842.

The Twin Mirror Bridge[note 2] was the main bridge leading into Enbizaka. A large gate post was placed at the end as an entrance to the main city. A sign with the city's name was located nearby.[8]

The Miroku Shop[note 3] was a dry goods shop and the residence of the Miroku Family, located at the bottom of the hill. A family run business, it was established by Kai Miroku sometime during the EC 800s. Following the great fire that struck Enbizaka in EC 838, the shop remained unharmed due to being located across the river. It sold fine clothing.[1]

The town clinic, managed by the town's doctor. In EC 838, the survivors of the fire were rushed to the building and kept there as their injuries were tended to.[5]

Enbizaka as it appears in Seven Crimes and Punishments

Enbizaka as it appears in Deadly Sins of Evil: The Tailor of Enbizaka
Add a photo to this gallery 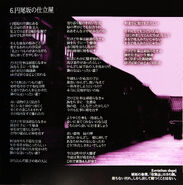 Retrieved from "https://theevilliouschronicles.fandom.com/wiki/Enbizaka?oldid=189546"
Community content is available under CC-BY-SA unless otherwise noted.