The Evillious Chronicles Wiki
Register
Don't have an account?
Sign In
Advertisement
in: Characters, Characters Represented by Megurine Luka, Humans,
and 13 more
English

Elluka Chirclatia, later Elluka Clockworker, was a mage of the Magic Kingdom Levianta and the fiancée of Kiril Clockworker. After being expelled as a priestess, she became the famous clockworker's assistant. She was later selected as a candidate of the seventh Project 'Ma' along with her future sister-in-law, Irina.

"Originally a resident shrine maiden in Lighwatch City. Driven out of the temple for delinquent behavior, she now lives as the assistant of her fiancé, Kiril."
―Note regarding Elluka in a Project 'Ma' report[src]

Elluka was born on January 30, BT 007 in the Magic Kingdom Levianta,[1] being the younger sister of Zellana Chirclatia. After their parents' death, Elluka and Zellana became orphans. Due to the two sisters being inheritors of Held, they were taken in by the temple in Lighwatch.[2] Though still a child, Elluka honed her skills and became a considerable sorceress, becoming the strongest priestess in the temple after sister's death in the first Project 'Ma'.[3]

During her youth, she followed the events concerning Project 'Ma' with Adam Moonlit and the 'Ma' candidate Eve Zvezda on television. [4] When one of the famed heads of Apocalypse, Meta Salmhofer, was arrested, the young Elluka calmly kept watch over her and spoke with her while she was imprisoned in the Lighwatch Temple. She was therefore present when the temple's head, Yegor Asayev, approached Meta to gloat about how he had betrayed Apocalypse and been "divinely pardoned" for his crimes.

While she listened to their conversation, Elluka came to understand that, while Meta was indeed evil, so too was Yegor. With some parting words between her and Meta about how she would consider leaving the temple, Elluka left the room. Later on, Elluka joined her fellow priestesses in saying a prayer over the apparently-executed Meta's casket, being the only one to notice Yegor smiling as she did.[3]

As Elluka grew up, she met and fell in love with the resident clockworker, Kiril Clockworker, and used her inheritor abilities to cure him of his HER symptoms. The priestess was later expelled from the temple for misconduct and became Kiril's assistant afterwards, moving in with him and becoming engaged to him. During this time, Elluka befriended Kiril's sister, Irina. When rumors began sprouting that the mage had met with the god Held residing in Elphegort,[5] she made it clear to her future family she had never even left Levianta during her entire life.[6]

In EC 013, both Elluka and Irina were selected as potential candidates for Project 'Ma' after being surveyed for their viability.[5] As the time of the final selection grew closer, Elluka became prepared to kill Milky Eights, Ly Li, and Irina as the competition grew hostile.

After the seemingly accidental death of Ly Li and apparent suicide of Milky Eights, Irina approached Elluka at the Levia-Behemo temple, pleading that they stop the pointless deaths and that Elluka become the new Ma. Accepting Irina's forfeit, Elluka embraced Irina in gratitude, only for Irina to stab her in the back and kill Elluka herself.[7]

Following her death, Elluka's soul presumably entered the Heavenly Yard. Sometime after, the sun god, Sickle, sent her to the land of Angolmois where Kiril Clockworker resided at the time, in order to reunite the two. Following their reunion, Elluka stayed by Kiril's side while he created music boxes,[8] becoming his wife at long last.

After the destruction of the Third Period, Elluka followed Kiril out of Angolmois for parts unknown, following a revelation that the latter had about the Clockwork Lullaby songs.[9]

After Elluka's death at Irina's hands, Levia began impersonating Elluka in order to convince Kiril to place the woman's corpse in the forbidden ark Sin. Following the resulting explosion caused by Sin, Levia and Behemo incarnated in Elluka's corpse and Levia, rendered an amnesiac, became the dominate soul. With the memories of her physical body, Levia lived on as the reborn and allegedly immortal "Elluka Clockworker", suffering from the guilt of losing her precious family and country for hundreds of years.[6]

Having survived the Levianta Catastrophe, Irina blamed her future sister-in-law for her mortal injuries and destroyed dream, swearing vengeance on her false incarnation;[5] the mage then continued to interfere with Elluka Clockworker's collection of the vessels of sin, only learning the truth about Elluka centuries later. When explaining her reasons for why Elluka Clockworker couldn't be the real Elluka to Levia, Irina cited the contradictions in her friendship with Held and inability to recognize Prim Marlon as a HER.[6]

Elluka was a kind-hearted but determined woman. Forgiving and loving, she was devoted to her beloved Kiril despite him originally being a HER, removing the man's symptoms and willing to marry him,[10] as well as staying by his side for good after being reunited with him.[9] This devoted behavior extended to his younger sister Irina, Elluka becoming willing to protect Irina from the secret murder of the 'Ma' candidates despite their hostile competition.[7] Even at a young age, Elluka demonstrated a calm levelheadedness and compassion as befitting a priestess, such as in her dealings with Meta and her understanding that Yegor, despite being "pardoned" for his crimes, was no better than the former.[3]

Despite her kindness, Elluka's personality could cause trouble, as she was discharged from the temple in Lighwatch for misconduct.[5] Her desire to become the Ma also presumably made her willing to even kill some of the other candidates for the position.[7] Regardless, Elluka was devoted to her work as a priestess and the removal of Hereditary Evil Raiser Syndrome from the populace,[10] as well as showing herself to be forgiving towards Levia.[8]

"She has the highest magic of all the current candidates, but the low level of her other values may be a small cause for concern."
―Note regarding Elluka in a Project 'Ma' report[src]

Elluka was a powerful sorceress, regarded with respect by her peers. As such, she possessed a wide range of magical talent,[5] becoming the most powerful priestess in the temple where she worked from a young age.[3] Due to being an inheritor of Held,[2] among her powers was the ability to detect HERs and remove their genes of malice.[6] Despite her amazing magical power, she was heavily lacking in other areas measured for candidacy in Project 'Ma'.[5]

Kiril Clockworker: Elluka's husband. Falling deeply in love with the Kiril after curing his condition, Elluka wished to join his family and eventually came to live with him, both as his fiancée and to assist him in his work. This continued past her death after she was reunited with Kiril in Angolmois, with Elluka staying by his side and soothing his past anger towards Levia for impersonating her.

Irina Clockworker: Elluka's sister-in-law. As the sister of her loved one, Elluka cared deeply for Irina despite their later competition to become the next candidate for Project 'Ma' putting a strain on their relationship. As a result of her sister giving her the candidacy, however, the touched Elluka resolved to protect her sister-in-law.

Levia: Elluka's chosen deity. Although never meeting the god herself, Elluka worshiped her as a member of the Levia-Behemo temple. After Elluka's death, Levia received her body and residual memories, believing herself to be Elluka as a result. The real Elluka did not appear to hold Levia's past actions against her, believing that "Elluka Clockworker" could be a savior, herself, if she regained her humanity. 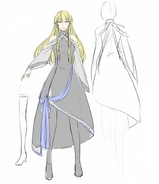 Concept art of Elluka by Ichika

Elluka along with the other Ma candidates in Ma Survival

Elluka's silhouette in The Song I Heard Somewhere 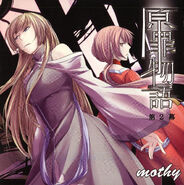 Elluka on the cover of Original Sin Story -Act 2- 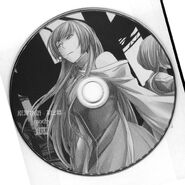 Elluka in the album CD 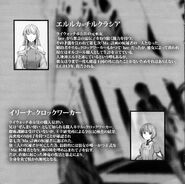 Elluka as she appears in the album trailer