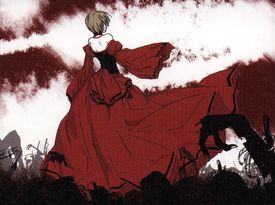 The Disappearance of Evil Food Eater Conchita refers to the increasing seclusion and hedonism of Banica Conchita throughout the early EC 320s. Becoming obsessed in her opsomania, Conchita withdrew from Beelzenian society and her duties as Duke, rumored to have descended into cannibalistic habits, until she was discovered missing altogether.

To celebrate the birth of Duke Muzuri Conchita's daughter Banica in EC 296,[1] a feast was held on their estate in which the family and staff partook of a rare baemu pig with a glass inside its stomach; as a result, the Conchita family and their staff contracted the Gula plague and servants began dying on a daily basis. Muzuri consulted the sorcerer AB-CIR who, in exchange for the glass, explained the plague and its origins, instructing the Conchita family to satiate their growing appetites for ten years to escape the disease.

Desperate to survive, Muzuri imposed heavy taxes and confiscated goods from the people in his territory. As a result, when a famine struck Beelzenia, the populace suffered greatly. The servants eventually died off and, attempting to eat their corpses, Muzuri's wife, Megour,[2] was killed in EC 306;[1] as a result, Muzuri was stripped of his rank as Duke by Empress Juno Beelzenia.[2]

Following her death, the servants Arte and Pollo were hired onto the estate to watch over the growing Banica, whose appetite became insatiable.[2] In EC 316, after the noble was old enough, she embarked on a journey around the world, bringing back multiple foreign cuisines and crops; in the process greatly expanding the diet of Beelzenia and thus earning immense popularity with its people.[1] During this time, Banica continued to grow grossly overweight. Due to her contributions, the Conchita line was reinstated as Duke.[2]

After the death of her father, Banica took increased comfort in eating and her weight reached alarming levels; by EC 323, she collapsed due to her excessive eating and lingered on the verge of death.[1] At the same time, Pollo and Arte brought the Glass back into the estate with the Demon of Gluttony inside. After being approached by the Demon, Banica eventually made a contract with it in order to live and dedicate her life to eating the inedible.[3]

Banica soon began pursuing her gruesome diet with a new, healthier body, shocking many of the Beelzenian nobles by devouring live insects at Duke Oruhari's banquet.[4] On the grounds of her illness, Banica cut herself off from the rest of society and forbade anyone from seeing her.[1]

In addition, using the powers of her Glass, she reanimated the staff that had been victims of the Gula plague and made an army of undead soldiers to protect the mansion under Arte's command;[4] secure on the estate, she left Arte and Pollo in charge of governing her territory.[1] As each cook she hired became completely disgusted by the meals she had them cook for her, Banica grew annoyed and had each of them killed by her servants, devouring the "traitors" as punishment.

Meanwhile, in a plot to retrieve the Glass from Banica, AB-CIR hired the thief Platonic to steal it from the Conchita estate. Using the Association intelligence network, the girl was able to infiltrate the mansion; while attempting to steal the vessel of sin, however, she was impeded by Banica's servants and undead soldiers, and forced to flee after encountering the Duke.[5]

AB-CIR later acquired another agent in the form of one of the Hedgehog lord's political prisoners, Prince Carlos Marlon. A former fiancé of Banica's, Carlos volunteered to become a spy for the mage in exchange for his freedom. Using the Venom Sword, AB-CIR disguised the prince's appearance and he entered the Conchita estate as a famous cook, under the name Joseph. At some point, Banica and her new cook entered into a romance,[6] with the Duke becoming impregnated by the prince.[7]

As Banica became more and more attached to her dining hall, she severed her ties with the Beelzenian Empire and neglected her responsibilities even further, to the point of executing any imperial messengers to enter her home. In response to this negligence, the Beelzenian army mounted an assault on her estate in the summer of that year; Banica, through Arte and Pollo, commanded her undead soldiers to retaliate and sent them all over the region, causing destruction and mayhem in the nearby towns.

After an attempted escape by Carlos, he was recaptured and Conchita forbid him from leaving the estate. As a result, Carlos conspired to kill the both of them, putting poisonous shavings of the Golden Key into a soup and serving it for the both of them. When the assassination attempt failed and Carlos succumbed to the poison, Banica cannibalized his remains.[6]

Following the death of her lover, Conchita continued her gluttonous and now cannibalistic activities, at some point giving birth to her and Carlos' son.[7] As rumors began circulating about the apostate Duke's behavior, the Beelzenian Empire contracted Elluka Clockworker to investigate the Conchita estate in July.[1] Elluka set out through the undead infested territory with the aid of Platonic. During the course of her travels, the sorceress learned of Conchita possessing the Glass by interrogating a captured undead soldier.

Around the same time, Banica's appetite drove her to devour Arte and Pollo. Having exhausted the food storage, Banica was left alone, save for her child, and decided to eat herself despite the Demon of Gluttony's protests. Soon afterwards, Elluka and Platonic entered the mansion to find it empty and in perfect order. The only traces left of Conchita's disappearance were the baby and Glass, the latter of which Platonic acquired and later gave to AB-CIR. After Elluka reported her findings to her employers, the baby she found in the mansion was given to a servant of Empress Juno for adoption, and her investigation was discontinued.[7]

Conchita's efforts to fulfill her gluttonous tastes led to culinary growth in the Beelzenian Empire, with multiple recipes and foods gathered from all over the continent and added to the diets of its citizens. Due to this, the empire was able to survive its decline a little longer as the famine was alleviated.[8] The towns and villages in her territory, however, were devastated by the attacks of her undead hordes.[6]

Following these events, a Beelzenian minstrel, Xenos Jaakko, would relate Conchita's story to his grandson Will,[9] who later wrote extensively on Banica and the Seven Deadly Sins.[10] In addition, the author Sanan Noi was inspired to write and publish a fairy tale based on the Duke, called "Vampiress Vanika."[9]

Banica's child continued her lineage down to Germaine Avadonia, who led a revolution in Lucifenia;[11] the Conchita family line, however, had ended with Banica's death. After she ate herself and the Demon inside her, the Duke usurped its position as the new Demon of Gluttony and exerted her newfound powers to pursue her own ends throughout the centuries that followed.[12]

On the onset of Conchita's opsomania, many other nobles of the empire were disturbed by her eating habits, although she was well celebrated throughout the empire for saving Beelzenia from the famine and even received the nickname "Gourmet Noble Banica". Despite this, Banica's estate became the subject of many rumors after her illness and subsequent weight loss, with the nobility of the empire shocked and disgusted by the gruesome foods she ate. As Banica became more secluded and cut off her ties to the Beelzenian Empire, the rumors spread wildly around the populace of her descent into cannibalism, with the noble attaining the new name "Evil Food Eater Conchita". These rumors turned to outright fear after the attacks from her undead hordes, while few knew the truth behind her behavior and the power of the Glass.[4]

Following Conchita's death, her disappearance was officially attributed to the Duke fleeing the estate with her remaining staff.[1] The citizenry, however, continued to circulate stories of the cannibalistic duke, with figures like Xenos Jaakko relating the tale to younger generations. After Sanan Noi's fairy tale "Vampiress Vanika," was published,[9] Banica was cemented in folklore as a monstrous figure with supernatural abilities, the story becoming popular even outside Beelzenia and often dwarfing her historical narrative as the centuries went by. Some later generations appreciated Banica's earlier service to Beelzenia during the famine and elsewhere, claiming that the Empire would have declined much sooner without her aid.[8]

Retrieved from "https://theevilliouschronicles.fandom.com/wiki/Disappearance_of_Evil_Food_Eater_Conchita?oldid=179842"
Community content is available under CC-BY-SA unless otherwise noted.