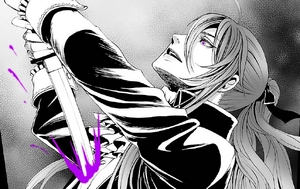 Demon Contracts[note 1][note 2] were magic covenants forged between the Demons of Sin and their human hosts. Ranging in method and effect, they gave certain benefits to both demon and contractor, allowing the contractor to have access to the demon's power in exchange for demonic possession.

Demon contracts allowed the human contracting with the demon to have access to its power in exchange for demonic possession and influence under the demon.[1] As a result, all serious injuries inflicted upon a contractor were automatically healed by the demon, making the contractor essentially immortal by conventional means. As a drawback, the demon needed the contractor to be within a close proximity to its vessel to fully utilize its healing powers, only able to prevent the soul from leaving the body if the contractor was mortally injured.[2] Similarly, a contractor could be killed by the power of a demon, including the demon they were contracted to.[3]

A contract could also grant a human additional powers from the demon, the abilities varying between each of the demons as well as sometimes depending on the host's compatibility with the demon in terms of personality.[4] In some cases, additional actions were required to be taken in order to properly forge these contracts; these typically involved interacting with the demon's respective vessel, though the method varied between each Demon of Sin.[5] However, the demons could forge contracts without the host's knowledge, though restricting them access from the full use of the demon's power.[6] Contracts could also be forged through a demon's familiars or a third party borrowing the demon's power.[7] Because the demons' true bodies remained in their respective vessel,[8] they could dissolve a contract at virtually any time and abandon the host.[9]

Retrieved from "https://theevilliouschronicles.fandom.com/wiki/Demon_Contracts?oldid=189220"
Community content is available under CC-BY-SA unless otherwise noted.