The Evillious Chronicles Wiki
Register
Don't have an account?
Sign In
Advertisement
in: WIP Articles, Books, Novels,
and 8 more
English

Deadly Sins of Evil: The Tailor of Enbizaka

Judgment of Corruption Side Story: Gallerian

Are you looking for the song titled The Tailor of Enbizaka?

What's The Tailor of Enbizaka?

"But I have to keep at my work"

The song was posted by mothy on Nico Nico Douga in December, 2009. It used the VOCALOID Megurine Luka for the vocals. The song with the theme of "Envy" the Seven Deadly Sins Series, it tells the story of Sudou Kayo: a proprietress running a tailor shop in Enbizaka. Happening to see her "beloved" in a happy relationship with an unknown woman, the sad sight of Kayo shedding tears and devoting herself to her work is portrayed.

This section is currently incomplete; we apologize for the inconvenience.

The narrator describes how she embodies two pairs of scissors that used to belong to the tailor Kayo Sudou. Explaining how she can see the surrounding landscape of Enbizaka on the Onigashima island, Elluka "Ma" Clockworker enters the house the narrator is in. After being asked if there is anything she wanted to speak about before being destroyed, the narrator agrees to tell Kayo's story.[1]

The narrator flashes back to four years ago, where Kayo's husband warns her about the impending fire spreading across town. Fleeing the house with their son, a burning house falls over Kayo. Losing track of her husband, she eventually blacks out. After she comes to, she listens to Mei Miroku explaining that she was the only survivor of the fire.

Afterward, Elluka and the narrator discuss Kagura Octo and her family, and how Kayo was taken in by them. Elluka asks why the scissors were not taken from Kayo while she was under their care.[2] The narrator then goes back to the story, explaining how Enbizaka was able to rebuilt thanks to Perrié Cutie Marlon. At the Octo residence, Bufuko Tsukimoto and Enbizaka's local doctor discuss Kayo's amazing recovery; soon after, Anan Octo arrives and interrogates Kayo before commanding her to leave.

After Kayo returns to Enbizaka, she meets Miku Miroku at her rebuilt tailor shop. Miku then explains how her mother had arranged for the shop to be rebuilt by the Freezis Foundation before leaving. Weeks later, Kayo visits the Freezis trade house to deliver Bufuko's requested maid outfit and encounters Perrié; she is then introduced to the foreign missionary Elluka "Ma" Clockworker by Anan. Soon after, Kayo and Elluka converse about the former's troubles. Elluka then agrees to meet Kayo in three days' time at her home.

The following day, Kayo visits the Miroku Shop and meets Rin Miroku, who tells her about her feeling of waiting for someone before Kayo agrees with the sentiment and leaves. Two days later, Elluka visits the Sudou shop and speaks to Kayo about the history of the Octo clan before demonstrating her wind and fire magic to the tailor. After Kayo explains her fits of envy, she agrees to swap bodies with Elluka.

Elluka asks the narrator how she knew the Swap Technique's name, as well as the circumstances of Kagura's disappearance. After the narrator explains how her scissors were found at a coastal cliff and that they witnessed her go down into the sea, Elluka speaks about her new writing hobby as well as how she had hypnotized everyone into thinking that she and Kayo had always had their respective bodies before the narrator returns to telling the story. A Freezis Foreign Fairy Tale is then displayed, telling the tale of Jahime Hatsune and her efforts to conquer all of Jakoku before being defeated by Gaou Octo and his allies.[3]

Kayo visits Yuka Musubi's hairpin shop and complains about her husband and son not coming home before being invited to dinner by Yuka; declining, the tailor leaves. Sometime after, Kayo spots Kai Miroku on Twin Mirror Bridge; Kai then meets with Perrié for business matters before leaving. Returning home, Kai is greeted by Rin; told Miku is possibly still at her lover Kiji Yarera's house, the man begins ranting about his hatred of foreigners. Another morning, Yuka visits Kayo and offers her sweet buns before discovering that the tailor had had a strange dream. Afterward, Elluka explains to the narrator her prophetic dream ability before discussing how Kayo projected her husband's image onto Kai.[4]

Going back to the story, the narrator explains how Mei's corpse was found on main street, with Detective Eikichi Akagi and Constable Uibee Aoi investigating the scene. Yuka then visits Kayo again, reporting Mei's murder before being told Kayo didn't remember much of her relationship with Mei before the fire. Flashing back to the day of Mei's murder, Mei and Kai discuss the latter's burns and how Kai went outside on the night of the fire. After the two part ways, Kayo reveals herself and murders Mei, cutting her throat before stabbing her in the chest. Afterward, the narrator and Elluka discuss how Kayo possibly thought Kai was her husband and how Mei was Kai's mistress.[5]

The narrator then goes on to say another murder occurred soon after, although her voice couldn't reach Kayo. The narrator then explains how Miku became lovers with Kiji Yarera, a foreign employee of the Yarera-Zusco Firm, during the reconstruction efforts of Enbizaka. Yuka visits Kayo again and tells her about Miku's murder, and how her corpse was found up the river. Meanwhile, Constable Uibee reports the murder to Kai at the Miroku shop. Uibee then interrogates Perrié about having done business with Mei and Miku right before their deaths. After Perrié claims they had no trouble, Anan confirms her story as a witness and then shares that Miku was pregnant with Kiji's child. Uibee then leaves; after Anan questions her regarding Elluka, Perrié threatens him and asks his maid to clean more thoroughly.

Afterward, Uibee returns to the Miroku shop and interrogates Kai about his quarrel with Miku about her pregnancy. Kiji then arrives at the shop; after Kai attempts to attack Kiji, Uibee breaks them up before Kai drives Kiji out. As Kiji leaves, Uibee approaches him. Kiji then states that he intends to catch the culprit of Miku's murder himself. Several days later, Kayo visits Yuka's hairpin shop and overhears her lecturing Eikichi for hiding there while skipping work; Eikichi then speaks to her about Kokutan-douji and his traveling party heading to Enbizaka.[6]

Sateriasis, Banica, Margarita and Lemy in the story recap

Miku in front of the Sudou tailor shop

Kai walking with his wife Mei

Rin confronting Kayo at the beach

Ma talking with the Demon of Envy

Profiles of Kai and Mei Miroku

Profiles of Rin and Miku Miroku

The light novel and "Playing Cards of Evil" deck 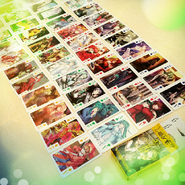