The Evillious Chronicles Wiki
Register
Don't have an account?
Sign In
Advertisement
in: WIP Articles, Books, Novels,
and 12 more
English

Deadly Sins of Evil: The Lunacy of Duke Venomania

Tale of Abandonment on a Moonlit Night

For other uses, see The Lunacy of Duke Venomania (disambiguation).

What's The Lunacy of Duke Venomania?

The song was posted on Nico Nico Douga in July, 2010. Using Camui Gackpo as the main vocals, other VOCALOIDs were tailored throughout the musical. The song with the theme of "Lust" in the Seven Deadly Sins series, staged in a world with medieval European style, it depicts the life of the Duke that was drowning in the lunacy of his contract with a demon.

I.R., a powerful sorceress, is a girl born with Hereditary Evil Raiser Syndrome; after the destruction of Magic Kingdom Levianta, she searches to create more Hereditary Evil Raisers in the world, taking a sin vessel and the girl Haru Netsuma for her purposes. In EC 135, I.R. approaches the Venomania Mansion, in the hopes of influencing Duke Ilotte with the vessel, a sword.

After no one answers the door, I.R. enters on her own and finds the mansion strewn with the corpses of the former staff; she enters the lounge and discovers the murderer about to take his own life. After stopping him, I.R. discusses the man's motives for the murders, finally offering him use of her vessel of sin. Encouraged by the voice of the Demon of Lust, the man makes the contract.[1]

Some time later, Duke Sateriasis Venomania staggers through the Lasaland New Year's Festival in a tattered state and collapses; a single woman comes to his aid. The woman, Lukana Octo, was a resident of Mystica who had a prophetic dream which saved her hometown ten years previous. Now, Lukana waits for the Duke Sateriasis Venomania to wake up in her uncle's tailor shop. As the duke wakes up, Lukana speaks to him on his health and the mysterious murders that resulted in Sateriasis becoming the new duke.

Soon, Lukana's uncle also enters; after giving the duke a new set of clothes, he informs his niece of a rumor that Sateriasis had lost some of his memories. After the duke finishes changing, Lukana walks with him back to his mansion. After coming inside with him, the two discuss the duke's haggard state of living along with his loss of memories; ultimately, Lukana agrees to stay in the mansion and help by tailoring for him a new set of clothes. Meanwhile, I.R. waits, bored, for Venomania to give in to his lustful urges.

Two weeks later, Sateriasis visits Lukana in her makeshift workshop and watches her as she sleeps, resisting lustful thoughts. Lukana soon wakes up from a nightmare and, after the two speak, she leaves for the day and bids the duke farewell. Five days later, Lukana completes the clothing and presents it to the Duke, allowing him to put it on while they talk; she then surprises Sateriasis by preparing to leave immediately, brushing off his attempts to dissuade her.

Once at the city gates, she bids Sateriasis farewell, firmly rejecting him as she does so. Shocked, the Duke flashes back to his earlier rejection from Gumina, and in the process recovers his memories. He is immediately approached by I.R., who insists he pursue Lukana before she's gone for good. After discussing how to catch up to her with his powers, Sateriasis calls upon the Demon of Lust and sprouts wings, taking off after the tailor. Catching up to her, Sateriasis insists they get married despite her protests; Lukana bemoaning his apparent contract, refuses as Sateriasis persists. The Duke then prepares to brainwash her, his appearance becoming more demonic, and Lukana again laments her prophetic dream coming to pass.

Ignoring her, the Duke uses his abilities and the tailor gives a final warning  before submitting to the mind control. Afterwards, Sateriasis kisses Lukana before being spotted by a green-haired girl nearby, who attempts to escape. I.R. appears soon after, berating him for allowing himself to be discovered, and Sateriasis attempts to brainwash the girl as a result. The spell failing, the girl finally escapes and the perplexed Duke discusses what to do next with I.R. On her counsel, the two return to the mansion with Lukana for the time being.[2]

Weeks later, Sateriasis has a nightmare of a woman rejecting him for his ugly appearance and wakes on the way to Abito. He and I.R., in her cat body, debate the necessity of traveling by carriage as well as the implications of their being seen speaking together. They then discuss the village of Abito, with Venomania unable to remember if he had visited it; the Duke broods over his yet missing memories before speaking to I.R. over the girl they were after, Mikulia Greeonio, and I.R.'s connections in the government. The two then discuss Sateriasis' escapades with Lukana over the past week, and the Duke broods over how next to proceed building a harem and obtaining Gumina with his powers, before they arrive in Abito.

Meanwhile, Mikulia Greeonio entertains fantasies of being a princess who will one day meet her prince, treated like a nuisance by the other villagers. Sateriasis and I.R. are met in the village by the chief, who questions their business before beginning to reminisce about Duke Ilotte. After an hour passes of this, I.R. runs off ahead until spotting Mikulia; she follows the girl and watches her perform the prayer of the Held sect. As she watches, the cat is discovered by Mikulia, who surprises her by remarking on the "demon's minion" and understanding her speech.

Before I.R. can question her, Sateriasis arrives and Mikulia excitedly greets him, explaining how she came to the conclusion that the Duke was her demon prince. The perplexed Duke attempts to use his spell on her, only for Mikulia to happily accept his advances in spite of it. I.R. arranges to take Mikulia to the Venomania Mansion that night and the girl leaves. Carelessly wondering about I.R.'s motives, Sateriasis returns to the mansion alone. That night Mikulia returns to the mansion and spends three nights with the Duke.[3]

Several hundred years later, the Venomania Event has been all but forgotten by history. In this era, having just returned home to visit his daughter, Gallerian Marlon is visited by Gammon Octo. The two argue over Gallerian's conviction of the man's brother, Nyoze, and Gallerian sends him away. Once alone, he enters his daughter's room and finds Ma sitting next to Michelle.

Per her request, the judge retrieves the Venom Sword from his treasury. The two discuss their progress in collecting the sin vessels, and Ma prepares to depart, reminding Gallerian to hold on to the spoon she gave him to speak with Michelle. As Ma exits the room, she hears Gallerian having a one-sided conversation with Michelle and then leaves, amused.[4] 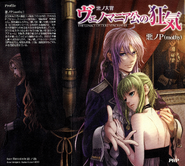 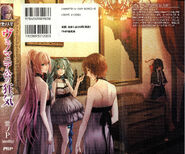 The light novel's back cover

A full view of the light novel's cover

Venomania and Gumina watch as one of his portraits burn

Lukana and Lilien together again while Mikulia plays with her doll 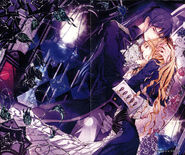 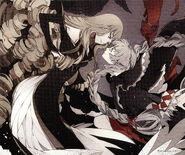 A encounter between Elluka and I.R. 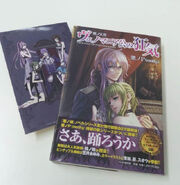 First edition of the novel and complementary illustration card

A calender and visual novel promoting the novel's release