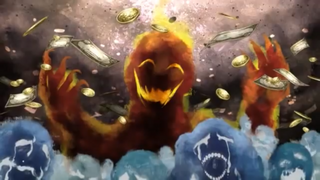 The Dark Star Scandal refers to the corrupt dealings perpetrated by Dark Star Bureau Director Gallerian Marlon during the late EC 900s. After being convinced to collect the vessels of sin by Ma, Gallerian began taking bribes to judge in favor of his clients, causing corruption to plague the justice system of the Dark Star Bureau.

Sometime during the late 10th century EC, Gallerian Marlon became bureau director of the USE Dark Star Bureau, establishing the bureau's police force PN and becoming its master.[1] Following his wife and daughter's tragic deaths in EC 978, Gallerian became wracked with grief. Consulting with his friend Ma, the judge agreed to collect the vessels of sin, believing the Clockworker's Doll was his daughter Michelle and that he could heal her disability through the wish-granting power of the sin vessels. Gallerian then forged a contract with Adam Moonlit inside the Marlon Spoon.[2]

Presiding over the Spoon Corruption case, Gallerian bribed the bureau's employees to keep silent about Ma's theft of the spoon, having the documents rewritten so that it would be under his possession. Starting with Bindi Freezis who orchestrated the sinking of the Titanis, Gallerian began accepting bribes to judge in favor of his clients, with the clients being ruled innocent and their enemies being ruled guilty.[3] Meanwhile, after being convicted for her criminal offenses, Nemesis Sudou was saved from prison by PN.[4]

Later that year, Gallerian confirmed that Nyoze Octo was in possession of the Venom Sword and, with the help of PN, had Nyoze framed for the murder of Medea Col.[3] Nyoze later escaped execution.[5] That same year, Gallerian discovered the Glass of Conchita and one of the Four Mirrors of Lucifenia was at the local Graveyard restaurant and dispatched a warrant for the workers' arrest, confiscating the vessels for himself and shutting down the establishment.[6]

As time progressed, PN successfully completed numerous assassinations for Gallerian, disposing of his enemies. With the corruption spreading to many officials within the court, Gallerian was free to profit off his deceitful rulings; using this new wealth, he soon managed to obtain the rest of the Four Mirrors of Lucifenia.[7]

Sometime during Gallerian's career, he was bribed by the famed celebrity Scherzer and judged him not guilty of assaulting a woman. Later on, Gallerian received a tip from Ma that a whistleblower had claimed Scherzer was responsible for a number of female disappearances. Gallerian immediately tracked the whistleblower to Scherzer's financial manager, Bogaerts, and confirmed the celebrity was kidnapping and defiling numerous women in his suburban mansion.

Promised the celebrity's entire fortune for his execution, Gallerian agreed to the bribe and sent a police squad to investigate the premises and arrest Scherzer. The celebrity later broke into his mansion, asking to be saved again. After misleading Scherzer into believing he would help him for ten times the previous bribe, Gallerian judged the man guilty for the crimes and had him executed.[8]

In EC 982 Gallerian ordered the construction of a small theater to be built on the premises of an abandoned property in the Millennium Tree Forest to store the vessels.[9] In the meantime, Nemesis Sudou was officially inducted into PN as an assassin, No.8. After construction of Evil's Theater was completed in December of EC 982, all the vessels in Gallerian's possession were moved there.

Around the same time, Gallerian's aide Bruno Zero tracked the fugitive Nyoze to Rolled, hiding with Nemesis. Later that month, Nemesis was ordered to kill her lover and completed the mission.[10] By the summer of EC 983, the corrupt judge had collected six of the seven vessels and garnered a fortune from his shady dealings.[9]

In August of that year, General Tony Ausdin was charged with the massacre of Zenosai village and tried by Gallerian. After Gallerian accepted the bribe and ruled the general innocent, evidence of Gallerian's corruption was leaked to the press. Riots then broke out in the streets of Levianta in opposition to the injustice. In the chaos several figures were killed, including Jason Jack and Bindi Freezis,[5] with General Ausdin being shot and killed by Nemesis. Following this, the rioters surrounding Gallerian's home; also trapped into a confrontation with Nemesis, Gallerian was killed and his home burned down.[11]

After the riots had been suppressed, the mangled corpse of General Ausdin was discovered in his backyard.[12] As the sole benefactor in his will, Ma inherited Gallerian's remaining collection in his home before disappearing from the public eye a few days later.[13] The rest of the collection was stored in the small movie theater thereafter and was largely ignored until being rediscovered in EC 990, leading many to go missing after entering the Millennium Tree Forest in search of Gallerian's vast fortune.[9]

With known criminals and murderers being exonerated while innocent citizens were being convicted, public opinion for Gallerian quickly plummeted in the years of the scandal, and the uproar by the corruption plaguing the Dark Star Bureau eventually led to civil war.[9] In the years after his death, his existence in the bureau became a blemish in the USE's history that was often spoken about.[14] Because of the vast fortune he collected from his corrupt dealings and personal collection of the vessels of sin, he was regarded as the "Collector".[12]

Retrieved from "https://theevilliouschronicles.fandom.com/wiki/Dark_Star_Scandal?oldid=191550"
Community content is available under CC-BY-SA unless otherwise noted.