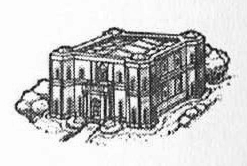 The Conchita Mansion[note 1] was the residence of the Conchita family in Gasto. Built atop the mansion overlooking Gasto, it functioned as the center of the Conchita Territory in the Beelzenian Empire until the apostasy of Duke Banica. The mansion eventually became a ruin by the 6th century EC.

After the death of Duke Gastolle during the Asmodean civil war around EC 212, Duke Tetippea Conchita and his family settled in the mountaintop mansion. The mansion continued to be used by the Conchitas as the family head governed the surrounding Conchita Territory.[1] After the family's sixth head, Duke Muzuri Conchita, was married to Megour Glassred the two began living in the mansion together.[2]

In November of EC 296, the entire household ate a baemu as part of the newborn Banica's birthday celebration. Contracting Gula as a result, one of the staff succumbed to the plague each day. After a week, the mansion was visited by the mage AB-CIR and exchanged his advice to overcome the disease for the red wine glass in Duke Muzuri's possession. The entire household then began endlessly satiating their appetites to ward off the disease.

Once the manor's reserves were depleted, the household struggled to collect food over the course of ten years; during the period, some staff began fleeing the mansion. A famine later struck during the winter of EC 306; the staff began dying off again once per day. In March of that year, Duke Muzuri killed his wife during a struggle for his sword. After the Gula curse ended in May,[2] the ruined Conchita family hired Arte and Pollo to support the surviving Head Chamberlain, Ron Grapple.[1]

In July of EC 323, Arte and Pollo killed Ron after discovering he had taken the red wine glass from their room. The next day, the overweight Banica collapsed and was confined to her bed. Three days later, the duke recovered after forging a contract with the Demon of Gluttony.[3] She later reanimated the mansion's deceased servants, having them guard the manor grounds while she shut herself from the outside world.

Starting in EC 325, Banica began hiring a number of cooks to serve her before having each one killed by her servants for defying her. Later that year, Phantom Thief Platonic attempted to infiltrate the mansion before the thief was caught by Arte and Pollo and forced to escape.[4] Sometime after, the cook Josef was hired by Banica. Several months later, in April, the Beelzenian army surrounded the mansion and was soon after slaughtered by the mansion's undead guards.

Josef later fled the mansion before being retrieved by Arte and Pollo. The cook later made a failed murder-suicide attempt on the duke, dying as a result.[5] After cannibalizing her remaining staff, Banica devoured herself in August of that year. Shortly after, Elluka Clockworker and Platonic infiltrated the estate and investigated the residence before leaving with the red wine glass and Banica's son.[6] Afterwards, the mansion was abandoned and fell into disrepair, becoming a ruin.[7]

In EC 999, the Conchita Mansion was completely decimated by Punishment.[8] Following the end of the Third Period and its subsequent merging with the Hellish Yard, Banica Conchita created an illusion of the mansion for herself and her servants, Hänsel and Gretel.[9]

The personal quarters of Banica Conchita. The room maintained a modified bed to support her immense body weight and several pieces of fine furniture, including a nightstand by her bed.[3]

The servant quarters for Arte and Pollo. It had a hole in the back of the fireplace that could be used to store small objects.[3]

The courtyard surrounding the mansion. It maintained a garden filled with flora. The garden was used by Banica to grow food for her meals.[10]

The room where meals were served in the mansion and guests would be seated. It was furnished with a large table and had several chairs.[11]

The mansion kitchen for the family's meals. Meals for guests, servants, and the members of the Conchita family were prepared in the kitchen by the cooks and servants, taking the necessary ingredients from the mansion's reserves in its food storage.[2]

Pens used to maintain the livestock kept on the mansion's premises. They were large enough to hold a total of around twenty animals.[2]

The basement of the mansion, split into four rooms. One of its rooms was used as a treasury, with the family's valuables being stored within the room. Another portion of the basement was used for food storage.[2]

Retrieved from "https://theevilliouschronicles.fandom.com/wiki/Conchita_Mansion?oldid=189361"
Community content is available under CC-BY-SA unless otherwise noted.