The Evillious Chronicles Wiki
Register
Don't have an account?
Sign In
Advertisement
in: Books, Manga, The Daughter of Evil,
and 4 more
English 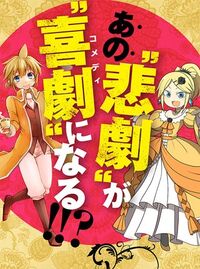 The Comedy of Evil Project[note 1] is a project dedicated to expanding upon events from The Daughter of Evil Series in a satirical nature. It is composed of two serial manga adaptations with their first chapters released April 24, 2013. The manga portray the characters or events of the series through a humorous or exaggerated lens, satirizing events of the novels or the characters themselves. It has since ended circulation with its final chapters releasing on December 24, 2014.

The Servant of Evil ~Opera Buffa!~[]

Allen in The Servant of Evil ~Opera Buffa!~

Advertisement for the Comedy of Evil Project