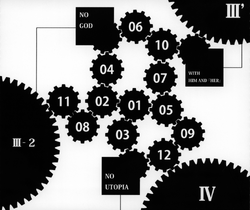 The Clockwork Lullaby Series[note 1] is a series of Vocaloid songs conceptualized and developed by Akuno-P. It belongs to mothy's larger Evillious Chronicles. Including some of his earliest songs, it is one of the music producer's oldest series and has since developed as a bridge between mothy's other series as well as elaborating upon the later event's in his story. Like its name, it is recognized for incorporating the "Clockwork Lullaby" into each song.

The series is set in Bolganio, a fictional continent in the series' world, with all of its major actions taking place in its western region, Evillious. The majority of the known storyline occurs throughout the final few decades of the EC 900s. However, several parts of the story occur during a currently unknown location and time.

A spell song that can be learned by those with an affinity for magic and singing voice. A practitioner who sings the distinctive, calming melody ("Lu Li La" or an arrangement of the pattern) is able to spread their voice across a large area. The spell can be used as a type of exploration magic, such as detecting and locating the vessels of sin.[1]

Special music boxes created by Kiril Clockworker following the Levianta Catastrophe. They could turn gears of "karma" and reveal information about certain events,[2] even those occurring in the future.[3] They could also be connected to a Black Box system, with some requiring the assistance of a god to be completed.[4]

The series has fifteen songs, thirteen of which are labeled as a "Clockwork Lullaby" from "Zero" to "12"[5] and the other two labeled as "A" and "R"[6]. Although not reaching the same amount of popularity as some of his other series, the Clockwork Lullaby songs became important for fans of Akuno-P's larger Evillious Chronicles due to their connections to the characters or events of his other series. As the years progressed, a series of albums featuring the characters from some of the later songs were released. The booklets included with these albums developed the story and many of the characters featured in them.

As part of the Seven Crimes and Punishments album, a 150 page prose was written by Akuno-P and included in the limited edition version of the album. Like the Deadly Sins of Evil and The Daughter of Evil light novel series preceding it, the story expanded upon the characters featured or mentioned in the original song PV, as well as adding new characters and plot details. The story was illustrated by Ichika.

A yonkoma manga was included with the limited edition purchase of Seven Crimes and Punishments album from Animate, released on February 25, 2015. The manga was illustrated by Tamara. It portrayed Sickle gathering up the contractors with Allen to pose for the cover of the two different versions of the album.

Master of the Hellish Yard