"Such a thing, it wasn’t necessary for making it."
―Album description[src]

Clockwork Lullaby is an album released by Akuno-P on August 16, 2015. It was first distributed at Comic Market 94 and features twelve songs from the Clockwork Lullaby Series. The album's jacket was illustrated by Ichika. 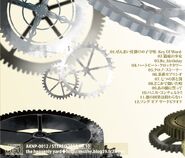