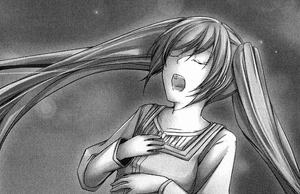 The Clockwork Lullaby[note 1] was a spell song used to detect magical power. Existing with twelve variants, one of its application was as a type of detection magic.

The spell song's tune was arranged in a distinctive "Lu Li La" pattern sung in a soothing melody. It also had twelve variants; one variant allowed the singer to pinpoint locations that contained large amounts of magic power over a wide area by echoing the sound across the area like a radar. In this variation, caster could also differentiate between types of magic detected, such as demonic presences.[1] Another variation existed that allowed the user to "seal" a target's actions.[2] The melody was also described as relaxing and healing for the heart.[3] Being quite versatile, the Clockwork Lullaby allowed for users to rearrange its lyrics and melody or add words to the song, presumably changing its effects.[4]

Hänsel and Gretel singing the lullaby in Heartbeat Clocktower

Michaela singing the Clockwork Lullaby in The Daughter of Evil: Wiegenlied of Green
Add a photo to this gallery

Retrieved from "https://theevilliouschronicles.fandom.com/wiki/Clockwork_Lullaby?oldid=192630"
Community content is available under CC-BY-SA unless otherwise noted.