"She's a Netsuma! The whole village hates her."
―Chelsea regarding Clarith[src]

Chelsea was a villager from Yatski in the Kingdom of Elphegort and a neighbor to Clarith. Despising the Netsuma like the rest of her village, Chelsea bullied the girl for her white hair and inferior work. She later lashed out at the girl when she was getting attention from the chief's son, Ayn.

Chelsea was born in Yatski, Elphegort during the 5th century EC, growing up and making numerous friends among her fellow villagers, becoming close friends with Alma and Barbara in particular. Like the rest of the village, Chelsea discriminated against the resident Netsuma, Clarith, repeatedly bullying her and scorning her.[1] When she came of age, she began helping her family tend to the fields and; over time, she developed a crush on the village chief's son, Ayn.[1]

"What're you saying? I'm not going to eat with a filthy Netsuma."
―Chelsea[src]

One day in EC 499, while working in the fields, Chelsea saw Clarith working slowly and pushed the Netsuma as she passed by. Several weeks later, while she was speaking with Alma, Clarith approached Chelsea and invited her to dinner. Offended, Chelsea scorned the invitation.[2]

Over a month later she saw a new, beautiful Elphe girl, Michaela, start helping with the farm work and learned she was living with Clarith. During the next few months, Chelsea got on friendly terms with Michaela, taking a break with her one day that summer and thanking her for the hard work she'd been doing for the village. During the conversation, the two fell to discussing Clarith and Chelsea made clear the entire village's hatred for the Netsuma girl. Later that day, Chelsea saw Ayn approach Clarith on her way home from work and watched the two converse; growing envious, the peasant suspected Clarith was also after his affection.

With Alma and Barbara, Chelsea confronted Clarith just as she and Michaela were returning back home; demanding to speak with the Netsuma, Chelsea dragged her around to the back of the house. There, she interrogated her over her feelings towards Ayn and forbid Clarith from speaking to him. Infuriated by Clarith's hesitance, she prepared to slap her before Michaela intervened. After arguing with Michaela briefly, Chelsea gave up and she left with her friends.

Several months later, Chelsea approached Clarith when she was alone and suggested to her that Michaela only treated her nicely to make herself look better, saying her friend remained by her side to simply make her own beauty stand out more. Succeeding in damaging Clarith's faith in Michaela, she left.[1] During the Green Hunting in EC 500, Chelsea and the others were attacked by the invading Lucifenian army. After the Elphegortean military unit stationed at the village was overwhelmed, Chelsea and the other female villagers were slaughtered.[3]

Following her death, Chelsea's corpse was piled and counted by the Lucifenian forces there before the army continued their push north. Shortly after, Michaela and Clarith discovered Chelsea's body among the piles of corpses left in the pillaged village after they returned to Yatski.[3] Years later, Clarith recounted the hardships she faced in her homeland prior to becoming a nun in her autobiography.[4]

"But your help's saved us some trouble."
"Really? That's good. Oh, you should tell Clarith that too. I'm sure she'd be glad—"
"Clarith doesn't need it, does she? Her work's slow; she's unsociable. And besides, I'm not going to thank someone from the Netsuma Clan."
―Chelsea and Michaela[src]

Chelsea was a self-absorbed young woman and a nasty bully to her enemies. Typically, Chelsea had a friendly demeanor with her fellow Elphe villagers, even newly arrived Elphe travelers staying in the area. She commonly kept her two close friends by her side as her personal posse as well. She also entertained romantic feelings for the chief's son, Ayn, and was protective of him getting close to Clarith.[1]

Like her fellow villagers, Chelsea had a deep-rooted prejudice against foreigners, especially the local Netsuma girl Clarith. As a result, she treated the girl poorly and looked down upon her with disdain. Her disgust for the Netsuma was amplified by Clarith's seemingly slow and sloppy field work, which Chelsea cited as added justification for her mistreatment. She became easily annoyed by the woman's stuttering as well and had no issue abusing the woman both physically and emotionally for even trying to befriend her.[2]

While cautious of her friendly demeanor regarding the Netsuma, Chelsea had gotten along with Michaela and sympathized with her situation of having to live with Clarith. But, after being physically obstructed by the girl, Chelsea extended her spite towards Michaela as well and had no issue telling Clarith lies to ruin their relationship and further put her down.[2]

As a villager of Yatski, Chelsea was a capable field worker and helped out adequately with her peasant duties.[2] While prone to violence, the woman lacked any actual combat skills and was somewhat easy to restrain or overpower. She was skilled in manipulation to a degree, particularly with personal relationships. However, she lacked much tact, making her underlying motives simple for most to recognize.[1]

Ayn: Chelsea's crush. Chelsea harbored affection for the man despite his being the son of the greedy chieftain. Due to this, she would be enraged when seeing him give affection to another girl, particularly her hated neighbor, Clarith.

Clarith: Chelsea's neighbor. As a Netsuma, Chelsea despised Clarith and would treat her cruelly along with the other villagers, resentful of the girl being allowed to live in the village despite her race and fed up with her clumsy work in the fields. Seeing the Netsuma get her beloved Ayn's attention, Chelsea became envious of Clarith as well, seeking even more to make her miserable.

Michaela: A fellow villager. Finding her kind, beautiful and hard-working, Chelsea initially grew to have an amicable relationship with Michaela over the time she lived in Yatski. Despite this, she was perplexed by her insistence on being friendly to Clarith. After Michaela intervened in her bullying, Chelsea grew spiteful towards her and sought to ensure Clarith didn't enjoy their friendship. 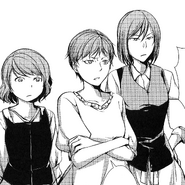 Chelsea as she appears in The Daughter of Evil manga 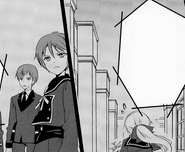 Retrieved from "https://theevilliouschronicles.fandom.com/wiki/Chelsea?oldid=192446"
Community content is available under CC-BY-SA unless otherwise noted.