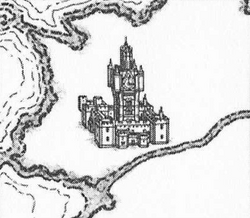 Castle Hedgehog,[1] otherwise known as Castle of Hedgehog, was a fortress located in the western area of Blood Pool in Marlon. Originally serving as the residence for Lord Hedgehog of Lioness, it became the royal villa for the Marlon Royal Family after the Blue Country conquered the region and later a major prison facility for the World Police.

Sometime after the foundation of Lioness, the castle served as a residence and prison keep for the nation. A facility was built twelve floors beneath the main castle as a storage facility for numerous Leviantan relics,[2] being one of the two labs that led to the Grave Yard.[3] Around the end of the first century EC, the Zorach Family began guarding the underground facility, protecting it for generations.[4] Around the third century EC, Lord Hedgehog used his fortress to detain political prisoners during their war with the Kingdom of Marlon for control of the Marlon Island,[5] torturing them within the castle for his own amusement.[6]

Around that same time, AB-CIR came into the lord's service and resided in the castle. Around EC 325, Prince Carlos Marlon was imprisoned in the castle.[7] Shortly after, he made a deal with the court mage, agreeing to act as a spy in return for his freedom.[8] At some point, Marlon won the war with Lioness and annexed the latter country's territory, including the castle.[9] The Marlon Royal Family then briefly used the castle as a royal villa before leaving due to noise from the clock tower.[10]

Some time after EC 474, Queen Prim Marlon began to take up residence in Castle Hedgehog to rest from the royal palace. In EC 505, Prim retreated to the keep with the Espionage Task Force, claiming to be recovering from poor health; there, she commanded Commander Ney to use the Glass of Conchita to build up a reanimated army with those dying of the Gula plague throughout the Blood Pool region.[11]

Later that year, King Kyle assaulted the castle and army with troops from the Marlon Castle garrison. Once the soldiers breached the castle's defences, Kyle, Germaine Avadonia, and a number of troops hunted Ney throughout the castle before being ambushed by the Espionage Task Force's assassination squad. Kyle escaped the battle and ascended Heartbeat Clocktower to confront his mother.

During their exchange, Ney killed her mother in a fit of madness before attacking Kyle. As the fight continued, the undead troops collapsed due to the concentration of Gluttony magic surrounding Ney. Once the task force commander was subdued, she and Prim were carried out of the castle while some of the first army stayed behind to handle the clean up after the battle.[12] It was abandoned afterward.

Following the establishment of the World Police in EC 573, the Freezis Foundation purchased the castle property and offered it to the new police organization. Castle Hedgehog was then converted into a prison facility and the Interrogation Execution Department was stationed there. Over the years, numerous criminals were transferred to the facility and subjected to all kinds of abuses by the Torture Department to produce helpful statements for the World Police.[13] On January 30, EC 611, the Zorachs shut down the Freezis facility and abandoned the room to sink into the ground, eventually destroyed by the molten lava below.[14]

In EC 999, Castle Hedgehog was completely decimated by Punishment. Following the end of the Third Period, the destruction site merged with the Hellish Yard along with the rest of the ground world.[15]

A tall clock tower at the center of the castle. It had a room at the top of the spire; due to the tower's design, its ringing could be heard as far as the main gates but not from inside the room closest to it.[16] It became the personal refuge of Queen Dowager Prim towards the end of her life.[17]

A reception hall used for dinner parties and designed to hold a large amount of guests. It became a major battleground between the corpse soldiers and the Marlon army.[18]

A courtyard in Castle Hedgehog. It connected most rooms to the rest of the castle, including the staircase leading to Heartbeat Clocktower. It was used as an ambush location by the Espionage Task Force.[19]

An underground area where political prisoners were kept. It was also used to hold detainees for Lord Hedgehog's routine torture sessions.[20]

A room located twelve floors below Castle Hedgehog that provided access to the Grave Yard.[21] The room was used to store numerous Leviantan relics, including five Freezis devices containing ghoul children, and became the main residence for the Zorach family. The room constantly emanated a freezing air due to the Freezises. The facility was late abandoned and destroyed by the world's mantle lava after the Freezis pods were shut down.[22]

Retrieved from "https://theevilliouschronicles.fandom.com/wiki/Castle_Hedgehog?oldid=178732"
Community content is available under CC-BY-SA unless otherwise noted.