The Evillious Chronicles Wiki
Register
Don't have an account?
Sign In
Advertisement
in: Groups, Families, Calgaround Family,
and 5 more
English 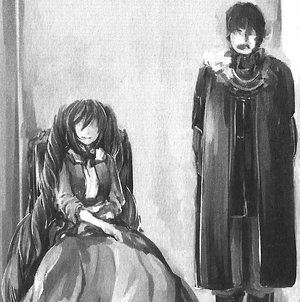 The Calgaround Family[note 1] was a noble family of the Kingdom of Elphegort, governing Calgaround as Earls. The family presided over the town for centuries before being replaced by elected mayors.

Sometime before the EC 140s, the Calgaround family settled in Calgaround, Elphegort and presided as earls over the area. In EC 147, Gilbert Calgaround married the famed florist Mikulia Greeonio. Four years later, Countess Mikulia poisoned the Earl with Gift and eventually disappeared from the public. The family continued governing the town afterward.

Sometime during the early EC 300s, the daughter of the reigning earl fled from her home, becoming known as the infamous Phantom Thief Platonic. Her father immediately posted a reward for any information regarding her whereabouts. The thief eventually returned home and was accepted back into the family. Sometime toward the end of the 6th century EC, the government reformed and the family's heads were replaced by elected mayors.[1]

After the destruction of the Third Period, all the dead members of the Calgaround family residing in the Heavenly Yard were dragged back down to the earth as the ground world merged with the Hellish Yard.[2]