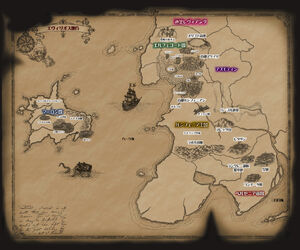 Bolganio[note 1] was a continent in the Third Period. Many events involving the vessels of sin took place in its western region, Evillious, and the continent was populated by numerous kinds of humans of varying ethnicities and cultures throughout its history.

After arriving at the new planet, the crew of the Climb One established the Bolganio continent and all the humans in it, constructing different races to fill the different lands. By BT 528, two crewmembers Levia and Behemo were trapped with several of their colleagues in soul form aboard the Climb One following the ship crashing, the ship becoming buried deep in Evillious' north. It would later be excavated and worshiped by the humans there as the ark "Sin", containing the "dragon gods" Levia-Behemo. In the meantime, another crewmember became the earth god, transforming into a tree in the center of Evillious, and another became the sun god in the form of a bat.[1]

The Akuna region developed into a collection of kingdoms,[2] Jamataikoku founded on the Jakoku archipelago. Meanwhile, the Evillious region formed several large sovereign powers, mainly the Magic Kingdom Levianta and the Tasan Empire. Worshiping Levia-Behemo, the Magic Kingdom founded Levin and spread the religion across the area; the southern region later broke off as Heldogort and was subsequently persecuted for its worship of Held until it became the Kingdom of Elphegort.[3] Following the Jamataikoku's collapse, many Netsuma immigrated to Evillious while Jakoku began going through constantly changing government.[4]

On December 27, EC 0, Levianta established the Evillious Calendar system following the birth of Hänsel and Gretel as part of Project 'Ma'.[5] Later on, in EC 013, the technology inside the Sin ark exploded, freeing Levia-Behemo and resulting in the total destruction of the Magic Kingdom.[6] In EC 014, Hänsel and Gretel created the vessels of sin and scattered them across the continent.[7] Early in the first century EC, the Tasan Empire collapsed into its individual vassal states, Re Tasan and Ra Tasan.[8] Around that same time, the Li Family founded the Kingdom of Mukoku in Akuna.[9]

Afterward, the Beelzenian Empire was founded and began conquering the southern territories, including Re Tasan and Ra Tasan;[8] the empire eventually encompassed two-thirds of Evillious.[10] Early in the second century EC, Akuna kingdoms bordering Beelzenia began invading the vast empire. Beelzenia's Asmodean province later declared independence in EC 212.[11] "Holy Levianta" was later reestablished as the religious capital of the Levin Church in EC 301.[12] Around that time, the Kingdom of Mukoku collapsed.[13]

Following a war with Asmodean during much of the 4th century EC, the Empire's Lucifenia province also declared independence in EC 399.[14] During the early EC 470s, the Kingdom of Lucifenia invaded both Asmodean and Beelzenia, increasing its territory and securing itself as the new dominant power in Evillious.[15] Following Lucifenia's quick decline and subsequent occupation by the Kingdom of Marlon in EC 500, island nation annexed the territory and later briefly warred with Beelzenia and Asmodean in EC 505.

In EC 508, Holy Levianta petitioned for the Evillious nation's support against the local terrorism caused by Neo Apocalypse and Lucifenia answered the call to aid. Marlon later fully reinstated  Lucifenia's sovereignty in EC 510 and the nation reorganized itself into a republic.[16]

In EC 592, the Freezis Foundation discovered the Maistia continent and the Evillious nations colonized it for trade.[17] International concern later rose over the epidemic plaguing Toragay, Elphegort in fall of EC 609.[18] With the discovery of a cure later that year, tensions declined soon after.[19] Marlon's Maistian colonies later rebelled in EC 760, establishing their independence as the United States of Maistia in EC 776.[20] In EC 852, the USM sent a fleet to Jakoku, forcing the country to lift its nation-wide trade restrictions.[4]

Levianta, Lucifenia, Marlon, and Elphegort later signed the Aishikeru Treaty in EC 878, joining together as the Union State of Evillious.[11] Later on, strange phenomena began happening all over the world.[21] In EC 982, a war broke out across Evillious, lasting for months; in August of the following year, Levianta fell into civil war before the riots were put down by USE authorities.[22]

In EC 993,[20] Elphegort invaded Lucifenia and was expelled from the USE. Backed by Beelzenia and Jakoku, the nation entered a war with the USE's remaining Marlon and Levianta. After the neutral United States of Maistia announced their support for the USE, Jakoku declared war on the nation and Bolganio's war spread across the entire globe.[23]

Five years later, Elphegort set up countless Punishment weapons across the Evillious region. Not long after accidentally destroying Jakoku's Onigashima with the weapon, the Punishments set up on Evillious were activated and eradicated the region, decimating the entire continent in EC 999.[24] Following the end of the Third Period, the destruction site merged with the Hellish Yard along with the rest of the ground world.[25]

The Evillious region encompassed the entire western half of the continent, covering a variety of different landscapes including its western, more temperate grasslands and its eastern, more arid drylands.[26] Following the initial success of the second Project 'Ma', the region grew to adopt the Evillious Calendar as its point of reference and continued to use it during the 10th century EC.[5]

After the Levianta Catastrophe, it lost much of its magical and technological advancements made during the reign of the Magic Kingdom and magic slowly degraded into myth by the early EC 500s. Levin was the primary faith of the area's populace.[14] For the most part, Evillious was disconnected from the eastern region, showing no signs of constant contact or trade between the two regions,[27] outside of the nearby cities along the border.[28]

The Akuna region encompassed the areas east of the Evillious region and took up much of continent's eastern half. It was known to have been comprised of several different kingdoms during the 6th century EC and was largely undocumented and unexplored to residents of Evillious.[27]

Retrieved from "https://theevilliouschronicles.fandom.com/wiki/Bolganio?oldid=189140"
Community content is available under CC-BY-SA unless otherwise noted.