The Evillious Chronicles Wiki
Register
Don't have an account?
Sign In
Advertisement
in: Magic, Items, Magic Tools,
and 7 more
English

Late during the Second Period's history, the "Type E" Black Box was developed by multiple scientists, including Seth Twiright. Held Yggdra used the box to develop the "Mind" Swap Technique, which was used to study extreme cases of abnormal mental behavior.[1] Not long after, Seth developed the "Type S" Black Box, which could transfer one's spirit data to and from special spaces, including parallel worlds. Multiple Black Boxes of various designs and usages were created aboard the ship the Climb One. Among them, Levia Barisol developed the "Type L" Black Box which could move spirit data into different bodies, creating the "Body" Swap Technique and reincarnation.

Before the start of the Third Period, TALOS set his own Black Box to record information about the Third Period following its beginning around BT 528.[5] During the early centuries of Evillious' development, Seth redesigned a much smaller Type S Black Box that was only able to pull individuals into theirs or someone else's inner spirit worlds.[2]

While their spirits were trapped aboard the Climb One, Levia and Behemo eventually plotted to trick Kiril Clockworker into using the Type L Black Box to swap their spirits into their two-headed dragon body. Upon doing this, however, the Black Box malfunctioned from a combination of damage and misuse and exploded, but not before transferring them into the corpse of Elluka Chirclatia instead.[3] Sometime after the death of Allen Avadonia on December 26, EC 500, TALOS, having become the sun god "Sickle", placed the boy's spirit inside Black Box and left it there in the fields of the Heavenly Yard.[5]

Allen resided inside while learning about the ground world's history and mechanics as instructed.[6] He later, with Sickle's permission, used the Black Box to appear on the ground world and interfere in the Third Period to protect his sister from Clarith, and then helped Yukina Freezis and Germaine Avadonia during their battle with Irina Clockworker. After Allen returned, he grew tired from the numerous visits and slept inside of it, being observed by Held and later Sickle during this time.[5] During the Duel of Merrigod Plateau, Irina used Black Box Type S to take herself, Gumillia, Eve Moonlit, Behemo, and Levia into Levia's inner spirit world to force her to confront her true identity.[7]

Meanwhile, Allen continued to absorb information from Black Box over the centuries. On January 30, EC 611, Behemo communicated with Allen via the Black Box's microphone and directed him to unlock the box via the emergency encryption protocol. Afterward, Behemo used the box to quickly review the Third Period's history and then instruct the Zorach Family to kill the ghoul children under Castle Hedgehog. Allen was later returned to the box and continued his studies.[8]

In EC 999, Allen leave Black Box to return to ground world, bring Nemesis Sudou's body to spirit of Levia,[1] who, denying reality, had constructed around herself an illusion of Held's old clinic in the Second Period, complete with a Type E Black Box. After she used the Black Box to review Nemesis' memories, Allen input an "irregular system" in it that forcibly restored to Levia all of her memories of the Third Period.[3] In EC 1000, several Black Boxes were sent out by the Tasan Party, floating around the destruction site of the Third Period, sucking in souls and reformatting them in a "purification" process before two were destroyed by Nemesis and Eater Sabella.[9]

Unless designed to be smaller, the typical Black Box was large enough to hold at least one individual within its space, if not more.[1] The original Black Box was outfitted with the ability to let one individual peer into another's memories, provided that the user was skilled or that both individuals were hooked up inside the box. Seth's modifications allowed the Black Box to transfer spirit data to and from different areas,[2] while Levia improved on this function until it could effectively reincarnate spirits into new bodies or even new forms.[3] Later modifications outfitted the Black Box with an Akashic Recorder to record and review spirits' memories,[2] and some could send messages to recipient machines.

Most of the Black Box's functions were activated by flipping specific switches inside the box. Black Boxes with an akashic recorder were also outfitted with a learning device that could be connected to a user's head, transferring the information directly into their mind at adjustable speeds of information flow. The Black Box could also include emergency protocols for a user inside to escape by inputting the correct password, opening the device.[8] They could conversely be secured or unlocked with a golden key fitting into a keyhole on the side.[5]

A wireless microphone was also stored within Black Box's exterior and could be accessed via a switch hidden at the bottom of the device. The microphone functioned as a transmitter for communication with the inside of the box; it also functioned as speaker for the user to hear anyone inside the device.[8] Black Box's individual functions could be locked by the owner so that only certain kinds of beings or specific individuals could use them.[3] This aside, usage of the Black Box was on its own difficult and required individuals of particular skill and abilities.[1]

Type E[note 5] was the original Black Box.[2] Developed by Seth Twiright, among others, it functioned as a research tool; with Held's contribution, it specifically enacted the "Mind Swap Technique" which allowed users to peer into the mind and memories of a separate individual.

Users were typically required to both be hooked up to and inside the black box during its use, necessitating it be big enough to house two people.[1] It could malfunction or overheat from excessive use, requiring thirty minute cool-down periods,[10] and could only be used at a maximum of an hour at a time before risking damage to the psyches of the users.[1]

The Black Box Type S[note 6][note 7] was Seth's variation on the Black Box. Type S was capable of sending spirit data into special spaces, including parallel worlds; conversely, it could pull in spirits from alternate universes as well,[2] and was created by Seth to definitively prove the existence of parallel worlds.[1]

Type L[note 8] was Levia's variation of the Black Box installed on the Climb One. Able to manipulate spirit data, Type L allowed for reincarnation and the transference of souls into new bodies known as the "Body Swap Technique", among other functions.[2] The reincarnation feature could be used to turn someone's spirit data into a human, a forest spirit, or even a god. The box could only be used with the consensus of the whole Climb One crew, and additionally could only be used by the crew or someone with the DNA of a crewmember. It was capable of malfunctioning or even exploding if misused.[3]

A redesigned version of Seth's Type S variant. The new Type S was severely limited compared to its original design, only capable of moving spirit data into someone's inner spirit world.[2] It was also considerably smaller, able to fit into a small stuffed cat body. The device, on at least one occasion, worked by exploding and pulling all of the individuals caught in the blast into one individual's inner spirit world. When the Black Box is activated, a "Lu Li La" melody is played.[7]

A type of black box that was utilized by Sickle in the Heavenly Yard and by other earthlings elsewhere.[8] The box was outfitted with an Akashic Recorder that collected the memory data of souls in the Heavenly Yard,[3] which could then be reviewed at varying speeds by an individual contained within the large box. It was similarly outfitted with a microphone function for communication between those outside and inside of the box, and carried emergency protocols for allowing someone contained in the box to escape.[8] This variant was also able to send spirits across vast distances,[6] as well as sending messages to recipient devices.[8]

The Black Box Type X[note 9] was a type of Black Box utilized by the Tasan Party at the world's end. It had the ability to suck in souls and "reformat" them, removing all their memories for them to be reborn as completely new beings.[11]

Type B[note 10] was a type of Black Box developed by Behemo Barisol. It could also be fitted with an akashic recorder.[12]

Type H[note 11] was a type of Black Box, presumably developed by Luna Hazuki. According to TALOS, it functioned as a virtual reality engine.[13]

The Neo Black Box[note 12] was a type of Black Box created by Seth Twiright. Resulting from his continued research into parallel worlds, it could bring users into other worlds. Seth's model was given to Banica Conchita for testing, and was outfitted in the rebuilt Evil's Theater II. Banica then used it to travel to another world in pursuit of food.[14]

The Black Box as it appears in Re_birthday's new PV

Nemesis holding a Black Box in the story

A Black Box in Deadly Sins of Evil: Master of the Heavenly Yard 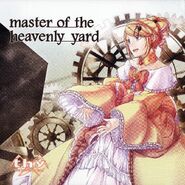 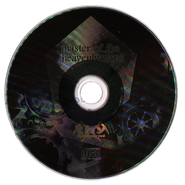 The Black Box in the album CD

Two Black Boxes in the clearfile of Evils Extra