The Evillious Chronicles Wiki
Register
Don't have an account?
Sign In
Advertisement
in: Groups, Families, Avadonia Family,
and 9 more
English 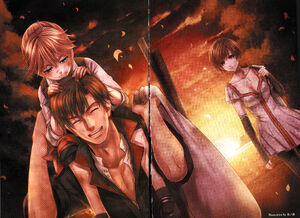 The Avadonia Family[note 1] was a family of swordsmen in the Kingdom of Lucifenia. One of its most prominent members, Leonhart Avadonia, became famous as one of the Yellow Country's Three Heroes.

On January 15, EC 462,[1] Leonhart Avadonia was born into the family in Beelzenia, eventually defecting to the Lucifenian military and killing his pursuing younger brother in an ambush. He eventually became the Captain of the Royal Guard for the Lucifenian Royal Family around EC 475. Serving King Arth I, he participated in the Kingdom of Lucifenia's conquest of Beelzenia and Asmodean. In EC 482,[1] Leonhart kidnapped an infant from the Beelzenian Imperial Family after slaughtering her family during the Beelzenian campaign, naming her Germaine. After several years he adopted the girl instead.[2] In EC 490, Leonhart was highly regarded as one of the kingdom's Three Heroes,[3] though refusing noble status.[4]

In EC 491, Leonhart adopted Prince Alexiel Lucifen d'Autriche after a failed assassination attempt on the child.[5]Taking up the name Allen,[6] the former prince later became Princess Riliane's chamberlain in January of EC 499. In EC 500, Allen was secretly ordered to kill his foster father by Riliane and assassinated the knight two days later.[7] Afterward, Germaine founded the Lucifenian Resistance in opposition of Riliane's tyrannical regime and sparked a revolution in November.[8]

Disguised as Riliane, Allen was captured by the revolutionaries during their assault on the royal palace on December 19 and subsequently executed in Milanais Square on December 26.[9] After wandering the Evillious region for years, Germaine joined the Beelzenian army's Langley Unit in EC 504. During Beelzenia's war with Marlon, Germaine left the army and served as a bodyguard to Gumillia until defeating Abyss I.R. on the Lucifenian coastline and returning to her travels.

While assisting in the New Four Horsemen Incident in EC 508, Germaine was possessed by Abyss I.R. and used as her medium.[10] She was later freed from the mage's control on January 30, EC 611. The swordswoman died of rapid aging over two months later.[11]

After the destruction of the Third Period, all the dead members of the Avadonia family residing in the Heavenly Yard were dragged back down to the earth as the ground world merged with the Hellish Yard, excluding Allen.[12] Leonhart, Germaine, and Allen later attended Riliane's banquet at the Lucifenian Royal Palace before the Eighth Gift swept by.[13]