The Evillious Chronicles Wiki
Register
Don't have an account?
Sign In
Advertisement
in: Groups, Organizations, Apocalypse,
and 8 more
English 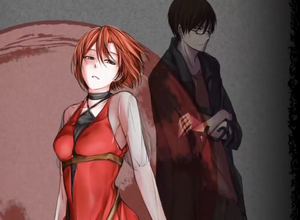 Apocalypse[note 1] was a criminal and anti-government organization established in the Magic Kingdom Levianta. Led by Pale Noël, the organization enacted numerous destructive acts across Levianta, leaving bloodshed and chaos in its wake.

Several years before EC 0, Apocalypse was an organization established by Raiou Zvezda in the Magic Kingdom Levianta. Once Raiou quit the organization, leadership of it was taken over by the ghoul child Pale Noël.[1] Based in Calgaround, the organization committed numerous crimes and acts of murder to push their agenda of resisting the Leviantan government,[2] the organization having a philosophy of being against all rules and regulations. Around BT 002, Meta Salmhofer joined the organization as well after being rescued by Pale.[3]

Following the pronouncement of Project 'Ma', Apocalypse slaughtered nearly all of the scientists of the Leviantan Royal Institute when they led an expedition to capture Meta as a potential project candidate. They were also responsible for the destruction of the village of Nemu.[4] During this period, Raisa Netsuma and Yegor Asayev were both admitted into the organization's ranks, responsible for various attacks in the southern and western regions of the magic kingdom respectively. Following Gammon Loop Octopus's political upheaval after the first project's failure, the Leviantan government began cracking down hard on the organization.[3]

Around BT 001, Yegor Asayev betrayed Apocalypse in exchanged for amnesty for his crimes. As a result Meta, Pale, and Raisa were all captured, and Raisa died attempting to escape captivity.[3] Meta was sentenced to execution before joining Project 'Ma' and receiving a pardon.[5] After she fled in EC 0 and left both the organization and the Magic Kingdom behind,[6] Apocalypse continued to remain active. In the succeeding years, the group succeeded in murdering the fourth candidate for the Project. The organization was eventually disbanded sometime after.[7]

Pale's tomb at Merrigod Plateau after his apparent death was later dubbed "Apocalypse Cliff" for the organization he had lead.[8] Apocalypse itself remained infamous in history, recognized for the terror it brought the Magic Kingdom Levianta. Around 500 years later, a descendant of Yegor, Mikhail Asayev,[9] founded a political organization in opposition to the later established Levin Church along with cult followers of Meta.

Naming it "Neo Apocalypse", the organization committed numerous terrorist attacks throughout Holy Levianta before being disbanded. Nearly a century since Neo Apocalypse was put down,[10] Julia Abelard founded her own criminal organization, dubbing it "Père Noël" in reference to Pale.[8] The organization's second member, Mayrana Blossom, chose the codename "Fourth Shadow" in reverence to Meta.[11]

Apocalypse was led by four ranked members known as the Four Horsemen.[10] Said Four Horsemen members maintained codenames and led separate armies in their respective corners of the Magic Kingdom Levianta. In addition to their base in Calgaround, the organization also had a base in the north before it was captured by the Royal Capital Army.[3]