The Evillious Chronicles Wiki
Register
Don't have an account?
Sign In
Advertisement
in: Books, Manga, The Daughter of Evil,
and 3 more
English

Aku Musu (1) is the first volume for the manga series of the same name, released on February 27, 2014. The volume contains the first seven chapters of the manga series that were serialized in Blitz G's Comics monthly issues. It is part of the Comedy of Evil Project and was illustrated by Ken.

This section is currently incomplete; we apologize for this inconvenience.

This section is currently incomplete; we apologize for this inconvenience.

Riliane's maniacal planning while Chartette causes trouble for the other servants

Germaine alone at home while chaos exudes at the palace

A sketch of Riliane by Ken

Riliane in the artist comments

Sample promotional illustration for the manga

Advertisement for the volume 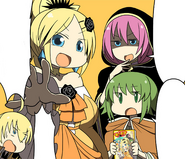 Promotional comic for the manga by Ken

Akumusu rare card for the volume

The page listing the contents of the manga

A map of the Evillious region