Aile Freezis was an aristocrat of the Kingdom of Marlon and the youngest child of Keel and Mikina Freezis. Coddled for her ill health, the Freezis daughter eventually married another noble and lived in comfort for much of her life.

Born in the Kingdom of Elphegort in EC 495, Aile lived at the Freezis Mansion with her family and developed an ill disposition, requiring her mother Mikina's constant care. During the Green Hunting, Aile fled with her family from the mansion but they were captured by the Lucifenian army soon after and imprisoned at the royal palace. After being freed, the five-year-old resided at Corpa's mansion in Rolled for a time before traveling to the Freezis mansion in Marlon. When Elluka Clockworker and Gumillia hid from Lucifenia at the mansion later that year, Aile and her siblings played with the mages.[1]

After Aile's sister, Yukina, ran away from home to research The Daughter of Evil, Aile helped her brother Shaw comfort Keel as their father became wracked with grief.[2] In EC 505, Yukina returned and Aile received news of her big sister's arrival. She excitedly went to greet Yukina before suffering from the exertion and needing to be tended to by Mikina. Later Aile ate with her family and Yukina's new friends at the mansion; like everyone else, she was disturbed by Germaine Avadonia's drunken ramblings about all the trouble Yukina had gotten into.[3]

Following the battle for Castle Hedgehog, Aile grew up and eventually married a Marlon aristocrat and lived a comfortable life with him. Once Shaw tracked down their mother, Aile and her siblings rushed to Mikina's side just before her death.[4] She also, at some point, had at least one child;[5] Aile then passed away later that century.[6]

Aile's lineage eventually led to her granddaughter, Aai Freezis, who would eventually succeed her great-uncle Shaw's role as the president of the expansive Freezis Foundation in November of EC 609. The foundation under Aai's guidance would oversee the trade market and development of Maistia.[7]

Aile was a bubbly and energetic girl despite her sickliness and acted very sporadic when excited. Nurtured heavily by Mikina since she was a baby, Aile loved her parents very much. Likewise, she shared a good relationship with her elder brother and sister and was happy to have them around, ecstatic to see Yukina again after she returned from her long trip abroad.[3] Having grown up in an aristocratic household, Aile demonstrated a similar curiosity as her sister, wanting to travel and see other rich places even after death.

Born sickly, Aile often had coughing fits when expelling too much energy within a short period of time. As a result, the child lacked much athleticism and was in need of constant care and supervision. Being a daughter of the Freezis Family and a noble's wife, Aile had a great amount of influence and wealth at her disposal.[3]

Mikina Freezis: Aile's mother. Aile was close with her mother and loved her as her primary caretaker over the servants in the house. Often coddled by Mikina due to her ill health, Aile was usually obedient to her and in turned cared about her mother, rushing to her side when she was on her death bed in later years.

Yukina Freezis: Aile's older sister. Aile cared deeply about her sister and was happy spending time with her, missing Yukina while she was off exploring the world and rushing to her side despite her weak state of health. Similarly, she became upset to hear of the danger her older sister experienced.

Keel Freezis: Aile's father. Aile loved her father and would try to cheer him up when upset, such as after Yukina ran away.

Shaw Freezis: Aile's older brother. Aile held a close relationship with Shaw as her older brother and worked in tandem with him in things such as comforting their father. 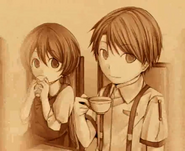 Aile in Handbeat Clocktower
Add a photo to this gallery

Aile with her siblings in The Daughter of Evil: Praefacio of Blue
Add a photo to this gallery 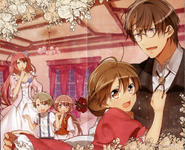 The Freezis family as seen in the The Daughter of Evil: Praeludium of Red preview
Add a photo to this gallery

Retrieved from "https://theevilliouschronicles.fandom.com/wiki/Aile_Freezis?oldid=189226"
Community content is available under CC-BY-SA unless otherwise noted.