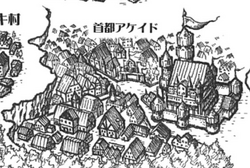 Aceid[note 1] was the capital city of Elphegort. Divided into five districts, each with its own purpose, the city was the site of the royal palace for the royal family in Elphegort. Throughout the nation's history, it remained a political and economic center for the nation.

At some point in Elphegort's history, the city became its capital, divided into five districts.[1] Prospering under the nation's monoracial principles, Aceid continued to be used as the home of the Elphegortean Royal Family for the succeeding centuries.[2]

During the early EC 490s, the Freezis Family flourished as merchants, eventually buying a noble title and moving into a mansion in the Northern District. During the Green Hunting in EC 500, Aceid was invaded by the Lucifenian army, forcing King Thorny Elphen to flee north while the Freezis Family was arrested and deported to Lucifenia.[3] As many attempted to flee from the invading forces, the city was captured.

After the main target was confirmed dead, the city was occupied by Lucifenian forces as the war continued.[4] Once revolution swept up the Kingdom of Lucifenia, Aceid was eventually retaken by the time Lucifenia surrendered. With the return of its royalty, Aceid continued to act as the capital. Sometime after, the Freezis Foundation established the Schuburg Newspaper Company in Aceid to spread news throughout the nation.[5]

On August 15, EC 609, Deputy Mayor Banner was attacked by Père Noël, though he survived. On September 1, the popular Lucifenian singer Rin Chan arrived in the Southern District and was greeted by swarms of fans.[5] On September 10, Rin performed at the Central Theatre and later left the city.[6] After Dr. Marx Felix was discovered in a coma on September 19, he was moved to a hospital in Aceid.[7]

By mid-October, EC 609, the World Police halted traffic between Aceid and Toragay to quarantine the town from its local epidemic.[8] After survivors were confirmed alive on November 15, they were transferred to the hospital in Aceid to receive treatment. Following numerous reported citings of the allegedly abducted Rin Chan in the capital,[9] Justea investigator Ayn Anchor tracked the famed singer down in August of EC 610.[10]

In EC 999, Aceid was completely decimated by Punishment. Following the end of the Third Period, the destruction site merged with the Hellish Yard along with the rest of the ground world.[11]

The Northern District[note 2] of Aceid was majorly populated by the upper class citizens of Elphegort, such as businessmen and the royal family itself. It was connected to the Central District and contained the Elphegortean Royal Palace and the Freezis Mansion.[1]

Similar to the Northern District, the Western District[note 3] was occupied by nobility and upper class citizens of Elphegort.[1]

The Eastern District[note 5] of Aceid was populated with lower classed citizens, such as immigrants who suffered from Elphe prejudice and the poor.[1]

The Central District[note 6] was the connecting point between the other four districts. In there were built numerous inns and it had a strong commerce.[1] It is presumably the location of Central Theater, its main opera house.[12]

Werra[note 7] was a bar in Aceid's southern district that existed during the second century EC.[13]

The headquarters of the Schuburg Newspaper Company. The company operated its business from there.[6]

The headquarters of the Yarera-Zusco Firm. The Yarera Family operated its business from there.[14]

A factory owned by the Yarera-Zusco Conglomerate, located at the edge of town. Originally used for making airplanes, it was later abandoned and used as a hideout by Zeus.[15]

A poor area within the city. Unemployed Elphes were settled there. During the EC 900s, it was partitioned into territories as part of the war between the Zeus and Hades gangs.[15]

Aceid as it appears in Hatsune Miku and Future Stars: Project Mirai
Add a photo to this gallery

Retrieved from "https://theevilliouschronicles.fandom.com/wiki/Aceid?oldid=189943"
Community content is available under CC-BY-SA unless otherwise noted.