Also that lich illustration just looks kind. doesn't matter at all for the quality of the image I just like it

Lich's avi ! there's nothing wrong with the suggestion for adam, both it and adam's current avi have the same issue (not being head on) so the difference is really just down to art style and at what point in his life it comes from. it might be better to use your suggestion if only because it represents him in his royal scientist outfit? but then eve's head being just in frame might make it a slightly worse candidate if that matters

Oh actually it just occurred to me. this is the canonical graveyard ending that was described in the heavenly novel isn't it? so it's already canon to evillious

The problem here is that it isn't exactly like any of the other spin offs. people on the fourth period don't retain their memories, and as far as we know none of the characters in the spin offs have been main characters from evillious (there is of course amostia, but he was split up into two different characters)

This is a direct continuation with all of the characters retaining their memories and traits, and it's very much so a continuation of their character arcs. and with the seeds planted in the clockwork lullaby album and the implications of the court ending we'll probably have another situation like it at some point. It might be better to figure out something new for it, or at the very least figure out how we want to handle character pages for the evillious characters involved in these spin-offs

Personally I prefer the scans. you can't see the texture of the pages when they're squashed down, but you can click on the image and see much more detail ! it's nice, especially when you're looking for a quick reference image.

Moreover, I don't really see the point of arguing that there's something wrong with the colors when not only are they scans of the physical prints (printing tends to change how color looks in general, meaning it's representative of the physical copies of the novels), but we have those exact same scans in more or less every gallery page at this point.

I actually prefer the earlier suggestion you made, but I'd rather we use this one over his current avi

No worries ^^ and alright !

Oh and, what do you think of the edit to eve's avi? you asked me to do it and then never commented on it jkfldsa

I didn't originally because the text is Very much so visible ! but if you guys think it's okay then we could use this? 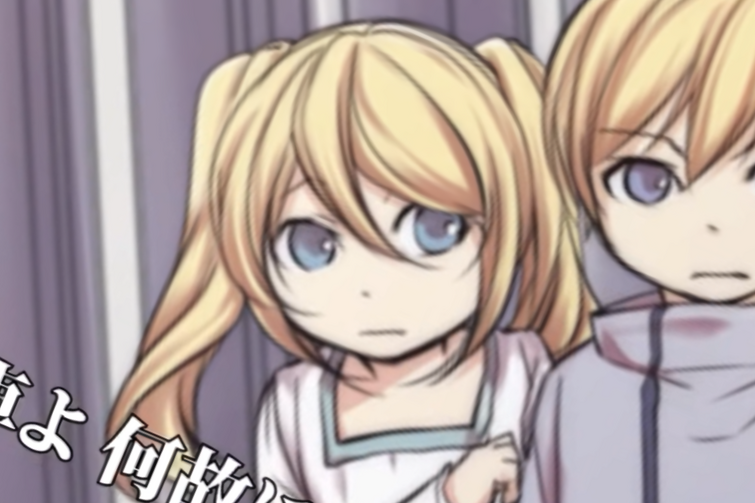 How about this for irregular adam's avi? 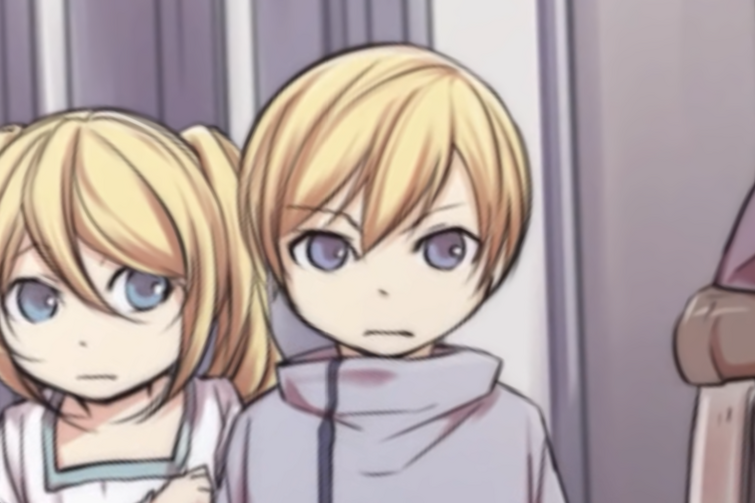 that's possible ! though the voice in banica concerto sounded intentionally Robotic, I'd almost thought it was meant to be the computer itself (it'd also be sad if gallerian didn't get to spend his new life with his daughter after everything he did to try to get her back)

I'd assume that it's the girl who lost her sight, because that's the only part of the description we don't understand (and it would explain the miku voice in banica concerto), but ! I also wouldn't be surprised if it turned out to be amostia either ! since amostia's plotline was tied into outlaw and lychgate ! the two stories were presented Together so it'd make sense if they continued to be relevant to each other down the road !

I'm not saying that I think mothy Won't justify the change (and I really like the Rin+Iroha point jklfdsa, it's very on brand) but that I don't think mothy would have to justify it in canon for the connection to work because of the circumstances. "will he" and "can we make this connection at all if he doesn't" are two different questions. like octo said, I think making triva points on the song pages about the connection between the two pvs (and the album booklet for CL) would be enough to let people draw their own conclusions without having to say for sure if and how it's connected to irina or maria

I think we should continue listing the CL Rin as an unknown character as well, but I don't think the change in vocaloid really Needs an explaination. clockwork lullaby was created when mothy only had rin and len, and switching the entire vocal could be too big of a change for him. and as for irina, we already have an example of a character being reborn and represented by a different vocaloid (levia being reborn as nemesis)

the details around clockwork lullaby are still very vague, even (and especially) with the album booklet, but I don't think the difference in vocal means anything for whether or not it Can be connected to irina or maria. the issue right now is that we don't know the specifics of how

we still don't understand maria's motivations, but it seems far more likely that maria, who was at the center of project ma, would have the goal of "creating" someone, especially with her continued cooperation with Levia-Behemo and the senate despite being Aware that she's being lied to

and ! I suggested that we be more vague with who the "ghastly voice" is further up in this conversation misstress ! I'd suggest reading through it because I have a fairly detailed theory about what it could mean as well as a more detailed suggestion for what to do ! that said, in my opinion mothy's been trying to make the connection to allen clear since the heavenly novel, this is just the final nail in the coffin

outlaw and lychgate and the evils extras album booklet already more or less confirmed that seth was the "him" in banica concerto, introducing his involvement with lich and the fact that hansel and gretel see him as their father among other things. that said someone provided a rough machine translation of the song preview on my server, and while I wouldn't use it as a source for understanding the song it more or less confirmed that carlos was included in the list of friends (as someone who'd been with them from the beginning) with "him" being seth.

there's a line up of the people in the theater that's listed as "incarnation of a mask; Twin rabbits, Black bird; Next, a bear and a blue dog." and while I wouldn't put stock in this specific word choice, it's pretty clear who's who regardless