I had understand that mothy is reading a book about the Original Sin Story.

I want just now is that real or not ?

Admin Message: This is a thread for discussing the new OSS Story novel by mothy titled Original Sin Story: Crime, released last December. As always, keep replies civil, productive and concise. When giving second-hand information, please link to a source, in order for there to be accountability.

While I'm here a couple thoughts.

Held was not involved in the creation process of humanity at all, so there's no reason to think that he had anything to do with what powers his inheritors had.

If different Inheritors were able to cancel each other out, Elluka wouldn't have been affected by Eve's brainwashing in Gift, as Elluka was in the body of a Rahab inheritor at the time.

It's confirmed that Elphe's were based off Held. Is it so crazy to assume that in the process of creating humanity, everyone was asked what they wanted their Inheritors/Vesels abilities to be? It's possible everyone on Climb One was going to have Inheritors, but were killed before it could be implemented. Hence why every spirit has special abilities. It also explains why Marie was able to have specific powers as a Demon, despite not being a scientist. Same for Salem.

That's a valid point. But there's factors than just Eve, Elluka, and Rahab. Even though he was sleeping, Behemo's soul could have negated Levia's powers. While yes the Body gives you their abilities, true magic comes from the soul. Eve's active ability could have over powered Levia's passive one, maybe even feeding off it because she is a Levia inheritor.

There is nothing really suggesting that inheritors was a deliberate thing done on the part of the Climb One crew rather than a fluke or accident in creating a new humanity. There's also nothing stating that the abilities that the demons have are a result of being scientists--my understanding was that they gained their abilities in the process of being turned into demons. The fact that the only spirits who have abilities are Eater and Lich, and that it's implied these were given to them by Banica, supports this idea.

I'm not sure what "true magic" has to do with it, given that both Eve's ability and the Purple Dream power are stated to be Inheritor abilities, which are explicitly not the same thing as magic as stated by Adam. How could Behemo's soul have negated Levia's purple dream ability? What "power" does Behemo's soul have that would do this? How can inheritor abilities "feed" off of each other? (and in case I need to restate it, the inheritor ability Levia has is Rahab's because she is in Lukana's body, not because Levia is stated to have any inheritor powers herself). I'm still not sure how this relates to your original point on Elluka and Irina--how does being able to summon fire negate another person's ability to sense HER?

Like, these things are theoretically possible if you make up a bunch of new mechanics that have never been talked about before, I just don't see evidence pointing to it as is.

Friendly reminder that this is a thread for discussing the OSS: Crime novel. Extensive theories and speculation go on the Theories Discussion Board.

Is there any word if there will be a follow up to this novel? The title implies it would be a two parter, at least.

Mothy has said that there will be a second novel, but we don't know when it'll be released.

Hello. I remembered that back in August 2019 mothy tweeted this picture mentioning the winter comiket, and as we know the OSS:C novel got released there a few months afterwards.

I know there is no official confirmation from mothy's part, but what do you think of this pic as Magic Kingdom Levianta's crest?

As for why I think it's MKL's crest: it has Levianta's symbol in the centre, with two dragon-looking heads, with a crown on top (symbolising that it's a kingdom), and the 12 gears at the bottom (like the 12 royal capitals) in the shape of an M. and wings because dragons fly i guess 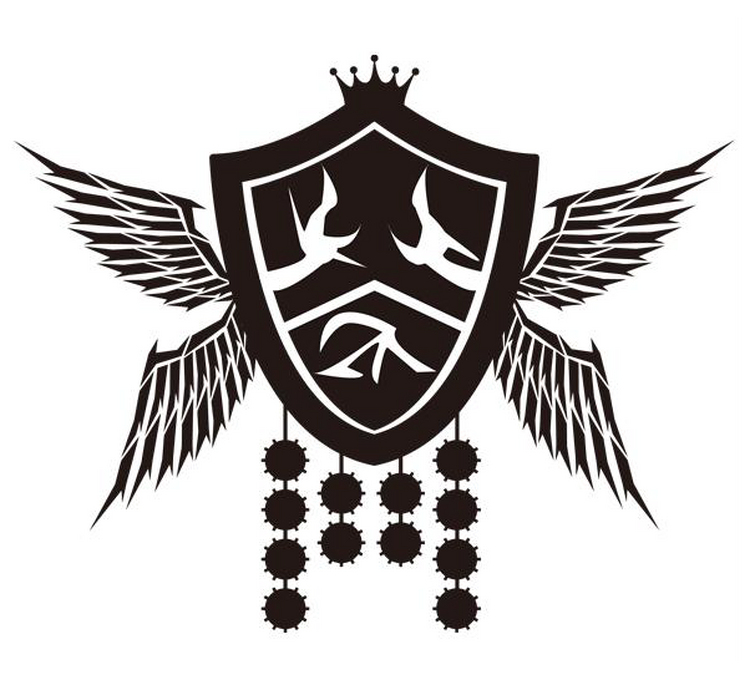 I mean, I can't imagine why this symbol would appear over and over on OSS Crime printing with Leviantan symbols plus the 12 gears with the explicit mention of 12 capitals if it wasn't the MKL crest. It is annoying that it isn't stated outright, but I do think it's a safe assumption even if somehow retconned in the next book. Even if it's somehow wrong it won't be a hard fix.

I agree, I think it's a safe assumption to make.